Tooradin is a small town which services the traffic on the South Gippsland Highway, most of which is heading for Phillip Island. Consequently it is well supplied with good fish and chips shops and has some pleasant walks and boardwalks around the marshy mangroves which characterise the northern extremity of Western Port.

Tooradin is located 65 km south-east of Melbourne on the South Gippsland Highway.

Tooradin, or more correctly, "too-roo-dun" is a local Bunurong Aboriginal term for a monster which reputedly resided in a local waterhole. It seems to be the local word for what is called a "bunyip".

Sawtells Inlet Foreshore Reserve
Sawtells Inlet is a tidal channel which meanders through parkland north of the South Gippsland Highway. There is a pedestrian bridge which connects the car park to a small section of the foreshore known as 'The Island'. There are bollards and wooden sculptures of a sea eagle, a pelican, a lighthouse, a seal and an impressive depiction of an "old salt" carved out of the huge stump of a tree.

Around Foreshore Road - Soldier Crabs and Mangroves
South of the highway there are picnic and foreshore reserves as well as a boat ramp, jetty, a boardwalk and a lookout with panoramic views over the mudflats and mangroves. A sign titled "Soldier Crabs and Mangroves" on the foreshore points out that "If you stop and look around at these mud flats at low tide, you are sure to see tiny Soldier Crabs ... thousands of them!" It then goes on to explain the importance of the mangroves and that "the White Mangroves at Western Port form the largest mangrove community this far south of the equator."

Dolphinfish and the Commonwealth Games
A wooden footbridge crosses the inlet just south of the highway and there is a large sculpture of a fish. It was originally used as part of an aquatic display for the 2006 Melbourne Commonwealth Games. The informative sign beside the fish sculpture explains: "The Dolphinfish (Coryphaena hippurus) is one of the fastest moving fish in the ocean and an excellent sporting fish due to the fact that it fights hard to resist being caught, even leaping out of the water. It is distinguished by the long dorsal fin that runs the entire length of its body and its prominent forehead. It is also one of the most beautiful fish in the sea with its iridescent colouring. When the fish is under stress the colours change rapidly from blue to green to yellow. The Dolphinfish can be found worldwide in tropical and sub-tropical waters. It is not related to the dolphin which is a mammal.
"The Dolphinfish was one of the 72 aquatic sculptures, each representing a Commonwealth nation, that Mothers Art Productions were commissioned to make for the spectacular celebrations on the Yarra River as part of the 2006 Commonwealth Games in Melbourne. It represented Malta where it is known as the Lampuka. In other countries it is also known as the Doraho or Mahi Mahi."

Fisherman's Cottage Museum
Located on the foreshore, almost opposite the jetty, at 13 Mickle Street, the museum is one of the original fisherman's weatherboard cottages which was built around 1873. It was probably built by an early landowner, Matthew Evans, and is typical of the fisherman's cottages which were built in the area. The cottage was going to be demolished when, in 1968, the Cranbourne Shire Historical Society, with help from the local shire, managed to save it. It now houses displays of local memorabilia, farm equipment, photos and information about the town and district. The museum is open on Sunday between Noon and 4.00 pm. Tel: (03) 5998 3643 or check https://seha.org.au/fishermans-cottage-museum-complex-tooradin.

Tooradin Jetty and Shed
Along the road to the foreshore, and opposite the Fisherman's Cottage, is the Tooradin Jetty and Shed. Fishermen have used the jetty since at least 1890 and they operated from the area until 1999. There is evidence that they were fishing in the area as early as 1876. The shed was used to store fish with ice being delivered from Dandenong and the fish being sent to Melbourne via the train which stopped at the Tooradin station.

Harewood Homestead
Harewood Homestead was built in 1868 by Scotsman and pastoralist, William Lyall, who had purchased the 'Tooradin' estate in 1853. He imported sheep, hares, sambur deer, cattle, shetland ponies, partridges, pheasants, Cotswold sheep and horses, became a respected breeder of livestock and experimented with oyster cultivation. By the late 19th century, Harewood was the social centre of northern Western Port. Guests included John Francis, Premier of Victoria and Lord Hopetoun, Governor of Victoria and later the first Australian Governor-General.
The homestead is built of handmade bricks with a stuccoed exterior and features a tiled veranda on three sides, decorative ceilings, a gabled central hall and views over Westernport Bay. Interestingly, the columns act as drainage pipes for water that was stored below the ground. The homestead is located at 3310 South Gippsland Highway, about 5 km east of Tooradin, just beyond the Tooradin airfield and it is open occasionally for charity events. For more detailed information check out https://harewood-house.com.

Koo Wee Rup Observation Tower
Located 2 km south-east of Koo Wee Rup at 3585 South Gippsland Highway, is an impressive observation tower which overlooks the remnants of the Koo Wee Rup wetlands, the Bunyip River, Westernport and French Island. When Europeans arrived in the area the swampland covered 100,000 acres from Sawtell's Inlet on Westernport Bay to Bunyip in the north-east. The first European to sing the praises of the wetlands was William Hovell who was hugely impressed with the grassy flats at the southern edge of the marshes. He attempted to traverse the swamplands but, after 15 km, was forced to abandon the journey. Crossing the swamplands was inhibited by a thick layer of peat beneath the shallow surface of the water. The peat was formed by decomposed rushes and reeds.

Tooradin Estate Riding and Equestrian Facility
Located at 300 Lynes Road is 'Tooradin Estate', a historic homestead built in the late 1880s which was originally a sheep and grazing property and is now a horse riding school. The brick house is considered typical of the Victorian Classical style of the 'boom' period. It features a slate roof with an encircling veranda that is capped by bull-nose roof. It is listed by the Heritage Council. For more information check out https://vhd.heritagecouncil.vic.gov.au/places/65339. For more information tel: (03) 5998 3205 or check out https://www.tooradinestate.com.

* Prior to the arrival of Europeans the area was home to the Bunurong Aboriginal people.

* Sealers from Tasmania started using the area in the early 1800s.

* The first European to closely scrutinize the shoreline of Westernport was William Hovell in 1826-27. Hovell had accompanied Captain Wright on his abortive attempt to establish an agricultural and military settlement on Phillip Island and then at Corinella.

* By 1839 settlers were establishing cattle runs in the district.

* In 1840 Frederick and Charles Manton took up land and named their property Tooradin.

* By 1852-1853 Tooradin station had been taken over by John Mickle, William Lyall and John Bakewell.

* In 1869 the first subdivision of land occurred in the town. That year saw Tooradin Inn built.

* In the 1870s Tooradin was just a depot for local road construction.

* The local Post Office was opened in 1877. That year saw a regular coach service from Melbourne.

* By 1918 it was a popular holiday destination for Melbournians.

There is no Visitor Information Centre in Tooradin.

There is useful information at https://www.travelvictoria.com.au/tooradin. 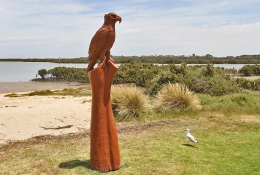 The sea eagle sculpture on the foreshore 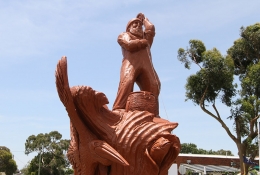 The Fisherman sculpted out of a tree trunk near the foreshore 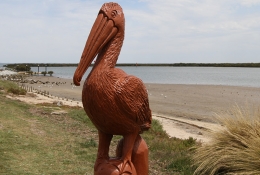 The penguin sculpture beside the foreshore 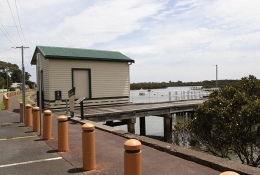 Tooradin Jetty and Shed - with mangroves in the distance 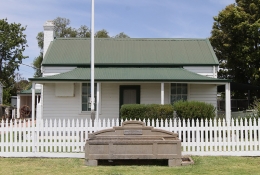 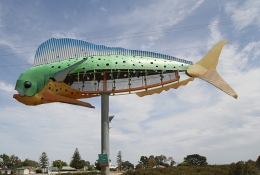 The Dolphinfish sculpture on the main road 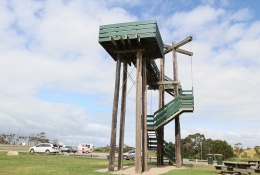