Trangie is small rural service centre in the Macquarie Valley Irrigation Area. It is located on the Mitchell Highway between Narromine and Nyngan. Trangie is notable for its fine corner-block pubs and a townscape dominated by the Trangie silo - a testimony to the importance of wheat to district. The district is also known for fat cattle sales, vast cotton fields, sheep, wool, sorghum, soyabeans and corn. Over the years the town has been ravaged by fires and floods and, with the arrival of serious global warming, it is subject to heat waves in summer. In the summer of 2012/2013 the temperature in the town reached a new recorded high of 46.1°C.

Trangie is located 461 km north-west of Sydney via the Great Western Highway, Orange and Narromine. It is 220 metres above sea-level.

The area is thought to have been occupied by the Wongaibon Aborigines prior to white settlement. 'Trangie' is an indigenous word said to mean 'quick'. It was first used by Walker and Cornish when they took up land in the area and called their property Trangie.

A Walk Back in Time
Located in the town library (in Dandeloo Street) on a wall is a collection of descriptions and information about interesting buildings in the town.

Railway Station
The township did not develop until the railway arrived in 1882, en route from Dubbo to Nevertire. The railway station was completed in 1909. It consisted of a 400 gallon iron tank, taupaulin, rule book, hand lamp and tin of oil.

Lindsay's General Store
John Lindsay arrived in Australia from Ireland in 1852 and opened a general store in Trangie next door to what is now the Imperial Hotel in 1883.

Trangie Post Office
Located in Dandaloo Street, the Trangie Post Office was opened in 1904. There had been a post office in town since 1883. The current post office was built at a cost of £723.15.0 and opened on 6 August 1904. Amusingly the town had five postmasters between 1887 and 1897 with all seeking a transfer because of the extreme summer heat.

Trangie Hotel
Variously known as the Trangie Hotel, Commercial Hotel and Jackaroo Hotel, a hotel has been on this site since 1883 when John Campbell proudly announced that it was opposite the railway station, had "Good stabling. Plenty of yards. Careful groom" and the porter meets all trains. It was destroyed by fire in the late 1920s and rebuilt.

School of Arts
Further down Dandaloo Street, and looking more like a hotel than a School of Arts, is a handsome building dating from 1929 which, at the time, cost £3050. It is now used by the local chemist.

Gin Gin Weir
Gin Gin Weir, built in 1896, is located 25 km north-east of Trangie on the Macquarie River. It is a popular picnicking, boating, fishing and bushwalking spot with a sandy beach. To access it take the Collie Road for 14 km and just before reaching the bridge turn right for 9 km and then look for the sign. It is a few kilometres further on a dirt road. The weir was originally constructed to divert the Macquarie River into Crooked Creek. A concrete weir was built but cut down to its present height of 5.5 metres after being damaged by the floods of 1903. It is 110 metres long.

Cobb & Co Heritage Trail
In 2004 the legendary coaching company, Cobb & Co, celebrated the 150th anniversary of its first journey and the 80th anniversary of its last. The company's profound contribution to Australia's development was celebrated with the establishment of a heritage trail.
Cobb & Co's origins lay in the goldrushes of the early 1850s. At its peak Cobb & Co coaches were travelling 28,000 miles (44,800 km) a week. They had a total of 30,000 horses and were harnessing 6,000 horses every day. There was a total of 7,000 miles (11,265 km) of regular routes throughout Australia and the web of routes from Bathurst to Bourke were part of 2,000 miles (3,218km) of coach routes which stretched from southern Victoria to the Gulf of Carpentaria and criss-crossed eastern Australia.
The Cobb & Co Heritage Trail booklet explains that "known as 'whips', or Jehus, the drivers were Australia's heroes of the 19th century. They had to contend with heat, dust, bush fires, flies, mosquitoes, rain, fog, bog, snow, snakes, kangaroos, bushrangers, difficult passengers and post office schedules which demanded the mail be on time or a heavy fine would ensue ... Horses were changed every 16 miles (25.6 km) or so at changing stations, sometimes combined with bush shanties or inns where the passengers could get a meal, drink, or a few hours sleep."
There is a specific brochure on Trangie on the Cobb & Co Heritage Trail. It tracks the route through the shire from Dandaloo through Trangie to Gin Gin and on to Warren.
The notes point out: "Dandaloo was a coach stop and settlement on the road from Peak Hill to Nyngan and Cobar. The town boasted two hotels, a store, racecourse, post office, police station and Cobb & Co changing station ... the road from Dandaloo to Trangie follows the tracks of Cobb & Co" and "Cobb & Co operated the mail run from Dandaloo to Trangie. The mail coach left Dandaloo at 4.30 am for Trangie, returning at sundown. At the Boggy Cowell near Trangie water sometimes came up to the coach floor as the coach teams crossed the plain. Trangie's Royal Hotel dates from the days of Cobb & Co ... the Cobb & Co changing station was located near the former Post Office. This building is visible from the road."

* Prior to the arrival of Europeans the district was occupied by the Wongaibon Aborigines.

* The town developed on 'Weemaabah' station which was established in the 1830s. It was used for the grazing of cattle and, later, for sheep-grazing and horse-breeding.

* The Cobb & Co. coach service from Dubbo to Bourke passed through the property and stopped at the Swinging Gate Hotel, up-river.

* In 1866 Walker and Cornish established a property which they named Trangie.

* Trangie came into existence as a railway camp in 1881. It was where the workers set up camp while building the railway.

* A township did not develop until the railway arrived in 1882, en route from Dubbo to Nevertire.

* The first settler in the town was John Campbell who opened the Trangie Hotel.

* In 1909 an experimental farm was established to develop wheat-growing and the breeding of merino sheep.

* The railway station was completed in 1909. It consisted of a 400 gallon iron tank, taupaulin, rule book, hand lamp and tin of oil.

* An Angus beef cattle stud was established in 1929.

* In February, 1955 the town was so badly flooded that every house was affected.

* Local agriculture expanded when Burrendong Dam was completed in 1967.

* In the summer of 2012/2013, dubbed The Angry Summer by the Climate Commission, the temperature in Trangie reached a new recorded high of 46.1°C.

The best place for information about Trangie is the local library in Dandaloo Street. The main information centre in the area is the Narromine Visitor Information Centre, 37 Burroway Street, tel: (02) 6889 9999. Open Monday to Friday 9.00 am - 3.00 pm.

There is a local website - http://www.trangie.net - which has details of accommodation and eating in the area. 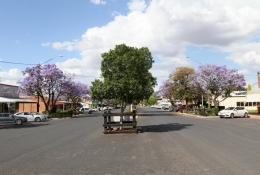 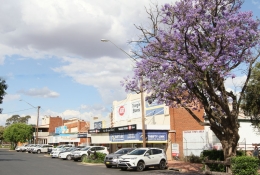 A jacaranda in Dandaloo Street. 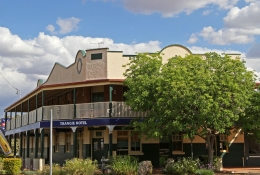 The Trangie Hotel on the corner of the Mitchell Highway and Dandaloo Street. 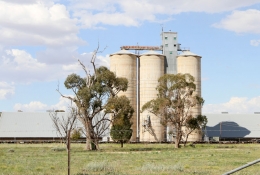 The pool and picnic spot below Gin Gin Weir 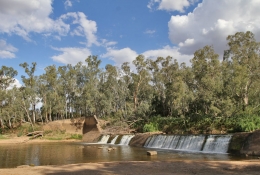