Trentham is a timeless rural township situated near the Wombat State Forest. It sits on a spur of the Great Dividing Range at an elevation of 800 metres. The town is surrounded by trees and the buildings in the main street are typically timber with awnings covering the footpaths.  Eucalyptus distilling, charcoal burning, saw milling and firewood-cutting were carried out in Wombat State Forest which is dotted with tiny settlements - East Trentham, Blackwood, North Blackwood, Barrys Reef, Newbury, Simmons Reef, Lyonville, Little Hampton and Fern Hill.

Trentham is located 95 km north-west of Melbourne via Macedon and Woodend.

No one is sure how Trentham got its name but a plausible explanation is that it was named after Trentham in Staffordshire, England. There is no easy explanation.

Trentham & District Historical Society Museum
Located at 3-5 Camp Street, the Historical Society Museum occupies the old police station and slab lock-up. The website (http://www.trentham.org.au/historical-society) explains: "Our society gathers information and artefacts that we can make available to those interested in our district's local history or the history of families who have lived here. We cover Trentham, East Trentham, Fern Hill, Tylden, North Blackwood, Spring Hill, Little Hampton, Garlicks Lead, Newbury. We are responsible for the conservation of the old police station." It is open by appointment. Tel 0428 464 225.

Two Bills Horse Troughs
There are two old Bills horse troughs in town. One is located at the intersection of High Street and Cosmo Road and the other is by the butcher's shop in Market Street near the High Street intersection. There is an excellent website which tells the story of the troughs (check out https://billswatertroughs.wordpress.com). Here is a summary of the history of the troughs: "George Bills died in December 1927 and after providing many personal bequests, George directed the income from the residue of his estate to be used to provide drinking troughs for horses, and other animals he said it was in preventing cruelty, and alleviating the sufferings of animals in any country. He wanted no animals to go thirsty. There were probably more than 500 troughs made and erected in Australia mostly first in Victoria then in New South Wales and, and others were funded in overseas countries England, Ireland, Switzerland [for donkeys] and Japan. In the early stages of trough supply, each was individually designed and constructed. One of the firsts was a granite Memorial trough, hewn in one piece as a memorial to George Bills. It was situated in Barton Street, Hawthorn, Melbourne; the trough has long since been removed. Later a standard design from a mould made at the Rocla Concrete Company was used and many hundreds of these troughs were supplied throughout Victoria and New South Wales. The troughs were supplied free of charge after an application to the Bills Trust by local councils. Truckloads of 10 would often leave the Rocla Factory for installation in country towns. Most of the troughs were made and supplied in the mid 1930s in Victoria."

Take A Walk Around Trentham
Available for purchase (it was $5.00 in 2020) at the Newsagency. It is a useful guide to the places of historic interest around the town.

Trentham Falls
Located 2 km north of the town is the car park from which there is a short walk down to the beautiful Trentham Falls. The Northern Lookout offers excellent views over the Coliban River which falls 32 metres over basalt columns which were originally formed some five million years ago by an ancient lava flow. These are the largest single-drop falls in Victoria. The reserve protects an example of ancient, pre-colonial vegetation comprising tall open forest of manna gum, messmate, stringybark and narrow-leaved peppermint, changing to woodland on the drier and more exposed sites. It is an excellent spot for picnics and bushwalks.

Domino Rail Trail
This 5.91 km rail trail runs from Trentham Railway Station to Lyonville. It is an easy flat track which can be walked or cycled. There is an excellent and detailed description of the trail at https://walkingmaps.com.au/walk/3644.

Garden of St Erth
Located at Simmons Reef Road, to the west of Blackwood (which lies 15 km south of Trentham), is the Garden of St Erth, a sandstone cottage set in beautiful gardens, which was built by Matthew Rogers in the 1860s. It is currently run by The Diggers Club, an organisation committed to sustainable gardening. Their website http://www.diggers.com.au/gardens-cafes/gardens/st-erth.aspx explains that "The Garden of St Erth features an extraordinary range of espaliered fruit, heirloom vegetables and drought tolerant flowers. Thousands of naturalised daffodils carpet the lawns in September, and through the summer months the herbaceous border features Diggers perennials and grasses. The garden culminates in an extravagant display in March for our Autumn Festival. May marks the end of our gardening year with a blaze of autumn-coloured trees and late perennials. Cocooned in the Wombat State Forest, the bush garden plays host to a variety of native birds, as well as being a place of restful contemplation. The natural spring of Koban's pool is a cool place to escape the summer heat." Tel: (03) 5368 6514.

Wombat State Forest
The Wombat State Forest, an area of 75,000 ha which lies 19 km to the east of the town. It was exploited by gold prospectors and has been a major source of timber for the district. A few remnants in more remote parts of the forest indicate the nature of the flora here in pre-colonial days - tall open eucalyptus forest, woodland in the drier areas, strips of mixed wet sclerophyll/temperate rainforest with ferns along the watercourses. About 100 species of wildflowers and orchids can still be found in bushland areas. It is known as a popular area for camping, bushwalking, horse riding, 4WD exploring and trail bike and mountain bike riding.
There is a Wombat Forest Drive, which is a 50 km route through the State Forest, which starts in Blackwood and includes lookout points, mineral springs and gardens. There are also a range of walks in the Wombat State Forest. Check out https://www.alltrails.com/parks/australia/victoria/wombat-state-forest which offers details of the 19.3 km Wombat Loop; the 16.9 km Yankee Creek Loop; and the 9.8 km Wombat MTB Trail.
Highlights of the Forest include McLaughlin Lookout (830 metres above sea level), to the west of Blackwood, which offers excellent views of Mount Macedon, the You-Yangs and the Dandenongs. It is located near the junction of the Blackwood Ridge Road and Wheelers Track.
There is also Nolans Creek forest site where a mill was established at the junction of Nolans Creek and the Lerderderg River in 1887 with a tramway connecting it to another mill further east. A mill was established on the site by Edward Firth in 1934 with houses for millworkers and a network of tramways which provided the basis of some of the present roads and tracks. To reach it from McLaughlin Lookout continue west along Blackwood Ridge Road and turn right into Nolan Creek Road. After about 4 km the driver will reach a T-intersection with Lerderderg Road. Turn right and the forest site is to the left.

Lerderderg State Park
The Lerderderg State Park lies to the south of Blackwood (which is 15 km south of Trentham) and covers 14,250 ha. It is noted for the 300 m gorge which cuts through the park as it heads southwards towards Bacchus Marsh. The gorge helps create a sense of diversity of vegetation (there are over 320 tree species in the park) with fern gullies, dry open forests (stringybark and ironbark forests exist) and wildflower displays in the spring. The main appeal of the park lies in its proximity to Melbourne. It offers camping, (O'Brien's Crossing is the only designated camp site in the park), bushwalking, picnicking, fishing, swimming and driving.
It should be noted that the park is a nesting site for both Wedge-tailed Eagles and Peregrine Falcons; has significant stands of Blue Gums and Manna Gums; and is recognised as being of international geological importance. The Lederderg River is recognised as a Heritage River. About 1 million years ago the land was uplifted along the Rowsley fault and the Lederderg River cut through the sediments and more resistant sandstones to produce massive cliffs. At the southern end of the park the river cuts through and exposes rocks which date from the Permian era (280 million years ago) which show signs of glaciation.
There are a number of good walking tracks in the park. The most challenging is the three-day walk from Blackwood to Mackenzie's Flat along the Lerderderg River. There are many other shorter walks including a walking track which follows a gold mining era water race.
Both Mackenzie's Flat and O'Brien's Crossing have good picnic facilities with toilets and electric barbecues. Standard two-wheel drivers will find that there are excellent views across Lerderderg Gorge from O'Brien's Road.
There are three short walks mentioned on the Parks Victoria website.
(1) Mackenzie's Flat to Grahams Dam return - 3 km, 1 hour, an easy walk upstream to a pool which, in summer, is ideal for swimming.
(2) Blackwood Mineral Springs to Shaws Lake and Sweets Lookout - 3.5 km, 90 minutes which passes the historic "lake" and provides excellent views from the lookout.
(3) O'Brien's Crossing - Byers Back Track - The Tunnel - 3 km, 90 minutes - this track follows the old water race around the valley and provides fine views of the valley.
There is also excellent and detailed information at http://bushwalk.com/forum/viewtopic.php?f=46&t=4933 with lots of informed walking commentary.

* Prior to the arrival of Europeans the area was home to the Woiwurung Aboriginal people.

* Trentham was first settled in 1855 after the discovery of gold in the area the previous year by two farm workers who had wandered up the Lerderderg River in search of lost bullocks.

* The vast timber resources of the area were exploited from that time with a number of mills emerging in the Wombat Forest.

* The railway arrived in 1880. It connected Carlsruhe to Daylesford.

* By 1890 over 20,000 tons of produce (mostly timber) was being transported from the Trentham railway station.

* In 1893 Benjamin and William Trewhella purchased a timber mill.

* The brothers invented the once indispensable Trewhella jack-and-stump grubber at their local foundry.

* A timber impregnation factory was opened in the town after World War II.

There is a useful local website. Check out http://www.trentham.org.au. 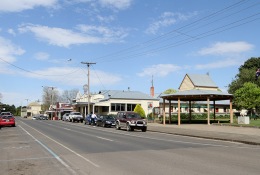 The main street of Trentham 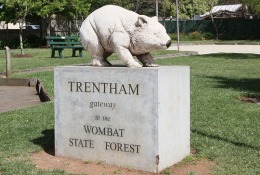 The wombat in the park in the main street 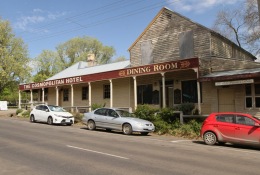 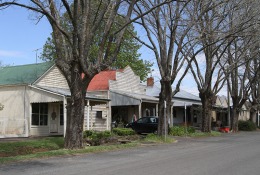 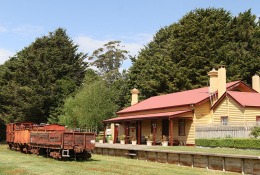 The Trentham Agricultural and Railway Museum 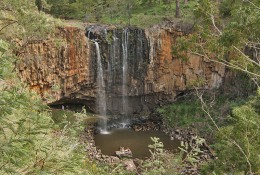 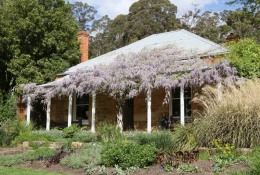 The Garden of St Erth cottage, dating from the 1860s, covered in wisteria.