Tuena is a small settlement - not much more than a few houses and a general store - which was once a thriving mining community. The setting at the edge of the Blue Mountains and the Southern Tablelands makes it particularly beautiful in spring and autumn.

287 km west of Sydney via Bathurst and 297km via Goulburn, 85 km south of Bathurst, 20 km from Abercrombie Caves.

The name may have been derived from the language of the local Burra Burra people. The word possibly means 'string of waterholes'

Exploring the Town's History
The fascination of most old gold towns lies in simply standing in the main street (Bathurst Street) and trying to imagine that once thousands lived here and the surrounding area was alive with the excitement and noise of miners all digging and fossicking and hoping to find their fortune. Fossicking is still popular in the area. Panning equipment is available at Parsons General Store.

Take your time and walk around town. Some of the old buildings offer an insight into life in the town in the nineteenth century. A good place to start is Parsons General Store (1860) which features old cedar counters and a small museum display. They have an "historic walking tour" brochure which guides the visitor to the Bookkeeper's Cottage (1861), a wattle-and-daub building which was used for tallying gold; the Goldfields Inn (1866) reputedly the oldest licensed wattle-and-daub hotel in the country (it is currently closed and being used as a private residence); St Marks Anglican Church (1886); the Tuena Public School (1889); the elegant local stone St Margaret's Presbyterian Church (1890); a suspension footbridge and the police station (1900) .

Swimming, fishing and canoeing
The surrounding rivers and waterholes are popular spots for fishing (it is a good trout fishing area), swimming and canoeing . Green's Bluff, adjacent the recreation ground, is the local swimming spot in summer.

• Gold was discovered at Tuena in 1851. The popular folk tale is that a Reverend Douglass, travelling to Tuena for a christening, stopped to boil his billy at Limestone Creek, and found a gold nugget under a stone. Hearing of the find, miners rushed to the area.

• In 1852 gold worth more than $3 million (in current currency) was extracted from the Tuena field. A police station was opened that year.

• Within a few years Tuena had a population of more than 500.

* Miners from Tuena travelled to Abercrombie Caves (see entry) on Saturday nights and dance in the main cave.

* The bushranger Ben Hall and his gang bailed up an inn near Tuena in 1865.

* Today the tiny town has a few historic buildings and memories of a brief, dramatic past. 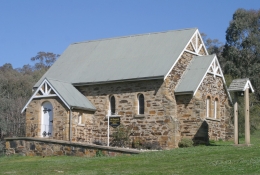