Known as the wettest town in Australia.

Tully is essentially a sugar town. It was specifically created to service the surrounding sugar cane plantations. In recent times it has reached beyond sugar to become a hugely important district for banana growing. Consequently, unlike the idyllic beach locations in the surrounding area, it is known as a town driven by industry which attracts backpackers eager to become rural workers and earn a few extra dollars. The town is famous as the wettest place in Australia with an annual average rainfall of 4.27 metres (4270 mm) and a record for the highest annual rainfall in a populated area of Australia, with 7.9 metres (7900 mm) in 1950. Tully is one of the main sugar-producing regions of Queensland with more than 22,000 ha of sugar cane extending from the Kennedy Valley in the south to Feluga in the north. The harvest season is usually from June to mid-November with approximately 2 million tonnes of cane crushed at the Tully Sugar Mill. During harvest season the mill operates seven days a week, 24 hours a day. Another major industry is bananas, with about 5000 ha of land in the area devoted to the crop.

Tully is located 1547 km north of Brisbane via the Bruce Highway. It is 208 km north of Townsville and 141 km south of Cairns.

Tully is named after the local Tully River. In turn the river was named, in 1872, after William Alcock Tully who was the Under-Secretary for Public Lands, the Surveyor-General and the Chief Commissioner of Crown Lands in Queensland at the time.

Tully Heritage Trail
The Tully Heritage Trail comprises 20 history boards which start at Tully Visitor & Heritage Centre and highlight the important buildings and places around the town. A map of the trail can be obtained from the Visitor Centre. Of particular interest are the Violet Smith Park in the centre of town; the Art Deco buildings in Butler Street; and the Tully Sugar Pioneers, a monument opposite the Golden Gumboot.

Golden Gumboot
Given Tully's reputation as the "wettest town in Australia" it seemed natural that when they were thinking of a suitable "Big Thing" to attract tourists, they thought of a giant gumboot which the community located in a garden bed and adorned with an oversize fibreglass green tree frog which clings to the lip of the boot. It is no accident that it includes a tree frog - the tree frog, at an average of 110 mm, is the largest of its kind in the world. The females produce between 200-2000 eggs each year.
The idea for the giant gumboot was first mooted by ABC rural reporter, David Howard, in the mid-1970s, when he suggested an annual media award for the 'wettest' town to be called the Golden Gumboot. The local Rotary and Lions clubs embraced the idea in 1997. The boot was designed and fabricated by Brian Newell. It cost $90,000 and was officially "opened" in 2003. There is a lot of symbolism attached to the boot. It is 7.9 metres tall which is exactly the highest annual rainfall ever experienced by Tully. The town received 7.9 metres of rain in 1950. (That is 311 inches - or, to put it another way, nearly an inch a day every day of the year). The gumboot features a mechanical rain gauge running from the heel to the lip of the boot and inside is a spiral staircase leading to a viewing platform. Along the walls are photos of past floods. The Boot is located at Tully's Bus Transit Centre, Banyan Park, at the entrance to Tully's main street. Check out http://www.tullychamber.com.au/about-tully/the-golden-gumboot. Not surprisingly the town holds a Golden Gumboot Festival each year.

Hearts Full of Hope Statue
Located in the park with the Big Gumboot is the Tully District Italian Pioneers statue. The statue was officially unveiled in June 2009 and was dedicated to all the pioneers of Tully and particularly the Italians who arrived in great numbers in the 1930s and helped establish the district's sugar and banana industries. The Hearts Full of Hope book, about the immigrants who arrived in the town, is available from the Tully Visitor & Heritage Centre.

Tully Sugar Mill and Tours
The Tully Sugar Mill is a major employer in the area. It processes around 2 million tonnes of cane per year. Tully Sugar Ltd was purchased by the Chinese-owned COFCO company in 2011. Tours occur in the crushing season (June to November) and take place Monday to Friday at 10.00 am, 11.00 am and 1.00 pm and on Saturday and Sunday at 11.00 am. The tours last from 90-120 minutes. It is necessary to book at the Tully Visitor & Heritage Centre, Bruce Highway, Tully. Phone (07) 4068 2288. Check out http://www.tullysugar.com.au/mill-tours for more details.

Mount Tyson
The lookout at Mount Tyson, which lies to the west of the town, provides superb panoramic views of Tully, the islands off the coast and the patchwork of cane fields and banana plantations which surround the town. The summit of Mount Tyson is 640 metres above sea level and Scout Rock (570m) offers an excellent lookout. There is a walking track to Scouts Rock and the summit which is 6 km return. The walk takes 2-3 hours return. The track starts at the end of Brannigan Street next to a large water tank. It is a reasonably strenuous walk and a good level of fitness is needed. You must register your name at Nick and Jean's Supermarket before departing.

Alligators Nest
Located in the Tully Gorge National Park 6 km north of Tully via Murray Street, this is a rainforest park which was originally popularised by a group of local scouts who gave it the name (there are no alligators in Australia). It is a day use picnic area fringed by rainforest which has lilies, palms, fern-leafed tamarinds and water ferns. Part of the appeal of the area is that the rainforest is home to eastern water dragons, nursery frogs and chameleon geckos. It is also possible to see wallabies, possums, brush turkeys, mountain thornbill, scrub wrens, eastern whipbirds and southern cassowaries.

Tully Gorge and Tully Falls
There are two different experiences. It is possible to drive to the Tully Gorge from Tully but to see the Tully Falls it is necessary to travel to Ravenshoe. There is no access to the Falls from Tully. However, the Tully River is very short - only 115 km long it drops dramatically off the escarpment - consequently it has become a favourite place for white water rafting.

(a) Tully Gorge
The Tully Gorge is located 35 km west of Tully on the Jarra Creek Road. The road ends at Kareeya Hydro Station. The area is known as one of the wettest in Australia. The National Parks website recommends the park for "Picnic by rainforest streams; swim in clear, cool water; walk to a mountain summit; or enjoy spectacular gorge views."
For those keen to bushwalk there are three tracks in the National Park:
* Butterfly Walk - an easy 375 metre walk from the camping area. It heads through rainforest which is famed for its butterflies. The best time is between September and February.
* Elizabeth Grant Falls - a 5.2 km one way walk from the Cochable Creek Camping Area
* Djilgarring Walking Track - 15.4 km one from from Cochable Creek Camping Area.
There is an excellent, downloadable map at https://www.npsr.qld.gov.au/parks/pdf/tully-area-map.pdf.

(b) Tully Falls
The views of the Tully Falls are not accessible from Tully. The main attraction is the Tully Gorge lookout which is located 24 km south of Ravenshoe via the Tully Falls Road. For more information check out Ravenshoe or https://www.npsr.qld.gov.au/parks/tully-falls/about.html.

(c) White Water Rafting
The Tully Gorge is best known as a site for white water rafting (Grade 3 & 4 rapids). The kayaking opportunities are excellent but some of the rapids are very dangerous and thus it can only be recommended for those with a high level of technical skill or beginners under the close supervision of others who are highly experienced. Paddling in a group is essential and it is mandatory to paddle with helmets, throw bags, lifejackets and first-aid equipment. Those wishing to watch the rafters can find a vantage point over the river at Cardstone Weir (between 1 pm and 1.30 pm is the best time each day) which is 46.2 km from Tully and near the end of the road. Be sure to stay on the boardwalk as the rocks are slippery and the currents dangerous. Most of the organised White Water Rafting is based in Cairns. Check out Google for more inforrmation. Also check http://www.visitcairns.com.au/store/Product.aspx?ProductID=0666436e-d366-4ea7-bc42-4e59eea5bfad&gclid=CIbt5c2g_dICFREDvAodSWkBuQ.

Murray Falls
Located 36 km south of Tully  (16 km south on the Bruce Highway turn at Murrigal and drive 20 km to the falls), the Murray Falls are considered some of the prettiest in North Queensland. They are characterised by water-sculptured rocks and clear pools which are ideal for swimming. From the campsite there is a 300 m boardwalk through rainforest to the falls. There is also a 1.8 km return walk to a lookout over the falls which has interesting signage on the life and culture of the traditional Girramay Aboriginal people.

* Prior to the arrival of Europeans the area around Tully was home to the Djirbalngan and Girramay Aboriginal people.

* The Tully area was first settled by Europeans in the early 1870s when James Tyson and Isaac Henry tried to grow sugar and then changed to raising cattle.

* In 1872 the river running through the area was named after William Alcock Tully.

* By 1905 the area had become known for banana growing much of which was done by Chinese vegetable growers who had moved from the goldfields.

* A government report in 1911 declared the area around Tully ideal for sugar cane growing.

* By 1923 the government had started surveying the site for the town and building a sugar mill.

* In 1924 land was subdivided and freehold farms were sold. A local school was opened that year.

* The local mill was completed in 1925 the same year that the town was formally gazetted. At the time it was the largest sugar mill in Australia.

* By 1927 the population of the district was estimated at 1,000. That year saw the construction of a local Roman Catholic Church to cater from the district's large Italian population.

* In 1931 the government-owned sugar mill was sold to a cooperative of local canegrowers.

* In 1933 a local canegrowers' association was created. That year the town's population reached 2,700.

* In 1950 a hydro scheme involving the Tully River was started.

* By 2000 there was nearly 240 km of narrow rail lines connecting sugar farms to the sugar mill.

* In 2006 Cyclone Larry hit the district destroying most of the banana crop.

* In 2011 Cyclone Yasi, with winds of 290 km/hr, decimated the town destroying 75% of the banana crop and half the sugar cane. A third of the houses in the town were also destroyed.

There is a very useful local website. Check out http://www.tullychamber.com.au. 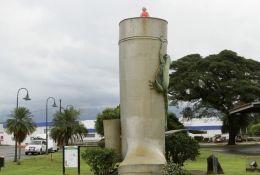 Once called "The Golden Gumboot" by 2017 the rain had conspired to turn it grey ... and in need of a golden paint. 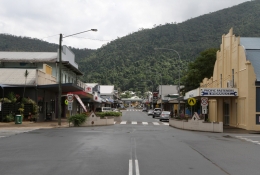 The main street of Tully 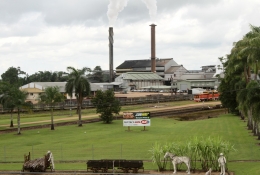 View of the sugar mill from the lookout at the top of the Big Gumboot. 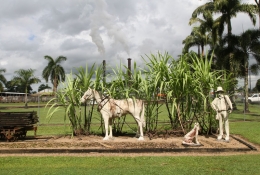 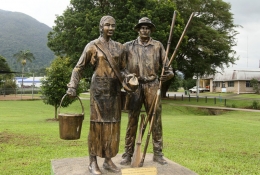 Italian immigrants depicted in the Hearts Full of Hope sculpture near the Big Gumboot.