Quiet, charming rural town on the southern slopes of the Snowy Mountains.

Tumbarumba is a small, attractive town nestled on the southern slopes of the Snowy Mountains. Historically it has always been a sleepy little town having been by-passed by both the Hume Highway and the major railway line between Sydney and Melbourne.  Consequently it has a kind of "held in aspic" old-style charm with a number of beautifully preserved old buildings. Today the town is sustained by the timber, blueberries, raspberries, truffles, olives, sheep and cattle.

Tumbarumba is located 471 km south-west of Sydney via the Hume Freeway and Motorway, 701 metres above sea level, and 473 km north-east of Melbourne.

Tumbarumba is in Ngarigo country and the word reputedly means "sounding ground". There is a suggestion that there are places in the district where, if the ground is hit with a stick, there is a distinct and unusual hollow sound. There is an alternative explanation that it is a corruption of the Ngarigo "dhamba dhamba" meaning "soft" or "soft ground" and a local Ngarigo Elder (see Comments) has explained that the term actually means "place of large trees".

The Court House
The only building in town of real interest is the Court House which is located in Bridge Street. It was constructed in the 1880s and has a certain gracious elegance and charm.

Tumbarumba-Rosewood Rail Trail
This 21 km trail claims to be the first rail trail in New South Wales. It was opened in 2020. The excellent website (see https://www.railtrails.org.au/trails/tumbarumba-to-rosewood-riverina-highlands-rail-trail) explains that it is:
* NSW’s first true rail trail on a government rail corridor passes through beautiful subalpine countryside and farmland.
* The trail is sealed and family friendly, suitable for most types of bicycles, scooters, mobility scooters and prams.
* Interpretative signs along the trail explain the history of the rail line and the region.
There is a detailed review of the experience at https://www.traveller.com.au/the-tumbarumba-to-rosewood-rail-trail-review-nsw-states-first-rail-trail-is-a-gentle-ride-h20vsw which explains that it "is itself a ride of gentle inclines and declines – the tame gradients that are one of the universal pleasures of rail trails." The starting point is at the old Tumbarumba Railway Station in Figures Street.

Hume and Hovell Walking Track - Henry Angel Trackhead
The Hume and Hovell Walking Track stretches for 440 km from Yass to Albury and traces the route taken by Hamilton Hume and William Hovell on their epic exploration in 1824 which led to the establishment of an overland route between Sydney and the present-day site of Melbourne.
The section of the track which runs from Henry Angel Trackhead to Tumbarumba Creek is a pleasant (easy to moderate grading) walk from the Henry Angel Campsite 7 km south of Tumbarumba on the Tumbarumba-Tooma road. It is a 12 km walk which should take about 5-6 hours. The walk is along the Burra Creek and includes a tunnel built during the gold mining days, a number of waterfalls, and the place where Hume and Hovell first sighted the Snowy Mountains. The track is named after Henry Angel, one of the six assigned convicts to accompany Hume and Hovell. Check out https://www.humeandhovelltrack.com.au/#hume-and-hovell-track.

* Prior to the arrival of Europeans the area around Tumbarumba had been Ngarigo country for at least 20,000 years.

* The first Europeans into the area were the explorers Hamilton Hume and William Hovell who passed through in 1824 on their way overland from Yass to Port Phillip.

* The first settler in the tiny settlement arrived in the early 1840s.

* On 24 July 1864 the bushranger 'Mad Dog' Morgan shot and killed Sergeant David Maginnity on the road between Tumbarumba and Coppabella. Morgan approached two policemen and shot Maginnity. The other, Trooper Churchley, fled and was later dismissed for cowardice. After the killing the government put a reward of £1000 on Morgan's head.

* The Tumbarumba goldfields were still productive in the 1930s.

* Today the town is a service centre for the surrounding district where vineyards, blueberries and timber are the dominant agriculture. 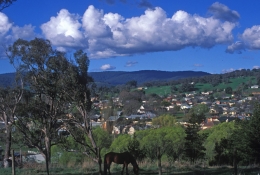 View across the town with the Snowy Mountains rising in the background. 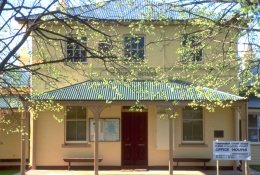 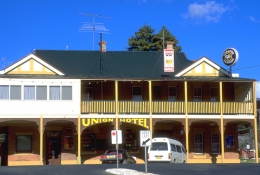 The Union Hotel on The Parade in the heart of Tumbarumba. 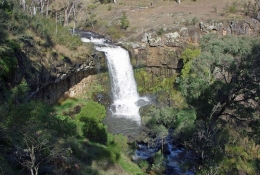 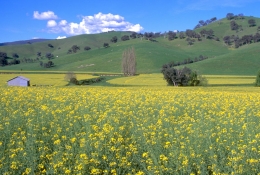 Fields of canola and the rolling foothills of the Snowy Mountains.