Sleepy holiday and retirement coastal town between Moruya and Narooma on the South Coast.

There is no need to make excuses for Tuross Head. It is quiet, sleepy, idyllic and its sole appeal is to those who are thinking of retirement in paradise or a holiday beside the sea where fishing, swimming, kayaking and just lazing around are all you want to do. The town is, by any definition, very new. It was owned as a single property until 1960 when it was subdivided into 1,600 building blocks. Surprisingly it has a couple of excellent cafes and restaurants.

Tuross Head is located 324 km south of Sydney via the Princes Highway. It lies off the main highway between Moruya and Narooma.

The name comes from the Tuross River but there seems to be no evidence as to who named the river or why it was named Tuross. It is also not known why the town does not take the plural form "Tuross Heads".

Kayaking on the Lakes
Both Coila and Tuross Lake are ideal for kayaking. It is possible to circumnavigate Coila Lake with the total distance being 18.5 km. It is equally possible to circumnavigate Tuross Lake which is a 25 km round trip. Both lakes are surrounded by casuarinas and are home to diverse birds and fauna including pelicans, cormorants, falcons, sea eagles, ducks, kingfishers, herons, black swans, little terns, emus and kangaroos can sometimes be seen swimming in the quiet waters. Check out http://www.turosshead.org/Pages/Kayaking%20in%20Turosss.htm for more details.

Beach Walks
There are numerous scenic walks around the lakes and along the beaches. The Tuross Head Walking site (http://www.turosshead.org/Pages/TurossWalking.htm) includes the Plantation Point Walk (a short 15 minute walk to One Tree Point) and the Bingi Dreaming Track.

Tuross Head Walking provides a map and guide to the 5.5 km path that hugs the shore of Coila Lake and finishes at the Tuross Boatramp on Tuross Lake. It is a walk that will take around 90 minutes and includes:
1. One Tree Point - the village founder, Hector McWilliam grew all the Norfolk Pines in Tuross Head from the seeds of a single tree which still stands at Tuross House in Coral Crescent. The tree at One Tree Point stood for sixty years until it was killed in the 1990s. A new tree was planted in 1994. It is an excellent place to look for whales and dolphins. It provides a fine view down the coast to Potato Point which can be seen clearly on the next major headland. There is also interesting signage about the local Aborigines who lived in the area before the arrival of Europeans.
2. Heading north along the beach there is Plantation Point and the Memorial Gardens.
3. McWilliam Park is the location where a whale which was washed ashore in 1980 is buried.
4. Coila Beach and Lake - this is a pleasant lake to walk around. The lake is 48 square kilometres and shallow. It is nowhere deeper than 3 metres. The southern beginning to the Bingi Dreaming Track is located at the south-eastern corner of the lake.
9. The Eva Mylott Monument is located at Tuross House. See the story about Mel Gibson (below). She was Mel Gibson's grandmother and her father's decision to sell his land at Tuross Head helped to create the modern town.

Tuross Head Scenic Drive is a drive around Tuross Head which starts at Coila Beach, heads to Plantation Point and One Tree Point and then follows the southern shoreline to look across the Tuross River and around to Lavender Bay and the Tuross boatsheds.

Bingi Dreaming Track
Located at Congo, 17 km to the north, the Bingi Dreaming Track follows part of a Dreaming track used by the Yuin people and continues down the coast to Tuross Head. The Bingi Dreaming Track passes shell middens, stone quarries, knapping sites (stone tool making), campsites and fresh water sources. There are also beacon sites for sending smoke signals and lookouts traditionally used to spot visitors and schools of fish. The Congo area was a major source of silcrete, used to make stone tools. Silcrete was widely traded throughout the region. The walk follows the beaches and headlands of the Eurobodalla National Park from Congo to Bingie Bingie Point and is 8 km one way. It takes around 3 hours to walk. A detailed description of the track, complete with an excellent map, is available at https://docs.google.com/file/d/0B-RJggU7FnP5ZEE0M0d5VXFaTnc/edit?pli=1.

A Postscript: What do Tuross Head and Mel Gibson have in Common?
It had always intrigued me how an American like the actor and part-time racist, Mel Colm-Cille Gerard Gibson, washed up in Australia. Let’s face it Ol’ Mel really is very American – and they can keep him.
Well the Gibson-Australia connection goes back to Tuross Head because Mel’s paternal great-grandfather, Patrick Mylott, owned the whole bloody town. Well, not actually the town because it was just a gorgeous piece of unspoilt coastline at the time … but he did own the 875 acres upon which the town was subsequently built.
Mel’s great-grandfather, in an act of extraordinary familial devotion, leased his property at Tuross Head and headed to Sydney with his daughter, Eva Mylott, who was a musical prodigy. Patrick believed she would grow into a gifted and famous opera singer.
Eva did become a famous contralto. She became a protégé of Dame Nellie Melba, travelled to both England and the US, and in 1917 she married an American businessman, John Hutton Gibson, in New York. One of her sons, Hutton Gibson, was Mel’s father.
So it is hardly surprising that the Gibsons saw Australia as a possible home and that young Mel not only trained at NIDA (the National Institute of Dramatic Art in Sydney - home of many of the country’s best actors) and that he got his first big movie break rolling around the desert out at Silverton as the crazed Mad Max.
We can only wonder whether he ever visited Tuross Head and said “My Grandma was born here. This could all have been mine if great-granddad hadn’t taken her to Sydney?”

* It has been estimated that the Brinja people of the Yuin Aboriginal language group were living around Tuross Head for at least 7,000 years prior to European settlement. They lived mainly on fish and crustaceans and kept warm in the winter months with possum skin coats. It is estimated there were around 1,500 people in the district pre-1788.

* The first Europeans to pass through the area were the survivors from the wreck of the Sydney Cove who reached the area in April 1797.  Nine of them died in the Batemans Bay area. Only three reached Sydney alive.

* In 1847 the local Yuin people were rounded up and placed in a reserve at Turlinjah.

* In the 1870s Patrick Mylott built Tuross House. At the time he owned 875 acres and was the sole owner of the headland. He established a fleet of ships which traded by entering the Tuross River at Tuross Head.

* In 1883 Patrick leased his property so he could take his daughter, Eva Mylott (who was born at Tuross Head), to Sydney to further her singing career. Eva Mylott was the grandmother of Mel Gibson.

* In 1924 Hector McWilliam, a real estate salesman, purchased the land from the Mylott family. The town now refers to this sale with its proud declaration "Perfect holidays since 1924". The 200 Norfolk pines in the town were planted by Hector McWilliam who was told they would not grow in the area. He immediately opened the land up for private sale with a plan to subdivide it into 800 blocks and to build a "magnificent boulevard which will front five beaches and the two lakes". Although his brochures claimed it was "Canberra's best seaside resort" the subdivision was not successful.

* By 1960 the original Mylott property had been broken up into 1,600 housing blocks. Most of the development of the town occurs after this subdivision.

* In 1994 a new "one tree" Norfolk Pine was planted on One Tree Point after the previous one was destroyed by vandals.

There is no Visitor Information Centre at Tuross Head. The closest is the Narooma Visitors Centre, Princes Highway, Narooma, tel: (02) 4476 2881.

There is an excellent webpage - http://www.turosshead.org/Pages/EatingOut.htm - which provides information on the restaurants and cafes in the town. The two highlights are the Pickled Octopus Seafood Cafe and the Tuross Boatshed and Cafe. Many of the cafes close in the winter months.

There is an excellent local website with a downloadable Visitor Information Guide. Check out http://www.turosshead.org for details. 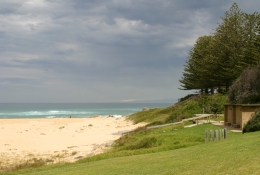 Looking south from the main beach at Tuross Head 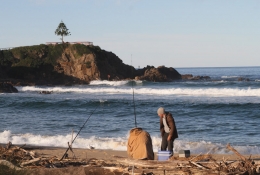 Fishermen in the late afternoon with One Tree Point above them. 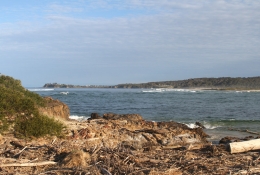 View across the mouth of the Tuross River towards Potato Point. 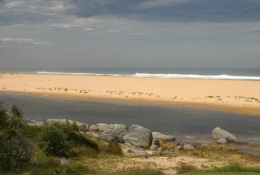 Where Coila Lake reaches the beach at Tuross Head. 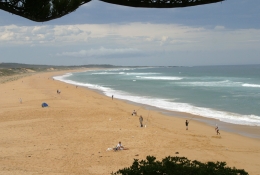 Looking north along the main beach at Tuross Head. 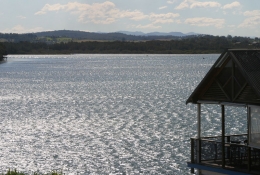 Tuross Lake from above the Pickled Octopus Seafood Cafe 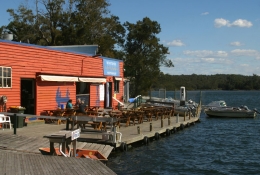