Ulverstone is an attractive destination at the mouth of the Leven River. It is a substantial town by Tasmanian standards (the district has a population over 12,000) and consequently the town can boast good accommodation and interesting restaurants and cafes. Historically it is a service town between the ports of Burnie and Devonport. Its primary appeal is as a holiday destination and as a base to explore the coast and hinterland.

Ulverstone is located at the mouth of the Leven River 20 km west of Devonport, 118 km north-west of Launceston and 298 km north of Hobart.

Ulverstone Local History Museum
Located at 50 Main Street and open daily from 1.30 pm - 4.30 pm this is an unusual local museum. Not only does it have manuscripts and artefacts but its piece de resistance is an unusual collection of business facades including a blacksmith and wheelwright (Levi Titmus), a photographer (GP Taylor) and a bootmaker (A Wood). tel (03) 6425 3835 or http://www.ulvmuseum.org.

James Fenton's House
James Fenton is recognised as the first European settler in the area. His first house, which was located about 100 metres on the Ulverstone side of the Forth Bridge, is remembered by a cairn which marks the site. When he retired Fenton wrote a History of Tasmania.

Leven River Cruises
One of the most popular activities is to take a cruise up the Leven River. The cruise gives participants an opportunity to explore the bushwalks in Leven Park and to spot the platypus as well as the sea eagles and kingfishers which are common in the area. 7 km upriver is a fauna sanctuary. The trip is restricted to 16 people. Contact tel: (03) 6425 2839 or 0400 130 258 or check out http://www.discovertheleven.com. Cruises depart from the public pontoon on Tasma Parade.

The Shrine of Remembrance
Driving in to Ulverstone it is impossible to miss the Shrine of Remembrance with its statues and its strange clocktower. It was designed and built by immigrants from Europe in 1953 and is a memorial for returned service personnel with each of the columns representing the three military services - Army, Navy and Air Force. Nearby is the Tasmanian Light Horse Memorial.

Furners Hotel
The standout building in Reibey Street is Furners Hotel, a particularly attractive and dominant Federation hotel which dates from 1903.

Riverside Anzac Park
Anzac Park is located upsteam on the eastern side of  the Leven River. It has a number of unusual attractions including a fountain which has been programmed to offer a variety of different patterns; an excellent 'Space age' children's playground with rockets and space ships; and a pine tree planted from a seed which was taken from Lone Pine ridge at Gallipoli.

Three Sisters - Goat Island Nature Reserve
The Department of Environment explains on its website (http://www.environment.gov.au/cgi-bin/ahdb/search.pl?mode=place_detail;place_id=12106) that "Three Sisters - Goat Island Nature Reserve is significant as a breeding area for Fairy Penguins. The Nature Reserve contains the only known exposed contact between metamorphosed and unmetamorphosed Precambrian rocks in Tasmania, and is therefore highly significant in the evolution of the Tasmanian landscape. Part of this feature is a Precambrian stretched pebble conglomerate, an unusual rock type. The place is of outstanding value as a teaching and research site. The Nature Reserve is a rocky off-shore island and foreshore composed of Precambrian rocks including a stretched pebble conglomerate. The vegetation of the area includes a mixture of salt tolerant coastal species, reeds and grasses. It is possible that cultural values, both indigenous and non-indigenous, of national estate significance may exist in this place. As yet, the AHC has not identified, documented or assessed these values." The local Visitor Guide points out that it is accessible at low tide - but take care not to get stranded.

Braddons Lookout
Located on the Upper Forth Road, Braddons Lookout (named after a prominent local politician) offers excellent views over both the coast and the hinterland. Reputedly on a clear day it is possible to see south to Cradle Mountain.

Westella and Lonah
On the eastern side of town is Westella, a beautiful old gabled house which was built in 1885. Westella is an excellent example of the kind of elegant house with attractive gardens which was built in Northern Tasmania in the 1880s due to the availability of fine timber. It has been turned into an attractive 4-star bed and breakfast. Check it out at http://www.westella.com.

Gunns Plains Caves
Located 30 km from Ulverstone, Gunns Plains Caves were discovered in 1906 and proclaimed a State Reserve in 1918.  The website explains: "Upon entry a steep flight of 54 concrete steps are descended and from this point the pathway is fairly level apart from a short ladder to be climbed down. The tour route through the caves is 275 metres long." There are regular hourly tours at 10.00 am, 11.00 am, noon, 1.30 am, 2.30 am and 3.30 am. It is claimed that the caves were discovered when a possum fell down the cave entrance. The caves maintain a regular 11°C all year round. The journey to the caves passes through some particularly beautiful scenery. There are good picnic facilities nearby. Check out http://www.gunnsplainscaves.com.au, tel: (03) 6429 1388.

Leven Canyon
Located 42 km from Ulverstone (a 45 minute drive), Leven Canyon has four interesting and pleasant bushwalks, good picnic and barbecue facilities and views down the 250 metre Leven Canyon. There is an excellent downloadable brochure - http://www.centralcoast.tas.gov.au/webdata/resources/files/leven_brochure_web_spread.pdf - which has good maps of the Cruikshanks Lookout Walk, the Edge Lookout Walk and the Canyon Floor Walk, a challenging one hour walk to the Canyon Floor and across the Leven River footbridge. The walks range from 15 minutes return (Preston Falls) to 6-7 hours (Black Bluff).

* Prior to the arrival of Europeans the area was settled by people from the Tommeginne Aboriginal language group.

* In 1840 James Fenton became the first European settler in the area. He attempted to farm marshy land to the west of the Forth River but the soil was saline and substandard. He remained in the area until 1879.

* In 1848 Andrew Risby settled on The Rises at the south-eastern end of modern Ulverstone. Risby had arrived in the area in 1841 but had been forced out by land speculators.

* By the 1850s timber workers were in the area. They made their fortunes shipping timber palings to the goldfields in Victoria.

* A post office was opened in 1857 and named Leven. At this time the settlement was known as The Leven although Ulverstone was being used as early as 1854.

* The town only had 15 inhabitants in 1861. It was officially declared Ulverstone that year.

* The arrival of the railway in 1890 gave the town the boost it required. It is now recognised as a major tourist and service centre.

* In 1915 a branch rail line to Nietta was opened. It carried timber to the mill in Burnie.

* In 2012 the shoreline was redeveloped as the Wharf Precinct.

The local region is called "Coast to Canyon" and the official website is http://www.centralcoast.tas.gov.au/page.aspx?u=182 which has useful information on places to stay and things to do. 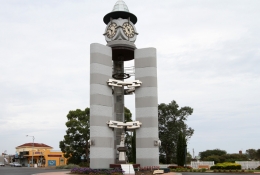 The Shrine of Remembrance clocktower (1953) is a distinctive landmark. 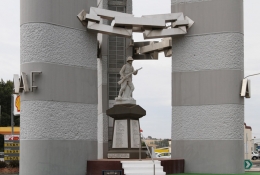 Detail of the Shrine of Remembrance. 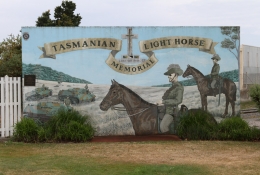 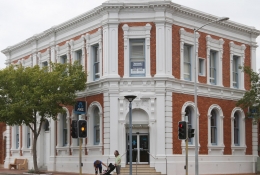 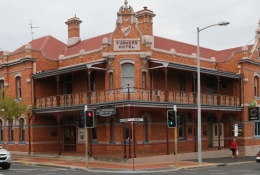 The shop facades at the Ulverstone Local History Museum. 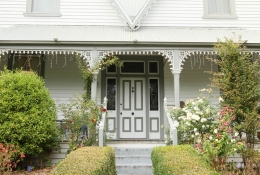 The gabled Westella (1885) now a B&B on the road into Ulverstone.