Vast lava tubes in the outback wilderness of Gulf Savannah

One of the wonders of Australia, the Undara Lava Tubes are reputedly the largest lava tubes in the world. Located in savannah grassland south-west of Cairns, they can be inspected only by taking conducted tours which are organised by an eco-tourism organisation known as the Undara Experience. The tour offers a unique insight into the flora and fauna of the Australian tropics as well as accompanying visitors into the caves formed by the Lava Tubes.

The Undara Lava Tubes are located 264 km south-west of Cairns, 485 km from Townsville and 1,738 km north-west of Brisbane via Roma on the Warrego and Carnarvon Highways.

It is accepted that "undara" is a local Aboriginal word meaning "long way".

The Geology of the Undara Lava Tubes
Geologists estimate that the lava tubes were formed 190,000 years ago. The lava flow covered 1550 square kilometres of north Queensland. At the time the whole region was dotted with active volcanoes. It has been estimated that there were 164 volcanoes, vents and cones in the larger McBride Volcanic Province of which Undara is part. Seemingly nonstop eruptions produced the Atherton Tablelands which lie to the north. The volcanoes were responsible for the rich, deep soils which make the Atherton Tablelands so agriculturally productive.
The Undara Lava Tubes were formed when 23 cubic kilometres of lava from one of the many volcanoes spilled out over the land and travelled along a river bed. The tubes were formed when the outer layer formed a crust which protected the still-molten lava which continued to flow as though it was in a tube or a pipe. Geologists believe that the entire length of 160 km is the longest lava flow from any single volcano on earth. It is estimated that the whole process took between 2-3 weeks with the lava flowing at a rate of around 500 metres per hour. Parts of the lava flow, notably a section known as "The Wall", which is near the township of Mount Surprise, have been compared to the lunar ridges on the moon.
There are two specific branches which form the Undara Lava Tubes - one runs for 16 km and the other for possibly as much as 28 km. Over time the tubes have collapsed at various points. These collapses have left huge dents in the landscape which can be seen from the air. They look like dark depressions because they have become heavily vegetated. They are best seen from the helicopter flights which leave the Undara lodge.
At various points these depressions have formed caves. These are where the tour guides enter the tubes. The caves are vast with maximum widths of 21.2 metres and heights of up to 10 metres. They are never dark because they have gaping holes at the surface and, unlike limestone caves, they are nothing more than huge caverns. They tend to be relatively straight and only terminate where the roof has caved in.

Tours of the Lava Tubes
The Undara Tubes are open to the public but they can only be explored by joining one of the organised tours which leaves from the Lodge. There are three tours available: The Archway Explorer (2 hours, easy fitness, boardwalks) starts at the Lava Lodge Reception at 10.30 am and sometimes goes at 8.00 am, 1.00 pm and 3.30 pm depending on demand. The Active Explorer (2 hours, moderate fitness, uneven surfaces) starts at the Lava Lodge Reception at 8.30 am, 10.30 am, 1.00 pm and 3.00 pm. And the Wildlife at Sunset Tour, which leaves from the Lava Lodge Reception between 5.00 pm and 6.00 pm, and which is an easy fitness level, lasts around two hours, passes across boardwalks, steps and involves a little uneven climbing. The great attraction of the Sunset Tour is, as the website explains: "Thousands of tiny insect eating micro-bats emerge from the darkness to find food which attracts Pythons and Brown Tree Snakes that hang from the trees and strike out at the bats to capture a meal. This once in a life time nature experience runs all year but is at its spectacular best in the Summer Green Season!"
The tours travel through the bush past the Hundred Mile Swamp until they reach a rocky outcrop. Visitors climb to the top of the outcrop where they can see the stump remnants of the volcanoes that produced the lava flows. The guide (they are members of the non-profit Savannah Guides organisation) gives a detailed description of how the Lava Tubes were formed and points out the main features of the area. There are also warnings about the number of snakes [they don't emphasise this but they insist everyone wears enclosed footwear and it is known that the region is the habitat for, amongst others, the taipan, northern death adder, king brown and a range of pythons and tree snakes] in the area and interesting comments about both the flora and fauna.
The tour then moves on to the lava caves. It is an easy walk to the base of the cave and, once again, the guide explains the fauna of the cave as well as explaining the geological features. In the late afternoon the animals come out and it is common to see kangaroos grazing beside the road and rock wallabies sitting quietly in the bush at the entrance to the caves.
The tubes are vast and access is remarkably easy. It is never anything more than a walk down a stable scree slope into the tube. The area around the tubes is typical scrubby savannah bush country with pandanus, ironbarks, white-barked gums and cabbage gums mixed with remnant rainforest - known as semi-evergreen vine thicket – which occurs in the mouths of the caves. As the National Parks website explains: "Semi-evergreen vine thicket grows in the moist, sheltered entrances to some of the lava caves. The roofs of some tubes collapsed, creating ideal conditions for dry rainforest to grow and wildlife to shelter. Rock-wallabies, insectivorous bat colonies and owls roost here in the cool. Birds shelter in the fruit-filled canopy and predators lurk in the tumbled basalt terrain to complete the food chain."
Not surprisingly the caves are home to a wide variety of Australian wildlife. There are spiders and colonies of the eastern horseshoe bat. The guides are highly qualified and their talks are genuinely informative and interesting.
It is absolutely essential to book a trip before travelling to the Undara Lava Tubes. It is common to see people who have speculatively driven 275 km from Cairns being turned away because a tour is full. And when a tour is full there is really no possible flexibility.
Some visitors prefer to make their own way and do their own exploring. At Undara this is really only possible in a very limited sense. There are a total of eight walking tracks around the Lodge ranging from 1.5 km to 12 km. Not surprisingly they range from easy to moderate-steep. They are difficult in the summer months because of the heat and they are mostly about walking from one lookout to the next and enjoying the views over the lava plains. There is a walk to the top of Kalkani Crater and one around the edges of the 100 Mile Swamp – which, not surprisingly, is not very swampy in the dry season. There is a detailed list of all the walks, complete with a map and descriptions of the walks at http://undara.com.au/activities/bush-walking. The logic of only providing organised tours is a model of eco-tourism. A bus with twenty people is much better than dozens of 4WD vehicles damaging this very delicate ecosystem.

Rosella Plains Lookout Trail
The National Parks website offers a seductive description of the 12 km walk which makes it enticing if the weather is good. "Walking clockwise from Undara Experience, the first 3 km of this trail follows a section of the old telegraph line from Cardwell to Normanton. Original telegraph poles and a replica of a settler’s hut can be seen. Information signs along the way introduce the lifestyle of 19th century pioneers in the area. From the hut, the trail continues in a south westerly direction along the lowlands before the short, steep “Cardiac Climb” to Jump Up lookout. The trail then winds through beautiful granite country with volcanic vistas. Look for the red-flowering native rosella bushes (Hibiscus heterophyllus), bright yellow flowers of the kapok tree (Cochlospermum gillivraei), and the distinctive, spreading crown of dark green rounded leaves, belonging to the Cooktown ironwood (Erythrophleum chlorostachys). The most westerly point of this walk is Rosella Plains lookout with fantastic views of the province. From the lookout, walkers can return the way they came, or continue for another 6 km to complete the loop, via the Atkinsons lookout trail, to Undara Experience. Signs along the track introduce natural and cultural values of the area, including the geology of the landscape, a variety of plants and animals, and the way-of-life of the area’s Traditional Owners. This track is steep and rocky in some places and walking boots and gaiters are recommended." Check out http://www.nprsr.qld.gov.au/parks/undara-volcanic/about.html for more details.

The Savannahlander
The Savannahlander train - a classic 1960s "silver bullet" rail motor - travels the original 90 year old rail line that serviced the pioneering mining towns of Forsayth, Einasleigh and Mount Surprise and offers four day tour packages which include tours of Undara and Cobbold Gorge. Check out http://www.savannahlander.com.au/tour-home/savannahlander-tours/ for details.

Cobbold Gorge
Located 145 km west of Undara is Georgetown (check http://www.cobboldgorge.com.au/about/the-gorge.html and watch the video) and 57 km beyond Georgetown is Cobbold Gorge. It can only be visited by guided tour from Cobbold Gorge Village. The sandstone gorge, claimed to be the youngest in Queensland, was created over the past 135 million years and modified significantly as recently as 10,000 years ago. The narrow ravines (some as narrow as two metres) have carved out deep gorges and permanent waterholes below towering cliffs which, in some places are 30 metres high. The gorge is known for its harmless freshwater crocodiles. There is a detailed account of the accommodation, tours and scenery of the area at http://www.cobboldgorge.com.au.

* Prior to the arrival of Europeans the area had been occupied by the Ewamian Aboriginal people for at least 20,000 years.

* The lava tubes were formed about 190 000 years ago when 23 cubic kilometres of lava from a volcano spilled out over the land and travelled along a river bed.

* The area was settled by Europeans when the Collins family, who own and operate Undara Experience, arrived to graze cattle in 1862.

* Gerry Collins applied to establish an Undara Experience at Rosella Plains Station in 1987.

* The first Undara Experience tour was launched in 1990. 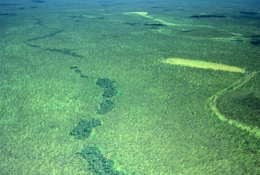 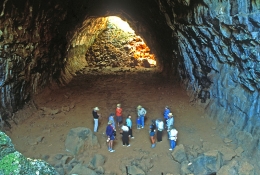 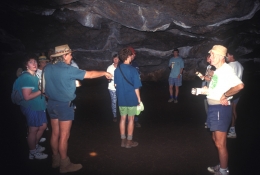 A group inside the Undara Lava Tubes, Mt Surprise (1995) 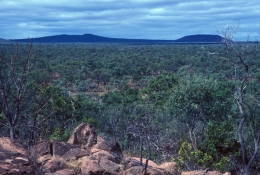 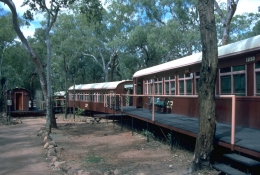