Wheatbelt town known as the 'Home of the Danihers'

Ungarie, on the plains to the north of West Wyalong, is a town known for the unique achievement that four local men - the Daniher Brothers - all took to the field for the Essendon VFL/AFL team in a single game in 1990. It was the first time four brothers had played together in a single match. Although now a small town with many closed shops, Ungarie is also home to the remarkable "Dugout" room where a complete history of the town's involvement in all wars since the Boer War is revealed through photographs and records. Nearby, at the railway siding at Weethalle, is the first example of Silo Art in New South Wales.

Ungarie is located 531 km west of Sydney via Yass and Temora, 507 km via Bathurst and Cowra, and 42 km north-west of West Wyalong.

Ungarie is part of the greater Wiradjuri country which stretches across much of central New South Wales. The name Ungarie is thought to be a Wiradjuri word meaning "thigh".

The Big Football
The Big Football is located in the park in the town's main street next door to the local museum. The sign beside the Big Football explains that "Terry, Neale, Anthony and Chris made VFL/AFL history on Saturday 1 September, 1990 when the four brothers from Ungarie, NSW, took the field for Essendon together in Round 22 of the VFL against St Kilda. This was the first and only time in the illustrious history of the VFL/AFL that four brothers played on the same team in the same game. The four brothers also played together for New South Wales in a state game against Victoria (which they won). Together the four brothers hold the VFL/AFL record for the total number of games played by a generation of brothers appearing in 752 games in total. The sons of Jim and Edna Daniher, the boys are four of eleven siblings who were proudly raised in Ungarie where the Daniher legend remains to this day." The five metre football, weighing almost a tonne and sometimes known as "The Big Sherrin" [the brand of Aussie Rules footballs], is a monument to this remarkable family of footballers.

The Dugout
Two rooms located in the local Memorial Hall record the town's war history. The rooms were opened in 2018 after four years of hard work had recorded every man and woman who had lived in the district and gone off to war. On the walls of “The Dugout” are photos of the locals who went off to the Boer War, the Great War, World War II, the Korean War, did National Service and fought in Vietnam. There are also records of each of the soldiers although many of the soldier settlers who came to the district to farm the local land left no record of themselves or their service. To gain access to the room contact the West Wyalong Visitor Centre, tel: (02) 6972 2266.

Henderson Brothers Mural
Located on Wollongough Street, the Henderson Brothers car sales rooms were empty and derelict until the artist, Simon White, was commissioned to paint a mural (more a Trompe-l'œil) on the front corrugated doors. It depicts the old 1950s car sales room. At the time White commented: " Yesterday I finished painting the first stage of this historical building in Ungarie, NSW. This mural was designed to pay homage to the Henderson Bros, who achieved many great things for the town during WW2 and later. This included selling cars, and building an engine to bring power to the town. My brief was to turn this part of the building into a 1950s car showroom."

Silo Art at Weethalle
Located 60 km south-west of Ungarie is the tiny town of Weethalle which has the distinction of being the first set of grain silos to be painted in New South Wales. The silos feature a classic wheat and sheep image of a shearer on one silo; a field of wheat and a wheat silo on the second one; and a farmer checking his wheat on the third. It was completed, at a cost of $20,000 (the paint was donated), by artist Heesco Khosnaran in 2017.

Lake Cowal
Located 50 km to the east of Ungarie, Lake Cowal, which is fed by the Bland, Barmedman, Duck and Back Creeks, is the largest natural lake in New South Wales covering 23,300 ha and being about 25 km in length and 9 km across. The lake, which is shallow and can dry up during droughts, is an important waterfowl breeding ground. Bird lovers have identified 172 species around the lake.

* The district was originally inhabited by the Wiradjuri people whose lands spread across much of central New South Wales.

* The explorer John Oxley was the first European in the area. He travelled through in 1817 and, somewhat infamously, is credited with observing that "from want of timber, grass and water, it will never be inhabited by civilised man".

* In 1827 the colony's Surveyor-General, Thomas Mitchell, travelled through the region and painted a much more positive picture of its agricultural potential.

* By 1833 squatters were settling the district.

* In 1866 Roger Freeling took up land which he called Ungarie Station.

* In 1872 a post master was employed to provide postal services to the district.

* By 1892 Ungarie had a blacksmith, a butcher, two general stores, a post office and a hotel.

* In 1893 the village was surveyed by Surveyor A. Maitland.

* In 1917 the railway line from West Wyalong opened.

* In 1990 the four Daniher brothers took to the AFL field for Essendon. 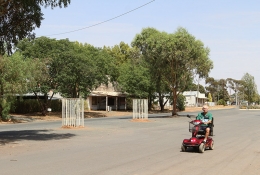 The main street of Ungarie 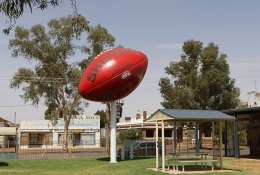 The Big Football at Ungarie 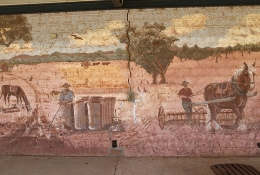 The mural on the wall of the Ungarie Museum 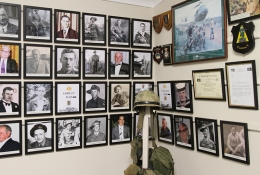 A wall in the Dugout in the Memorial Hall 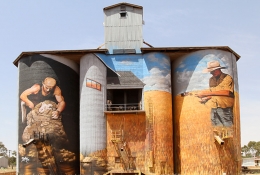 The silo art at Weethalle