Small service town in the heart of the Riverina.

Urana is a small service centre in the Riverina between Lockhart and Jerilderie. While it appears to be a sleepy little settlement designed to meet the needs of the surrounding wool and wheat graziers it actually has some real treasures: a huge Soldiers Memorial Hall which is probably the largest in Australia; a fascinating Court House preserved from the late 19th century; and some decidedly eccentric vernacular sculptures.

Urana is located 566 km south-west of Sydney via the Hume and Sturt Highways and Wagga Wagga. It is 379 km north of Melbourne via Wangaratta.

It is likely that Urana comes from a Wiradjuri word "airana" used to describe a temporary shelter made from bushes, branches and grasses.

Urana Court House Museum
Located at 13 William Street, the museum is open by appointment. It is open on Mondays and Tuesdays with hours varying. Tel: (02) 6930 9100 for opening details. The museum still contains the court's original furnishings and Coat of Arms which dates from the 1880s. There is also displays of local memorabilia. The current Court House in Urana, an impressive brick building with Roman-arched windows, was designed by James Barnet, the Colonial Architect and  completed in 1880 at a cost £1,867/17/-. It has separate rooms for the judge and the jury and was described as being fit for a city. Today's Court House is not the same as the court presided over by Henry Baylis. However Baylis continued as a Police Magistrate in the district until 1896 so he did preside over cases in the current Court House. The building is currently on the Register of the National Trust. Most of the court furniture remains, including lovely cedar tables, cupboards and public benches. There is also a charge book from the 1860s where Henry Baylis' signature appears regularly.

The Big Spider
If you are an arachnaphobe you probably won't make the journey to the local water tower where, Andrew Whitehead, a council worker and budding artist, has fashioned a huge black spider out of bits of old piping and tubing. It does not carry the suggestion that the town is full of spiders. Rather it acknowledges the local Urana football team which, until the 1980s, were known as The Spiders. Reported in the Border Mail the establishment of the sculpture involved: "Mr Whitehead, who is afraid of heights, installed the artwork himself, climbing a 16m ladder then walking around the 30cm rim of the tower carrying an 8kg bracket and 8m of cable ... Once the bracket and cable were in place a cherry picker raised the spider into position and it was secured with the three cables."

Soldiers Memorial Hall
This striking building, thought to be the largest Soldiers Memorial Hall in Australia, was built in 1923 to commemorate the soldiers who fought and died in World War I. It is a building out of all proportion to the town. The Albury Banner and Wodonga Express wrote on 2 November, 1923: "There was a large assemblage at Urana to witness the laying of the foundation stone of the Urana Soldiers' Memorial Hall. The building will provide a large dancing hall, stage, dressing-room, supper-room, kitchen, library, reading-room, committee room, sample room, and soldiers' club room. The plans were prepared by the shire engineer, Mr. H. W. Hutchings. Mr. F. E. Whitehead, chairman of the memorial committee, presided and the ceremony of laying the foundation stone was performed by Cr. Otway Falkiner, who was presented with an address of welcome and a silver trowel. Speeches were also made by Lieut.-Colonel Thompson (Daysdale) and Cr. D. D. Culley, president of Urana Shire. Besides £2,500 promised, another £585 was donated at the ceremony. During the afternoon, at the instigation of Mrs. Otway Falkiner, a branch of the Country Women's organisation was formed, and Mr. Falkiner promised to purchase a block of land and erect thereon a small cottage, to assist the aim of the organisation. Mrs. Falkiner was elected president of the branch, and other office-bearers were also appointed. The Diggers held a ball at night, which was most successful."

Lake Urana Nature Reserve
Lake Urana Nature Reserve is a salt lake located 10 km west of Urana. It lies on the shore of Lake Urana, an intermittent lake filled by flood flows on average every ten to twenty years. The reserve has an area of 302 ha and was dedicated in 1996. It is home to one of the few remaining stands of yellow box in the Riverina. The reserve is an important area of remnant habitat for native animals of the western slopes and plains, particularly for birds, of which 37 species have been observed including the red-rumped parrot, brown treecreeper, striated pardalote , spiny-cheeked honeyeater , striped honeyeater, grey-crowned babbler and when the lake is flooded, waterbirds such as wood ducks, Pacific black duck, Australian grey teal, yellow-billed spoonbill, black-fronted dotterel and magpie lark. The lake's Aboriginal history dates back 25-30,000 years ago with burials, grinding dishes and ovens being found in the lunette on the eastern side of the lake.

Boree Creek
Some years ago the tiny township of Boree Creek gained prominence as the home town of Federal National Party leader and Deputy Prime Minister, Tim Fischer. Today this tiny town's main claim to fame is that the very prolific Scrap Art sculptor, Andrew Whitehead, has made a scrap Swaggie which is worth a visit.

Morundah Horse Sculpture
Local sculptor, Andrew Whitehead (who is responsible for the Big Spider in Urana) has also sculpted Toolbox and Jockey which, as he explained  is "a scrap metal sculpture commissioned to celebrate 100 years of bush racing. I started with a horse skull, built a wire scale copy then clad it in scrap. The body line and stance were from many net images. The secret of success or failure is the line from the nose to the end of the tail. Look at attached photo You know when it is correct. I made the work in 14 slip-together pieces so that I could weld the insides as well as install it indoors if that was required. There was a lot of difficulty finding the right shape and size scrap parts, but as you can see on the legs if you maintain correct proportion between the parts the size can be a little wrong but it still looks believable. I am very happy with the result." The finished work can be seen at the tiny town of Morundah

* Prior to European occupation the area was home to the Wiradjuri Aboriginal people.

* The town was formally gazetted in 1859. It was the first village in the central Riverina.

* In 1862 the first Court of Petty Sessions was held in Urana.

* On 20 August 1863 when the bushranger, Dan 'Mad Dog' Morgan held up the Wagga Police Magistrate, Henry Baylis, as Baylis was riding from Wagga to Urana to hold court.

* By 1866 the town had both the Urana and the Royal George Hotel.

* In 1881 the Police Barracks and Lockup were built beside the Court House.

* Urana Shire Council was proclaimed in 1906.

* The last court sitting in Urana occurred in 1983.

There is a new site http://www.urana.com.au which is useful and very informative. The North of the Murray website - check out https://www.visitthemurray.com.au/places-to-go/east/corowaregion/places/urana - has lots of useful information. 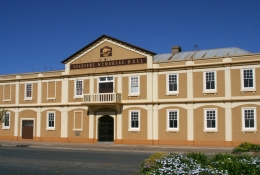 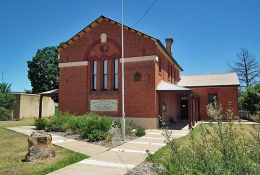 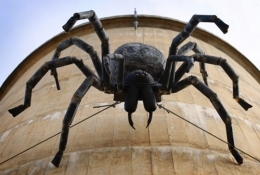 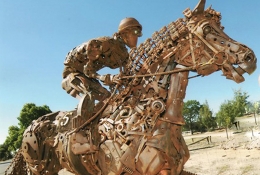