Quiet town near the NSW-Queensland border surrounded by impressive parks and waterfalls.

There is something wonderfully dramatic about a small, sleepy town which has a dark and forbidding mountain hovering above it. Urbenville, which is only 25 km from the Queensland border, is dominated by Crown Mountain, one of the many volcanic plugs in the area. Other plugs are Edinborough Castle and The Beehive.
The appeal of the district lies not in the town but in the geology, fauna and flora in this glorious unspoilt part of far northern New South Wales. The forests around Urbenville have become a popular destination for 4WD enthusiasts and, with this in mind, the National Parks and Wildlife Service have a large board in the main street with details of how to access the major natural sites of interest. People visit Urbenville to enjoy the fishing, to camp along the rivers and streams, to bushwalk, go bird watching and admire the scenery.

Urbenville, which is 366m above sea level, is located 154 km south-west of Brisbane, 25 km south of the NSW-Queensland border, 797 km north of Sydney via the New England Highway and 820 km via the Pacific Highway.

Originally known as Tooloom, this village was renamed Urbenville after William Urben who was the first white child born at the Tooloom gold diggings.

Pioneer Cottage and Historical Museum
The Pioneer Cottage and Historical Museum, located in Urben Street, was originally built in the town of Legume in 1892. It was constructed of hoop pine for the Lamb family and was relocated to its present site in 1977. The building, which has been restored, is characterised by a high-hipped roof, a bullnose veranda and external timber battens. The museum includes historical displays relating to the town, the district and the timber industry. It is open either by appointment or on the first and third Sundays of each month, tel: (02) 6634 1352.

Tooloom Falls
Tooloom Falls are located 6 km south-west of Urbenville. Head out of town on the Legume Road. The falls which are 10 metres high and 60 metres wide are a pleasant place for swimming and ideal for a picnic or barbecue. They were important to the Gidabal and Wurlabal people and were declared a significant Aboriginal Place in 1977. There is a wonderful story about the falls. The word 'Dooloom' means lice in the Gidabal language and it was applied to the falls so that the children would not swim there. The fear of lice were probably a ruse because the Gidabal believed that the falls and the water hole were haunted by dangerous spirits. There is a plaque at the falls which explains the myth. It also tells the story of  Dirrangun the Witch who is also associated with the falls.

Beaury State Forest and Tooloom Lookout
Beyond Tooloom Falls the road to Legume passes another volcanic plug known as The Beehive and about 25 km along the winding road the traveller reaches the Tooloom Rest Area where it is possible to enjoy a 500m walk through the forest. A little further along the road there is a turnoff to Tooloom Lookout which offers both a rainforest walk and a panoramic view across the tablelands towards Tenterfield.

Yabbra State Forest and Bean Creek Falls
One of the highlights of the area is the drive through the Yabbra State Forest which has some of the most beautiful eucalypt scenery, combined with the glorious sounds of bellbirds ringing in the canopy, that you will find anywhere on the north coast. There are rainforest walks sign posted from the road.  A bonus of this drive south to Bonalbo is the clearly sign posted Bean Creek Falls. They are located 700 metres down a dirt track. There is a small parking area near the falls. The falls are known to be a sacred Gidabal place and the viewing platform is located down a short track.

North Yabbra Forest Loop Road
If you head south towards Bonalbo and then turn onto the unsealed Boomi Creek Road you will pass both the Yabbra Flora Reserve and another of the area's volcanic plugs which is named Edinborough Castle. Energetic enthusiasts can climb the 'castle'.

* Before the arrival of European settlers the area around Urbenville had been occupied by both the Gidabal and Wurlabal people of the Bunjalung tribe for tens of thousands of years. It has been suggested that the Tooloom Falls, 6 km south-west of Urbenville, marked the boundary between the groups.

* the township came into existence in the 1860s when a rich alluvial goldfield was discovered at Taloom. At its height the goldfield attracted some 2,500 miners. The alluvial gold ran out quickly and reef mining was commenced by the Peel River Land Mining Co. As a result a more formal township was established. The goldfields continued to be productive until the 1890s.

* Today the district is dominated by dairying, cattle raising, some timber cutting and milling and tourism focused on 4WD exploring.

A decidedly unusual local website is http://www.bigvolcano.com.au/places/woodenbong.htm which, interestingly, also covers Urbenville. There is also an official page about the town on the Tenterfield Shire Council website. Check http://www.tenterfield.nsw.gov.au and go to "About the Shire" and then "Villages of Tenterfield Shire". 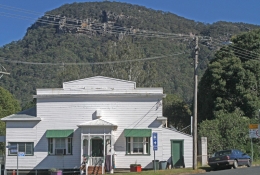 The centre of Urbenville with Crown Mountain - a volcanic plug - looming in the background. 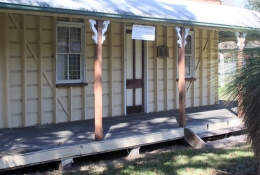 The external timber battens are an unusual feature of the Pioneer Cottage. 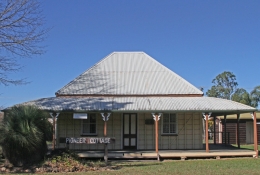 The Pioneer Cottage and Historical Museum