Retirement town at the mouth of the Bellinger and Kalang Rivers.

Welcome to Retirement Central for people who treasure their privacy and some genuine quietness beside the ocean. Here, in this small quiet township away from the rush of the Pacific Highway, it is possible to sit in the dining room at the Urunga Golf and Sports Club, have a meal and gaze across the confluence of the Bellnger and Kalang Rivers. It seems very close to paradise. There is a charming olde world, unhurried feeling about Urunga. It is far removed from the new waves of high rise development which have characterised so much of the New South Wales Far North Coast. It currently has a population of just over 3,000 of whom as many as 65 per cent are retirees who enjoy the simple lifestyle, love the beautiful walks along the river banks and around the foreshores; relax with a little fishing, golf and bowls in a climate which is always mild in winter, not too hot in summer, and enjoys lots of sun and healthy salt air. As one retiree at the Club explained: "It's a secret. Don't tell people about it." Urunga's great advantage is that it is by passed by the Pacific Highway. To reach the town the visitor has to leave the Pacific Highway, cross the railway line, and wind down into a town which doesn't seem to have an obvious centre.

Urunga is located 504 km north of Sydney via the Pacific Highway. It lies at the mouth of the Bellinger and Kalang Rivers.

It is accepted that the word "Urunga" means "long white sands" in the language of the local Gumbainggar Aboriginal people.

Urunga Museum
Located in the old School of Arts & Literary Institute building in Morgo Street, the Urunga Museum  is open from 10.00 am – 3.00 pm on Monday, Wednesday and 10.00 am - noon on Saturday. The Museum is worth visiting. Inside there is a collection of local artefacts which date from pre-European times and there is an extensive collection of photographs and documents. Outside is the headstone of James Thrower. It is rare in that it is a headstone without either a grave or a body.

The inscription on Thrower's gravestone reads: "Sacred to the memory of Mr. James Thrower late master of the cutter Comet of Sydney who suddenly departed this life in a boat while engaged in sounding the bar of the Bellinger River. His vessel laying at anchor June 4th 1846. This stone was erected by his bretheren of the Loyal Strangers Refuge Lodge of the independent order of Oddfellows, Manchester Unity as a pledge of their esteem." The Museum is located in the old Literary Institute, a charming wooden building which was constructed in 1896. For more information tel: (02) 6655 0382 or check http://bellingenmuseum.org.au.

The Wetlands and the Boardwalk
The Urunga Boardwalk is recognised as one of the best boardwalks on the New South Wales coast. It stretches for over a kilometre and provides views of the town, the banks of the Kalang and Bellinger Rivers, the ocean beyond the river mouth and views of the Great Dividing Range. At the mouth of the river there are views to Myleston Spit and Picket Hill. It is possible to see beyond Nambucca Heads. There is an excellent downloadable brochure. Check out http://urunga.com.au/wp-content/uploads/URUNGA_BOARDWALK_2014_web.pdf.

Urunga Lagoon Estuarine Wetland
The boardwalk spans the mouth of the Urunga Lagoon, an estuarine wetland which provides habitat for mangroves, seagrass and salt marsh. The lagoon extends 2 km south from the junction of the Kalang and Bellinger Rivers. It is about 200 m wide and covers about 600 ha

The Pilots Cottage
On the hill above the boardwalk, at 4 Morgo Street, is the old Pilot's Cottage which was built in 1876. It has a superb view over the river mouth and some unusual statues of pelicans above the front gate. It is now privately owned.

Ocean View Hotel
The Ocean View Hotel was first built in 1895 but destroyed by fire.  Rebuilt in 1927 it is a typical grand seaside pub with an excellent view across the river mouth.

The Honey Place
Located at 8147 Pacific Highway, which is just south of the Urunga turnoff, the Honey Place is open from 8.30 am - 5.00 pm. It has a kind of huge bee hive and is an ideal place to see the entire honey making process and purchase a wide range of honeys and honeycombs. Their Facebook page - https://www.facebook.com/TheHoneyPlace - provides additional information.

Dredging Up The Past
There are a number of informative signs on the boardwalk which offer insights into the geography and history of Urunga. One of the most interesting is the story of the dredging of the river mouth and the ongoing challenge of trying to keep it open to shipping.

"When the Bellinger Valley was first settled by Europeans, the mouth of the Bellinger and Kalang Rivers was not fixed in its current position. The form of the landscape we see today suggests that the river mouth has moved over time and that the Urunga Lagoon may hacve once been a main river channel. At that time, the entrance over the river bar was dangerous for the shipping which transported timber from the valley to Sydney and supplied the growing community with goods and food. To lessen the danger to the vital shipping trade, worked began on a series of 'training' was in 1890 which was completed in 1905. The aim of the walls was to fix the mouth of the river n one place and produce a deep water channel by the funnelling effect of the narrow entrance. Rock for the walls was obtained from ships ballast and later from a quarry on the Kalang River and shipped downstream on a punt. Despite the engineering works, ships continued to founder on the bar and the river mouth remained shallow and danger as sand shoals built up behind the walls. Regular dredeging was required to keep he channel open. In its heyday between 1900 and 1915 over 20 different vessels used the facilities of Bellinger Heads bu the advet of the railway and deep water facilities at Coffs Harbour resulted in the decline of the shipping to the Bellinger. Dredging operations ceased in 1929."

(b) Urunga to Hungry Head Loop - an easy walk of 7 km return which departs from the Museum, crosses over the boardwalk, walks along the shore of the Urunga Lagoon and returns via the surf club and the beach.

(c) Hungry Head to Wenonah Head Look - an easy walk of 13 km which starts at the Hungry Head car park and returns from Wenonah Head to the town on Osprey Drive. Check out http://urunga.com.au/wp-content/uploads/WALKING-URUNGA_2014_web.pdf for a map and details of the walks.

* Prior to European settlement the Urunga area was inhabited by the Gumbainggar Aborigines.

* In early 1840 a stockman and two ship-builders travelled northwards and discovered a new river north of the Nambucca.

* The Land Commissioner for the Macleay, Henry Oates, officially used Bellinger River in documents in 1840.

* In 1842 the Northumberland crossed the bar at the site of modern day Urunga. It did not proceed upstream but it was the beginning of an active trade in cedar with timber workers cutting the trees and waiting for the floods to carry them down to the river mouth.

* As the cutters cleared the land, farmers moved into the valley and grew maize and grazed dairy cattle.

* By 1868 a pilot station had been built at Urunga (at the time it was known as Bellinger Heads) to assist sailing ships trying to cross the shallow and dangerous bar at the mouth of the river.

* By 1872 there was a ferry/punt service across the Kalang River.

* In 1880 steam tugs were introduced to facilitate a safe crossing for ships.

* A steam tug was assigned to the Bellinger River in April, 1884.

* Urunga Island was proclaimed an Aboriginal Reserve in 1891.

* By 1892 the first 'training' wall was being built to control the mouth of the river.

* The village of Urunga was proclaimed in 1894.

* In 1900 a breakwater was constructed to help shipping.

* In 1908 the first boardwalk - little more than a footbridge and basic footway - was built so the pilot and local boatmen could gain access to the breakwall.

* In 1916 an Aboriginal school was established at Yellow Rock.

* In 1922 the last known Gumbainggar man, a man named Black Jimmy by Europeans, died at Bellingen.

* The North Coast railway line reached the town in 1923.

* The Urunga railway station was opened in 1926.

* A bridge across the Bellinger River was opened in 1928.

* Dredging operations on the Bellinger River and at the river's bar were stopped in 1928.

* By 1933 the Pilot Station had been closed down after the tug, Repton, was wrecked on the breakwater.

* In 1937 the Aboriginal school at Yellow Rock closed down. 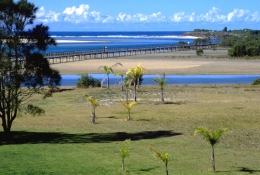 The boardwalk around the Bellinger River estuary at Urunga 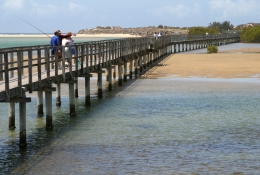 The boardwalk across the estuary at Urunga 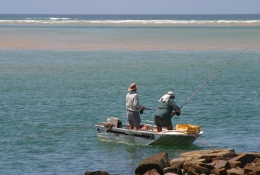 The idyll of retirement - fishing at the mouth of the Bellinger River. 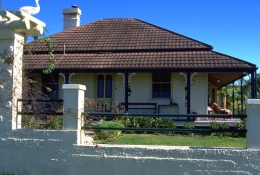 The Pilots Cottage (1876) complete with a pelican on the front gate. 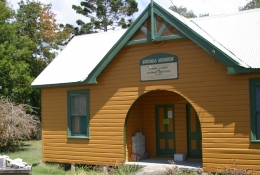 The Urunga Museum with the headstone to James Thrower in the porch. 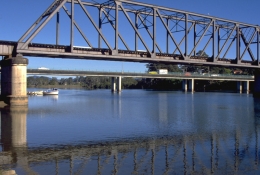