Roadhouse at the Victoria River crossing.

Victoria River is firstly the name of the river which meanders from the northern edge of the Tanami Desert to the coast near to the Western Australian-Northern Territory border. It is also the name of the Victoria River Roadhouse, a solitary but vital service between Katherine and Kununurra, which combines a restaurant, a caravan site, a motel and bush camping with good, reasonably priced (for the Northern Territory) petrol. The appeal of the area lies in the scenic beauty of the valley cut by the Victoria River and the rich opportunities offered by the Judbarra/Gregory National Park

Victoria River Roadhouse is located on the Victoria Highway 510 km south of Darwin, 195 km south-west of Katherine and 274 km east of the Northern Territory-Western Australia border.

The first European to explore the river was Captain J.C. Wickham in 1839. He reached the mouth in the HMS Beagle and duly named the river after his sovereign, Queen Victoria.

Judbarra/Gregory National Park
The Judbarra/Gregory National Park is broken into two sections - the eastern section and the western section. The smaller eastern area is around the Victoria River Roadhouse and a larger western area extends southward from Timber Creek to Depot Creek and Gibbie Creek. In total the park covers an area of 13,000 square kilometres (3,212,370 acres) which moves from tropical-monsoonal vegetation near the coast to semi-arid as it reaches south into the Tanami and Great Sandy Desert. The entire area is dramatically beautiful. The river has cut its way through the ranges and produced amphitheatres with rugged cliffs and escarpments which tumble down to the valleys. There are a number of places along the highway where the visitor can stop and take short walks into the Gregory National Park. Check http://www.parksandwildlife.nt.gov.au/__data/assets/pdf_file/0011/10550/Gregory20FS201120.pdf for a useful map and descriptions of the Limestone Ridge Loop Walk and the historic Bullita Homestead.

(a) The Eastern Section around Victoria River
Escarpment Walk
Described as a moderately difficult walk it is 3 km return and will take around 90 minutes. However it is possible to go only to Garrarnawun Lookout from the car park. This shorter walk is one kilometre and takes around 40 minutes. Plaques along the way tell the stories of the Nungali and Wardaman Aboriginal people and, at the top, there is a spectacular view of the Victoria River and the escarpment. It is located 2 km west of the Victoria River Roadhouse.

Joe Creek Picnic Area and Nawulbinbin Walk
Located off the Victoria Highway 10 km west of the Victoria River Roadhouse, this site is on the edge of the escarpment's scree slope. The Nawulbinbin Walk, which is a moderate to difficult 1.7 km loop walk which takes around ninety minutes, heads up the rocky slope to the base of the escarpment wall where the view is dramatic and there are examples of local Aboriginal rock art. It passes through areas of Livistona palm trees.

(b) The Western Section around Timber Creek
Gregory's Tree
Located 9 km west of Big Horse Creek campground, and 3 km off the Victoria Highway on a dirt road, is Gregory's Tree, an ancient boab tree. It is a sacred site for the local Ngarinman Aboriginal people and also the place where Baines, the artist on Augustus Charles Gregory's North Australia expedition, marked the arrival and departure of the expedition. The expedition camped on the banks of the Victoria River. There is an informative sign near the tree. The walk from the car park is 500 metres return. It is easy and there is wheelchair access.

Big Horse Creek
This campground, 10 km west of Timber Creek, is recognised as one of the most popular places for anglers looking to catch a few barramundi. It is worth noting that the fish have to be 55 cm long and their is a daily bag limit of five.

The 4WD Only Area
Sadly some of the best areas in the park are only accessible by 4WD on the Bullita Stock Route, the Tuwakam Track, the Humbert Track, the Wickham Track, the Broadarrow Track and the Gibbie Track. Along these tracks are a number of particularly attractive gorges including the Jasper Gorge on the Buchanan Highway and the Limestone Gorge which is off the Bullita Stock Route. This is semi-arid country where expertise and a sense of safety are essential.

* Prior to the arrival of Europeans the area had been occupied by the Nungali-Ngaliiwurru and Wardaman First Nation people for at least 40,000 years.

* The Victoria River was first explored by Europeans in 1839 when Captain J. C. Wickham reached its mouth in the HMS Beagle.

* In 1855 the explorer Sir Augustus Charles Gregory sailed from Moreton Bay in Queensland to explore the estuary of the river. With a crew of eighteen and a number of scientists and an artist, Gregory sailed up the Victoria River and then explored Sturt's Creek for 500 km before it disappeared into the desert.

* In 1879 the explorer Alexander Forrest crossed the Victoria River on his journey from the Western Australian coast to the Overland Telegraph Line.

* By 1883 sparse European settlement began with the establishment of the huge cattle stations at Victoria Downs and Wave Hill. The stations, both of which lie hundreds of kilometres to the south of the present site, have an important place in Territory history. Victoria Downs, once Australia's largest pastoral property and the largest cattle station in the world, was owned by Sidney Kidman, known as the Cattle King.

* Wave Hill Station was established by Nat Buchanan in 1883.

* In the 1920s, after a malaria epidemic, Reverend John Flynn built a hospital on Victoria Downs Station which was operated by the Australian Inland Mission until it closed in 1942.

* In 1966 the Gurindji Aborigines walked off Wave Hill station protesting about the working conditions.

* In 1975 Gough Whitlam's government handed over 3200 sq. km of land which had been taken back from Wave Hill Station. It was the first official recognition of the land rights claims of the Aborigines.

There is no specific website for Victoria River. There is an excellent downloadable map and fact sheet for Judbarra/Gregory National Park at http://www.parksandwildlife.nt.gov.au/__data/assets/pdf_file/0011/10550/Gregory20FS201120.pdf which covers the main attractions in the area. 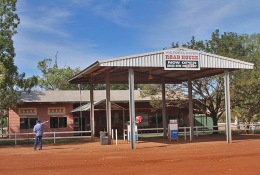 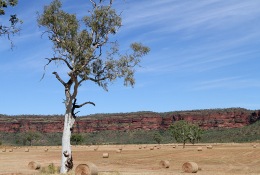 The view from the roadhouse across to the escarpment 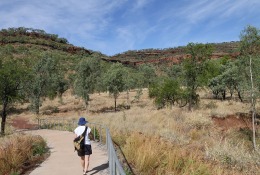 The beginning of the Escarpment Walk 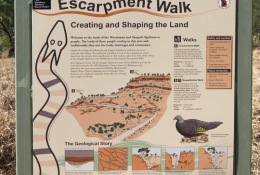 There is excellent signage along the Escarpment Walk route 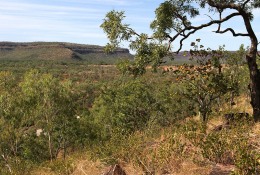 The view halfway up the Escarpment Walk at Garrarnawun Lookout 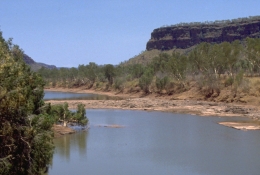