When a town is by-passed no one is sure what will happen. In the case of Violet Town, which lies just to the west of the Hume Freeway, it has become a charming town held in aspic. It is a small, quiet, picturesque and tidy town located on Honeysuckle Creek near the northern foothills of the Strathbogie Ranges.

It is widely accepted that the town got its name from Major Thomas Mitchell, the first European to pass through the district. On his Australia Felix exploration in 1836 he noted that the swamps and marshes in the area seemed to have a profusion of violets and named the district Violet Ponds. When the government laid out the village they called it Violet Creek. Some of the early settlers thought there was more evidence of Honeysuckle than Violets and, for a time, the settlement was known as Honeysuckle Creek. Violet Town, however, persisted.

Historic Buildings
The most notable buildings in the main street are the elegant Violet Town Hotel (it looks particularly impressive in spring when the main street is green and verdant) built around 1900 and National Bank Building (1905). There is a downloadable brochure on the town's buildings at http://www.violettown.org.au/images/thingstodo2b.pdf. It lists 18 places of interest in the town.

Violet Town Market
The famous Violet Town Community Market is held each month on the 2nd Saturday from 8.00 am to 1.00 pm at the Recreation Reserve in Tulip Street. The market has up to 250 stalls with fresh produce, arts, crafts, jewellery, wine tastings, plants, tools, furniture and more.There is also live music, hot food and great coffee. For more information check out https://www.violettown.org.au/market.

* For thousands of years prior to European settlement the Taungurong people occupied the land around Violet Town.

* The first European to pass through the area was the explorer Major Thomas Mitchell in 1836. He noted that the area was swampy and, having camped by some ponds where wild violets were in bloom, he named the spot Violet Ponds.

* In 1838 the government surveyed a village site which they called 'Violet Creek'. This was the first inland surveyed town in Victoria. The following year land was put up for sale. There were two purposes to this development: it was argued that a police station was needed because of the Faithfull massacre (see Benalla) and it was planned as a town with 'Houses of Entertainment' (pubs etc) designed to serve the traffic 'on the road between Port Phillip and Yass'. For a time it was an important stopping point on the road from Melbourne to Sydney.

* In 1846 the Royal Mail Hotel was opened and the village began to grow but it wasn't until the discovery of gold in the north-east of the state - which produced large numbers of itinerant prospectors who passed through the area - that the town expanded to include three hotels, a bakery and a school.

* As the town grew the floral theme was adopted for the streets so that now there is Cowslip, Tulip, Daisy, Dahlia, Crocus, Hyacinth, Lily, Orchid and Rose Streets.

* In 1873 the railway arrived and the village moved closer to the line.

* In 1895 the Violet Town shire was gazetted. In 1994 it was united with adjoining shires to become part of Strathbogie Shire. It had been an independent shire for nearly a century.

* In recent times the town has become a footnote to Australian pop music history. It was where Ella Hooper, the singer/songwriter and her brother, Jesse Hooper, from the band Killing Heidi, grew up.

The town has its own local website: http://www.violettown.org.au/ and there is a very useful history of the town on the Monash University website: http://web.archive.org/web/20060824200713/http://www.arts.monash.edu.au/ncas/multimedia/gazetteer/list/violettown.html#details 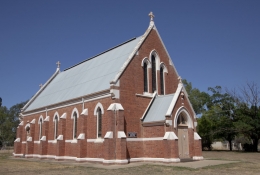 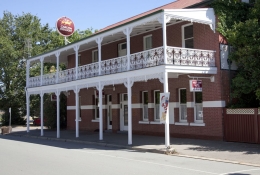 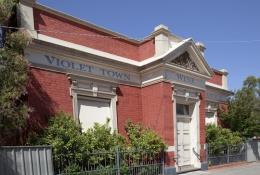