Home of the Giant Ram in the heart of the wheat and sheep belt.

Wagin was originally a railway station for the surrounding wheat and sheep properties. It was created out of the combination of grain silos, bulk loading facilities and a rail link. Today the town's economic base has expanded to include barley, oats, lupins, canola and cattle. It has two major tourist attractions - the Giant Ram (one of Western Australia's most famous "big things") and the excellent Historical Village, a 26 building recreation of a typical wheatbelt rural village.

Wagin is 257 m above sea level and located 236 km south-east of Perth via the Albany Highway and Arthur Road.

There is some debate around the Noongar word "wagin" with it either meaning 'the place where emus watered' or a variation of a word pronounced 'wedge-an' which was simply a word for 'emu'.

Wagin Historical Village
The Wagin Historical Village, located on Showground Road, was started in 1978 and has since grown into the town's main tourist attraction. There are currently 26 buildings, all furnished to reflect their origins, including a Village Church, a replica of an 1880s cottage, an Aboriginal Mia Mia shelter, a Bag Tent, a Woolshed, Stables and a Cowshed, a community hall, a wattle thatch farm dairy, an old Bank, a one-room School, Printing shop, wattle and daub humpy, shepherd’s camp, Community Hall, Blacksmith’s Shop, Barber’s Shop, Dressmaker and Mallee Root Shed. Many consider it to be the best historic village in Western Australia and one of the best in the country. It is open every day from 10.00 am - 4.00 pm. There is a very comprehensive website with descriptions of every one of the buildings. Check out http://www.waginhistoricalvillage.com/ for additional details.

The Giant Ram and Wagin Woolorama
Wagin's Giant Ram stands 7 m tall, is 15 m long, weighs 4 tonnes and is 9.2 times larger than the prize-winning stud ram upon which the sculpture was based. The brainchild of local TAFE teacher, David Chappell, who launched the project in 1984 and persuaded the twelve local studs to contribute to the $35,000 it cost to build the "big thing". Chappell started by taking hundreds of stereoscopic images of the prize stud ram which came from the Galoran stud. He sent the images to the Photogrammetry Department at the West Australian Institute of Technology where a computer model was created. In July, 1984 Perth sculptor, Andrew Hickson, was commissioned to produce the Giant Ram. He took 18 months to build the ram in Walker's Silo Shed in Wagin. When it was finished it was moved by crane (the overhead electricity lines had to be lifted to let it pass) to its final resting place 1 km away. The Shire President cut the ribbon when it was officially "unveiled" on 9 May, 1985. Chappell had been inspired by the Wagin Woolorama - a hugely successful annual agricultural show held each March which is reputedly second only to the Perth Royal Show (reputedly the largest sheep show in the Southern Hemisphere) and which draws tens of thousands of people to the town each year.

Wagin Town Heritage Walk
With the town really only coming into existence in 1889 many of its ‘historic sites’ are quite recent. The Heritage Walk includes St George’s Anglican Church (1902), St George’s Hall (1912), the Wagin Masonic Lodge (1907), the Old Power House (1914), the Wagin Road Board Office (1912), the Palace Hotel (1905), the Wagin Town Hall (1928) and the Court House. It is basically a collection of early twentieth century buildings. The pamphlet is available at the Wagin Historical Village.

The Wait-Jen Trail
The Wait-jen Trail is a pleasant and peaceful 10.5 km walking trail (it takes about 4 hours) which passes four of the lakes on the Coblinine river system. Information panels and interpretative signs along the trail provide an insight into the Noongar Aboriginal culture and land management.

* Prior to the arrival of Europeans the land around Wagin was occupied by the Noongar people.

* The Western Australian Surveyor General, John Septimus Roe, was the first European into the area. In 1835 he reached Mount Hugel (he named after the German scientist, Baron Hugel) which lies south of the town.

* Between 1835 and 1889 a small number of settlers lived in the area and earned a living cutting sandalwood and raising small flocks of sheep.

* Land in the Wagin area was granted to pastoralists from the late 1870s.

* The town came into existence as a result of the construction of the Great Southern Railway which was completed in 1889.

By 1898 Wagin had been proclaimed a town and

* by 1906 it had become well established as a major service centre for the surrounding area. 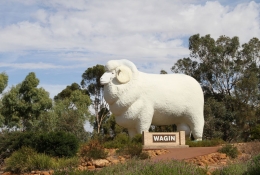 The Big Ram, with the Big Testicles, on the edge of Wagin. 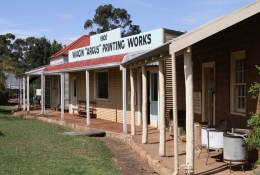 Some of the shopfronts in the Wagin Historical Village.