Murray River town known as 'The Citrus Centre of Australia'.

Waikerie is a small, pleasant town sitting on the cliffs above the Murray River in the heart of South Australia's rich Riverland district. It is surrounded by citrus orchards and extensive stands of apricots, peaches, pears and plums. The cliffs at this point in the Murray are so high that water from the river has to be pumped up to provide the orchards with water.

Waikerie is located 177 km north-east from Adelaide and 30 metres above sea level on the Murray River.

It is believed that the Ngawait Aborigines, who inhabited the area before the arrival of Europeans, called the giant swift moth, "wei kari" meaning "many wings' It is from their language that the town's name derived some sources believing that it means 'many wings or birds' or 'anything that flies'.

Waikerie Heritage Walk
The Waikerie Heritage Walk lists a total of 34 places of historic interest in the town. It is a 2 km walk which will take around 2 hours to complete. There is a map and detailed descriptions of the sites at http://www.waikerie.com/waikerie-heritage-walk. Of particular interest are:
4. Police Station 1914-1975 This was the first government building in town. Made from local stone it is now a private residence.
13. Clifftop Lookout - take Goodchild Street off Peake Terrace and you will reach the Scenic Lookout which is perched on top of the cliffs and offers excellent views across the Murray (with the ferry far below) and also of the large chimney which is now protected by order of the National Trust.
16. Doctor's Residence - part of the problem of creating a controlled settlement was getting specialists. This house was built in 1912 by the community to attract a doctor. It operated as a doctor's residence and consulting room from 1912-1981.
22. Bank of Adelaide It began trading in the town in 1910. This building was completed in 1913 and now houses the ANZ Bank.
25. Methodist Church - now the Uniting Church this charming stone building was completed in 1912.
32. Waikerie Co-op Located in Ian Oliver Drive on the edge of the town centre this is the town's original raison d'etre. The Waikerie Co-op began trading in 1914, dealing mostly with dried fruits, such as apricots, peaches, pears, currents, sultanas and raisins. As more citrus groves were developed, private packers of citrus took their fruit to the Coop for packing. The building was extended several times to eventually become the largest citrus packing house in the Southern Hemisphere. The business is now owned by Nippy’s and it is still possible to buy directly from the company at the "cellar door", so to speak.

Waikerie Cliff Top Walk and Lookout
The Waikerie Cliff Top Walk and Lookout is a pleasant track along the top of the cliffs starting from the ferry, climbing up to the Clifftop Lookout (which is an ideal place for views across the Murray and down to the ferry) then along the cliffs to the Rotary Clifftop Lookout. It is 2 km long, takes around an hour and is described as easy.

Hart Lagoon Walking Trail
Starting at the Waikerie Caravan Park, which lies to the west of the town centre, this is a 7 km loop around Hart lagoon. The walk is easy and there is signage to point out the birdlife in the lagoon.

Holder Bend
Located east of Waikerie on the road to Kingston on Murray, Holder Bend offers an excellent opportunity to admire the cliffs which run along the southern shoreline of the Murray River at this point.

Gluepot Reserve
The Gluepot Reserve is located 64 km north of Waikerie on well maintained dirt roads. Facilities include a visitor information centre, campgrounds, birdhides, driving and walking tracks, and brochures. Guided tours are also available. The excellent website explains: "Gluepot Reserve is BirdLife Australia's first publicly funded Reserve. Located in the semi-arid South Australian mallee it is considered by many to be one of the crown jewels in the nation's reserve system. This 50,000 ha large area of virgin mallee scrub contains no less than 6 nationally endangered bird species and a unique flora and fauna adapted to the harsh conditions. Purchased in 1997, Gluepot is rapidly becoming a centre for scientific research. Its accessibility means it is one of the few areas in Australia where birdwatchers can relatively easily observe otherwise hard-to-find species ... Gluepot is a birdwatchers' paradise with 190 species recorded including 6 that are nationally threatened. These include Black-eared Miner, Malleefowl, Red-lored Whistler, Regent Parrot, Scarlet-chested Parrot and Striated Grasswren. A further 17 regionally threatened bird species live there (eg Major Mitchell Cockatoo, Hooded Robin and Redthroat). See http://www.gluepot.org. For all information check out the detailed and downloadable information sheet at http://www.gluepot.org/printvisit.pdf.

* Prior to European settlement the area was inhabited by the Ngawait Aborigines who lived on a rich diet of kangaroos, emus, wombats, goannas, lizards, ducks, turtles, fish, snakes and bird eggs all of which existed on the banks of the river.

* The first European into the area was Captain Charles Sturt who, trying to answer the question as to why rivers flowed westward from the Great Dividing Range, rowed a whale boat down the Murrumbidgee in late 1829 and reached the junction with the Murray River on 14 January 1830. He continued down the Murray River passing the site of modern day Waikerie and commenting on the grandeur of the cliffs in the area. He reached Lake Alexandrina on 9 February, 1830.

* It wasn't until the establishment of Goolwa as the port at the mouth of the Murray in the 1850s that people began to use the Murray for inland riverbound transportation.

* By 1880 the Shepherd brothers had settled the land around Waikerie.

* By 1888 the Government had cancelled the pastoral leases and was surveying the land for closer settlement.

* The township was established in 1894 when 281 people arrived in a paddlesteamer as an experiment in controlled settlement. Fortunately the experiment worked.

* By 1910 the township was named Waikerie (after the station) by Governor Bosanquet. It was the first of the Riverland towns.

* In 1912 a doctor's residence was built in the hope of attracting a doctor to the town.

* In 1921 a pipeline was built to Maize Island and orchards were established there.

* People living near the Murray River was resettled due to concerns about floods in 1975.

There is an impressive local website. Check out http://www.waikerie.com for information about accommodation, houseboats, attractions and fine food eateries. 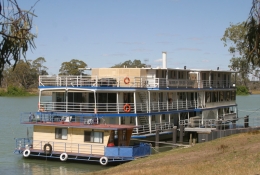 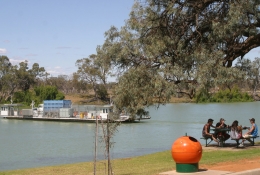 A distinctive orange-shaped waste bin beside the Murray near the town ferry. 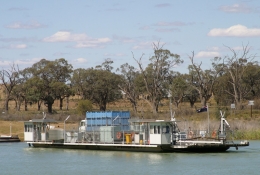 The ferry across the Murray River at Waikerie 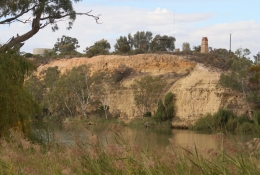 The cliffs near the ferry and the town at Waikerie. 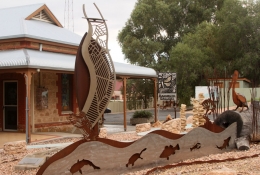 The sculpture outside Rainmoth Gallery in the main street. 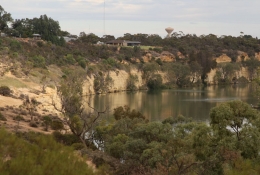 The cliffs down river from Waikerie at Holder Bend.