Walgett is the rural service centre for an enormous pastoral area which stretches to the state border. The town is located by the Namoi River near its junction with the Barwon River in northern New South Wales . The town describes itself the 'Gateway to the Opal Fields' as it is on the road to Lightning Ridge and the Grawin, Glengarry and Sheepyard Opal Fields. The district around the town is known for its wool, beef cattle, chick peas, barley, lucerne, fat lambs, sheep studs, cotton and wheat. Its riverside location also makes it a good spot for fishing: Murray cod and yellowbelly being the predominant catches. The population in the town is divided equally between Aborigines and non-Aborigines.

Walgett is located 648 km north-west of Sydney via Mudgee and Gilgandra, 76 km from Lightning Ridge and 115 km north of Coonamble . It is 135 m above sea-level.

The early European settlement occurred on the Namoi River in 1851. It was named 'Wallgett' which was reputedly a Kamilaroi word for "the meeting place of two rivers".

Dharriwaa Elders Group Cultural Exhibition Centre
Located at 47 Fox Street, the Dharriwaa Elders Group Cultural Exhibition Centre  houses and extensive collection of local Aboriginal arts and crafts including paintings, carved emu eggs, jewellery. There is a permanent exhibitions - Memories of living outside Walgett - which recalls the local camps at the Walgett Aboriginal Station, the Namoi Riverbank and the Montkella Bend from the 1920s to the 1970s. The centre is open Monday - Friday 10.00 am - 1.00 pm. Check out http://www.dharriwaaeldersgroup.org.au for more details. There are also items for sale and lots of information about the Aboriginal history of the district.

Norman 'Tracker' Walford Walkway
The 'Tracker' Walford Walkway starts at Warrena Street and continues along the banks of the Namoi River for 1.5 km. Norman Walford worked as a tracker with the NSW Police from 1948 to 1973 and the track celebrates his remarkable life. There are a number of interpretative signs along the way and walkers are alerted to the birdlife along the river as well as the scar trees and the history of Aboriginal trackers. Check out http://www.dharriwaaeldersgroup.org.au/index.php/trackersbrewery for more information.

Grave of Jimmy Little
The hugely important Aboriginal singer, Jimmy Little, was a resident of Walgett after he married the local Walgett woman, Marj Peters. His grave is located in the cemetery on Bate Street. Check out http://www.dharriwaaeldersgroup.org.au/index.php/jimmy-little-grave for more details and a map of the site.

Jimmy Little Memorial on the Water Tower
Located on the Walgett Water Tower (clearly visible as you enter Walgett) is the  Jimmy Little Memorial Mural which celebrates Australia’s first, hugely successful First Nations musician who lived in Walgett for a time. It was opened in 2020. Jimmy Little was voted a National Living Treasure in 2004 and awarded the APRA prestigious Ted Albert Award for this Outstanding Services to the Australian Music Industry in 2010. The mural is based on a photograph by John Elliott, who also took photographs of well known Australian country music performers. The portrait was created by Jenny McCracken with the Aboriginal background has been designed by local Gamileroi artist Frank Wright. It will include a river system map of the area and local totems.

Walgett Historical Museum
Located in Fox Street, the Walgett Historical Society Museum has displays of photographs which tell the story of the town from the time paddle steamers arrived. It also pays homage to Frederick York Wolseley who invented the first mechanical shearing machine and many other agricultural implements on Euroka Station. The museum has displays of his inventions. For more information tel: (02) 6828 1678.

Walgett Levee Bank
Walgett is located at the junction of the Barwon and Namoi Rivers and consequently it has been subject to major flooding over the years. The record flood of 1890, which flooded the entire town was the highest recorded when the Barwon reached a peak of 13.84 metres. A brass plate on the old Post Office at the corner of Fox and Wee Waa streets, denotes the height of the water in the town at that time. Other major floods followed in 1921 at 13.33 metres and in 1950 at 13.46 metres.
After the 1950 flood tenders were called for the construction of a levee bank. By April 1961, the successful tenderer’s were Phillips Construction Pty Ltd who, over a period of 22 weeks, using scrapers, bulldozers, graders and water carts constructed the first permanent levee bank in Australia. It was 8.2 km long.

Walgett Court House
Located in Wee Waa Street, the Walgett Courthouse was designed by Colonial Architect James Barnet and constructed in 1880 at a cost of £3600. The builder was Daniel Edwards. The State Heritage Register records that the "Walgett Courthouse is a symmetrical design in the late Victorian Regency style. The building consists of a high central courtroom flanked by single storey wings. Detailing consists of a posted verandah colonnade which surrounds the front of the building, circular arched brick window openings and flat arched door openings and a corbelled brickwork pediment ... [It] is constructed in face brick with corrugated iron roofs. The verandahs feature timber posts. The interior features timber joinery and furniture." For more details check out https://www.environment.nsw.gov.au/heritageapp/ViewHeritageItemDetails.aspx?ID=3080125.

Opal Fields at Grawin, Glengarry and Sheepyard
The Grawin, Glengarry and Sheepyard Opal Fields are located north-west of Walgett via the tiny village of Cumborah which is 48 km north-west of Walgett along a sealed road. A spring flows in Cumborah and the gravel pits nearby are good for fossicking. The Grawin field was where 'The Light of the World' (450 g) opal was found in 1928. There is a general store, fuel supplies and a log-cabin pub known as the Club in the Scrub (02 6829 3810), which is the centre for a number of social and sporting events.
Further along (another 7 km) is the Glengarry field. There is an airstrip, a pub known as the Glengarry Hilton (02 6829 3983), and an active social golf club. And the Sheepyard Field can be accessed from Glengarry. The newest and most productive of the three fields, there is a store and pub known as the Sheepyard Inn (02 6829 3932). Apart from seeing opal mining in the toughest of situations, the three local pubs are magnets for visitors.

Narran Lake Nature Reserve
Located 112 km west (it lies north of the road to Brewarrina), Narran Lake is one of Australia's largest natural inland lakes and has an abundance of animal and birdlife. It was created in 1988 and covers 26,480 ha, Narran Lake Nature Reserve is not open to members of the public. In order to protect nesting birds, access to the reserve is limited to those undertaking scientific studies. A specific area of 8,447 ha is protected under the Ramsar Convention as it is a hugely important bird breeding area which supports "the largest colony of straw-necked ibises (with up to 200,000 pairs), over 1% of the world populations of Australian pelicans and black-fronted dotterels, and small numbers of endangered Australasian bitterns.[5] Other birds which have been recorded in relatively large numbers include pied, little black and great cormorants, freckled and pink-eared ducks, black swans, glossy ibises, whiskered terns, royal spoonbills and darters."  For more information check out https://www.nationalparks.nsw.gov.au/visit-a-park/parks/narran-lake-nature-reserve or tel: (02) 6792 7300.

History of Kamilaroi in the area
Relations between the white settlers and the Kamilaroi peoples along the Barwon and Macintyre Rivers were particularly ugly. There were conflicts over land, food, customs and the rape of black women but matters weren't helped by the Myall Creek Massacre and the murderous actions of Major Nunn's troop on the Namoi River. Both outrages were inflicted upon the Kamilaroi and both occurred in 1838 as white settlement of the Barwon River was commencing. Along with drought and economic recession, this conflict successfully slowed settlement until the introduction of the native police whose tactics and firearms quashed resistance by 1850. The Aborigines then retreated. Some returned to work as station hands. Today there are over 1,000 indigenous people in the town and nearly 30% of the shire is Aboriginal.

* Prior to the arrival  of Europeans the area was home to the Kamilaroi Aboriginal people for at least 40,000 years.

* The first European in the area was John Oxley who named and crossed the Castlereagh River to the south during an exploration of the interior in 1818.

* Charles Sturt pushed further north along the Castlereagh in 1829, coming to within 32 km of present-day Walgett.

* Escaped convict George Clarke explored the district with the Kamilaroi people in the years 1826-1831.

* In 1832 Sir Thomas Mitchell explored the area and encountered the Barwon River a little south of present-day Mungindi.

* The first settlement on the Barwon River occurred between 1839 and 1842.

* A tent was pitched at a crossing on the Namoi River in 1851 and it served as the colony's outermost post office.

* In 1859 a townsite was surveyed and gazetted on high ground by Arthur Dewhurst who named two of the major streets after himself.

* In 1860 a slab hut police station was built, a court of petty sessions established and the first store and hotels erected.

* Walgett became the centre of a new police district in 1863.

* In 1868 a party of travellers were bailed up by Captain Starlight (Frank Pearson) and Charles Rutherford, who stole monies and a pistol.

* A regular coach service to Sydney commenced in 1874.

* The first bank opened in 1876 and a school and hospital were built.

* By 1881 a new courthouse and police station in Wee Waa St and a post office of brick.

* Frederick Wolseley of Euroka completed work on the world's first successful sheep-shearing machine on his property in 1885.

* The sheep shearing machine was patented in 1887 and was extensively implemented on local stations by the end of the decade.

* In 1903 the office of the local newspaper burnt down.

* In 1965 Freedom Riders from Sydney, led by Charles Perkins, protested about discrimination against Aborigines in the town.

* In 2003 the Walgett Community College was established.

In the summer of 2012/2013, dubbed The Angry Summer by the Climate Commission, the temperature in Walgett reached a new recorded high of 48.5°C.

The local council has a useful section of its website. Check out https://www.walgett.nsw.gov.au/tourism. 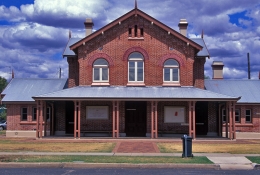 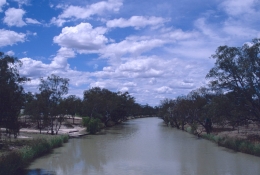 The Namoi River at Walgett 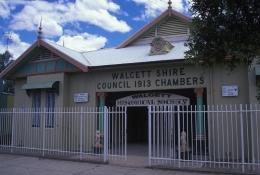