Town established in the Riverina by German Lutherans from South Australia

Walla Walla is a small country town with a fascinating history. Like most small country towns it services the surrounding district and would be ignored by travellers passing through if it wasn't for the very impressive Zion Lutheran Church in the town's main street and the fascinating history - recounted in the Trek Wagon beside the church - of the Germans who travelled across from South Australia to settle the area in the 1860s.

Walla Walla is located 541 km south-west of Sydney and 370 km north-east of Melbourne via the Hume Freeway. It is 39 km north of Albury.

Walla Walla, like Wagga Wagga, is a Wiradjuri word. In their definitive dictionary of the Wiradjuri language, Stan Grant Snr and Dr John Rudder, point out that 'walla' "seems to be linked to the concept of strength or hardness" which could mean that the name reflects the hardness of the granite outcrops in the area. The sign at Morgan's Lookout suggests that Walla Walla was originally Walan Walan meaning "place of many rocks or rocks overlooking water". Take your pick.

Zion Lutheran Church
The Zion Lutheran Church was built in 1924 (the foundation stone was laid in 1923) and is reputedly the largest Lutheran Church in New South Wales with a seating capacity of 600 people. The original granite church (1872) is still standing nearby and a mud and stone school dating to 1875 also stands beside the church. Nearby is an interesting display - the Trek Wagon - recording the history of the German settlement of the district.

The Trek Wagon
Just along from the Zion Lutheran Church is the Trek Wagon, a record and celebration of the journey made by eight families from Ebenezer in South Australia to Jindera and Walla Walla. There is a placard which explains the journey "The Trek party, using 14 wagons and 2 spring carts, left Ebenezer SA (near Nuriootpa) on 13 October 1868 and arrived in Jindera NSW on 20 November 1868. Eight families came as a group of 56 people. The wagons are thought to have been built in SA but are of the original German design. The Murray and Edward rivers were followed for the best part of the journey. A few days after reaching Jindera, the men moved on to camp near Walla Walla, and selected land. Once registration was completed the women and children left Jindera for their new homes - which were yet to be built. This typifies the faith and determination of our ancestors in overcoming hardship to start new lives at Walla Walla in 1869" and the names of the families - Fischer, Wenke, Schmidt, Luhrs, Hennersdorf, Terlich, Lieschke - are recorded on the sides of the trek wagon. There are also pieces of memorabilia and a map in the display.

Morgan's Lookout
Located 8 km from Walla Walla and directly opposite the property now known as Walla Park, Morgan's Lookout is a striking and impressive rocky outcrop in what is otherwise very flat country. Daniel 'Mad Dog' Morgan reputedly used this granite rock formation as a vantage point to watch for approaching victims and police. There are metal steps which allow the visitor to get to the top of the rocks. The view of the rich surrounding countryside is worth the effort. There is a detailed sign at the top of the lookout which explains "Geologists have described this conglomerate white granite formation as being the centre core of an extinct volcano. When settlers first arrived in about 1842 the area was an Aboriginal camping site.
"During the early 1860s the bushranger Daniel Morgan used it as a refuge and lookout point for the traps (troopers) who pursued him. Morgan frequently visited Walla Walla station homestead for fresh supplies which were freely given for the good for their health. The rocky outcrop was named 'Morgan's Lookout' after the bushranger's death in 1865.
"During the 1890s the lookout was the local point of the national shearer's strike from which the A.W.U (Australian Workers Union) was founded. Hundreds of shearers congregated on the banks of the Billabong Creek on Walla Walla station, striking against low wages and working conditions. After many months their cause seemed lost. Stations used their workers and family members to shear the sheep. The shearers vowed to burn the countryside out. Stations banded together and built Oregon timber ladders at this lookout. Several fires were lit but this early warning centre resulted in quick action to contain them." The rocky outcrop was re-established in 1971 by the Culcairn Jaycees and the Paech family whose property the lookout is situated on.

Gum Swamp
The Gum Swamp, a high conservation wetland located in the South West Slopes bioregion, is home to many threatened species, including the White-bellied Sea Eagle, the Fishing Bat and the Squirrel Glider.

* Prior to the arrival of Europeans the area around Walla Walla was inhabited by the Wiradjuri people.

* The first Europeans into the area were the explorers Hume and Hovell in 1824 making their epic journey from New South Wales to Port Phillip. They reported on the richness of the grasses in the district.

* By 1834 the first squatters were taking up land.

* By 1845 four stations, including Round Hill and Walla Walla, had been gazetted.

* In November 1864 the bushranger 'Mad Dog' Morgan visited Walla Walla station. Morgan, always the charmer, spoke to the servants and station hands, asked after their treatment and told them to let him know if they were being treated badly.

* Huge changes came to the area when, in the summer of 1868-69 a group of 56 German setters (eight families) travelled by wagon from Ebenezer in the Barossa Valley in search of good land. They settled in the area, built a Lutheran church and encouraged others to follow. So successful was the migration that within a decade sections of local newspapers were being printed in German.

* Today Walla Walla station is known as Walla Park and is near Billabong Creek 8 km north of Walla Walla.

There is no official visitor centre in Walla Walla but the Walla Store at 73 Commercial Street is useful for local information, tel: (02) 6029 2231.

There is a local website - http://wallawalla.nsw.au - which has information about community activities. 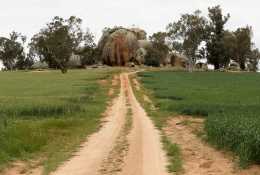 The road leading up to Morgan's Lookout 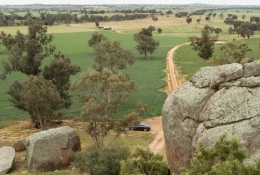 The panoramic view from the top of Morgan's Lookout. 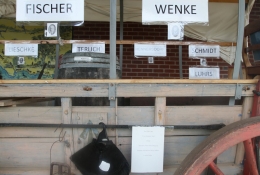 The Trek Wagon with the names of the families who made the six week journey from South Australia. 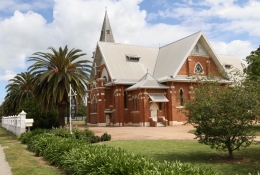