Wallabadah is tiny village that straggles along the New England Highway. It lies surrounded by fine wool, stud cattle and prime lamb country. It has two historic buildings but the main attraction, incongruous in the region, is the comprehensive and sophisticated First Fleet Memorial Garden where visitors can learn about the people who travelled to Australia on the First and Second Fleets.

Wallabadah is located 351 km north of Sydney on the New England Highway. It is 54 km south of Tamworth.

The Kamilaroi First Nations people, who inhabited the area for tens of thousands of years before the arrival of Europeans, called the district "Thalababuri". No one is certain of the meaning. However it is believed that Wallabadah means "stone" in the Kamilaroi language.

First Fleet Memorial Garden
In 2003 a stonemason/gardener/landscaper, Ray Collins-Cross, began the remarkable task of building a memorial to the First and Second Fleets which brought convicts to Australia. It was, by any measure, an extraordinary project where winding pathways passed stones on which the names of the crews, passengers, New South Wales corps and convicts were chiselled. The histories of each ship are profiled on "sail" boards and, because it is a rest and recreation area, the picnic area is shaped like a ship with sun shields for the sails. The First Fleet Memorial Gardens are located near Quirindi Creek on the New England Highway.
The obvious question is "Why Wallabadah?" a tiny town far removed from Sydney were the First and Second Fleets landed. The answer is a caustic comment on the small minded values of local councils. A plaque explains: "This memorial is for the descendants of those who sailed on the First Fleet. Many of these descendants now regularly use this area for family reunions and for quiet reflection. There is no other Memorial in Australia that lists all the names of the people who sailed on the First Fleet. The Memorial's physical location is not that important as the descendants come from all parts of Australia and from overseas. Liverpool Plains Shire Council supported the vision of Ray Collins, a descendant, who built this Memorial. The rejection of this vision by other locales within New South Wales is why it is here today."

White Box Plantation
The largest undisturbed area of White Box forest left in Australia is located near the Wallabadah cemetery off  Elizabeth Street.

Goonoo Goonoo
Located 31 km north of Wallabadah on the New England Highway is Goonoo Goonoo (pronounced 'Gunny Ga-noo' and said to mean 'plenty of water') station. It is on the left with rather handsome, if simple, stone gates. It is one of Australia's most historic sheep stations although, after it was purchased by coal baron, Tony Haggerty, for a reported $25 million in 2011, it was converted from sheep to cattle. The history of the property is the story of great wealth in Australia. The land was granted to the Australian Agricultural Company in 1832. They received 600,000 acres (242,811 ha) at Goonoo Goonoo and at Warrah, west of Willow Tree, in exchange for a portion of their famous one-million acre grant at Port Stephens. The land was selected and surveyed for the company by Henry Dangar and stock began to arrive in 1834. Goonoo Goonoo became the company headquarters in 1841. What remained of the old property was sold by the company into private hands in 1985 and Tony Haggerty acquired it in 2011. A number of old buildings, which once formed a private village, remain. The chapel is to the rear of the homestead (1840). There is a gabled rubblestone store with brick arches (1853), a large brick wool shed (divided into three gabled sections) on a hill - it is currently being repaired and renovated, and a memorial fountain in remembrance of George McArthur Gidley King, the son of Elizabeth Macarthur and Philip Gidley King is a prominent feature. There are moves to convert the outbuildings into a tourist destination - restaurant, event venue, hotel. The Northern Daily Leader reported in 2014 that "The $4.7 million development application provided for a woolshed to be made into a function centre and restaurant, holding up to 136 and 134 people respectively. The proposal included renovating a dilapidated chapel to host weddings and turning a run-down schoolhouse into a bridal waiting area. With the station having severed its ties to the sheep industry to focus on cattle grazing, 11 short-term accommodation units will be created in the old shearers’ quarters." For those who are interested the Facebook page of the new owners tells the story.  Check out https://www.facebook.com/pages/Goonoo-Goonoo-Station/290170327835116?sk=photos_stream&tab=photos_albums.

* Prior to the arrival of Europeans the district was inhabited by the Kamilaroi First Nations people who called the area 'Thalababuri'.

* The first European settlers began squatting in the district around 1830.

* A village emerged in the 1850s at the road junction where the mail coaches north and north-west met.

* On 30 May, 1867 Captain Thunderbolt robbed the northern mail coach at Wallabadah. That year the Marshall MacMahon Hotel and the local public school were both opened.

* When the railway arrived at Quirinda in 1877 the importance of the town declined.

* The Anglican Church of the Ascension was consecrated in 1896. Additions were added in 1912.

* Wallabadah was the location for soldier settlement after World War II.

* In 2005 the First Fleet Memorial garden was officially opened. 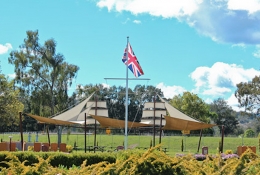 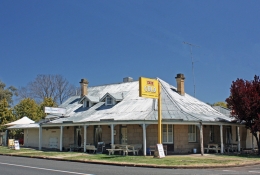