Wallangarra is one of Queensland's southern-most towns. It is located on the New South Wales-Queensland border and is a product of the two state governments deciding to build railways of different gauges (1067 mm for Queensland and 1435 mm for New South Wales). When the railways were completed this meant that people travelling from one state to the next had to alight at Wallangarra and change trains. Not surprisingly this ensured that the tiny settlement became a major railway junction. Today the town's most impressive feature is the rather grand Victorian-era railway station. A monument to the state rivalries and the foolishness of politicians.
Although the town is located in Queensland it is nestled into the range of mountains which includes the New South Wales towns of Glen Innes and Armidale. Although climatically its weather seems to come from the south, in many other ways it is very much a Queensland town. In winter it can be particularly cold (temperatures can drop below freezing) although tropical Queenslander houses, designed to allow cool air to circulate freely in the summer months, are still in evidence. The town's main attraction is the Railway Station, an important monument to interstate rivalries and now an interesting railway museum.

Wallangarra is located on the New South Wales - Queensland border 256 km from Brisbane via Stanthorpe and 769 km from Sydney via the New England Highway. It is 877 m above sea level.

It is accepted that Wallangarra is a local Aboriginal word probably meaning "lagoon". It is created by the combination of "wallan" meaning water and "guran" meaning long.

Wallangarra Railway Station and Museum
This fascinating railway station tells the story of the rivalries between Queensland and New South Wales before the establishment of the Commonwealth of Australia on 1 January, 1901. Inspect the building and register that the Wallangarra railway station was built astride the state border with a single island platform with one building, with the western side for the narrow gauge line from Queensland and the eastern side for the standard gauge line from New South Wales.
The Queensland Heritage Register explains: "The station was built on an island platform, with station awnings on both sides. The Queensland side awnings (western platform) being to Queensland design patterns and that on the standard gauge side (eastern platform) being built after New South Wales pattern. The New South Wales government completed its railway line to the border station in January 1888. The New South Wales awnings were not constructed until 1890. Both colonies had name boards in their usual style, the Queensland one having a hyphenated name board (Wallan-Garra), whilst New South Wales substituted with Wallangarra. The original station building occupies the present southern section, and consisted of office, lobby, store and closets. The booking office also served as the customs office and general waiting room as well as the Station Master's office. In 1892 drawings were prepared by Henrik Hansen for a new bar, dining room, Refreshment Room female staff (girls) bedrooms and kitchen.
"By 1884 the train travelling between Brisbane and Stanthorpe had been referred to as a 'Mail' train running with a Travelling Post Office. The opening of the inter-colonial line saw the introduction of a regular train service between Sydney and Brisbane, the 'Sydney Mail'. 26 Up (Sydney Mail) and 37 Down (Brisbane Mail) were the premier service of the era." For more detailed information check out https://environment.ehp.qld.gov.au/heritage-register/detail/?id=601242.
The sign installed by Southern Downs Regional Council records that "Tension between the colonies of Queensland and New South Wales contributed to the landmark break of gauge at this station in 1887. The governments were unable to agree on a standard gauge so Queensland built a 3' 6" gauge and NSW with a 4'8" gauge. The Queensland side has a bull nose roof and the NSW side has a flat skillion roof."
There is a museum located in the old Station Master's Office which has railway memorabilia, photographs, newspaper cuttings and information about this unique railway station. It also has a cafe which opens from 9.00 am - 3.00 pm Monday to Friday and 8.00 am - 4.00 pm Saturday and Sunday. There are also train trips available. Check out https://visitdarlingdowns.com.au/listing/wallangarra-railway-museum. Tel: (07) 4684 3376.

Girraween National Park
Girraween National Park is located to the east and north east of Wallangarra. It is 18 km north of Wallangarra on the New England Highway. Turn east at Pyramids Road. The park is known for its spectacular wildflower displays (Girraween is an Aboriginal word meaning "place of flowers") as well as its impressive granite outcrops which include angular tors and boulders which appear to be precariously balanced. The website https://www.npsr.qld.gov.au/parks/girraween includes a detailed and downloadable map (https://www.npsr.qld.gov.au/parks/girraween/pdf/girraween-map.pdf) which has details of ten bushwalks in the park including the Bald Rock Creek circuit and Wyberba walks. The excellent Girraween and Sundown National Parks brochure (downloadable at https://www.npsr.qld.gov.au/parks/girraween/pdf/girraween-dg.pdf) proudly points out that the visitor can have a range of experiences "From easy Wyberba walk to a challenging full day hike to Mount Norman and back, it takes more than a couple of days to explore Girraween’s 11 800 hectares of rock-strewn ridges, cascading creeks and fascinating forests ... Thrill at seeing The Pyramid or hiking up it for the first time. Stand in awe under Granite Arch. Delight in discovery along the creek or between boulders on the Bald Rock Creek circuit or The Junction track, where enticing rockpools beckon you to dip in your toes or watch reflections in still, chilly waters. Simply disappear! Underground Creek will amaze as water mysteriously vanishes and then resurfaces to continue its journey downstream to Dr Roberts Waterhole. Get your blood pumping on a longer hike to imposing Castle Rock, The Sphinx or Turtle Rock, where you’ll gaze over rugged scenery formed by molten rock that has been uplifted, exposed and eroded by water, wind and ice. Be transported into Girraween’s remote ‘back country’ when you visit Mount Norman day-use area, cycle or walk shared trails, or take on the challenge of an overnight hike."

* Prior to the arrival of Europeans the area was occupied by Bundjalung Aboriginal people.

* The district was first occupied in the 1840s by graziers who arrived and settled the rich Darling Downs.

* In 1865 the border tree was marked by Surveyor Roberts.

* In 1885 it was officially gazetted as a border town and 179 lots were offered for sale. Customs excise officers were immediately relocated from Tenterfield and Stanthorpe to a purpose-built customs house where duties were imposed upon those crossing the border.

* By 1886 a local Catholic church had been consecrated.

* In 1930 the Queensland and NSW railways were standardised meaning that passengers no longer had to change trains at the border.

* In 1938 a major abattoir was established in the town.

* During World War II the town was used as an army store and munitions dump.

* Passenger services on the railway through Wallangarra stopped in 1972.

* In the winter of 1984 the temperature dropped and never rose above 2.4°C all day - the coldest day recorded in Queensland.

* All scheduled railway services to the town stopped in 1997.

There is no Visitor Information Centre in the town but the people at the Railway Cafe can help.

The University of Queensland has a detailed history of the town at http://queenslandplaces.com.au/wallangarra. The official site can be accessed at http://www.southernqueenslandcountry.com.au/destinations/wallangarra. 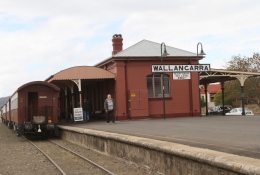 The railway station with its Queensland and NSW roofs 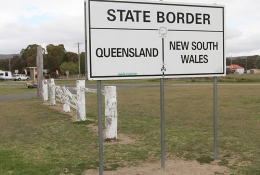 The border fence between NSW and Queensland 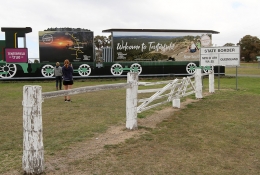 The border between NSW and Queensland symbolised by a fence 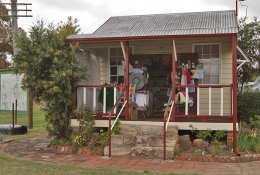 The craft shop is located right on the border