I was in Mariehamn on the Aland Islands - a group of islands in the Baltic Sea between Sweden and Finland - when I fell in love with the romance of Wallaroo. I had a few hours to fill before the ferry arrived and so I went onto the clipper ship, the Pommern, which is now a maritime museum moored in the harbour near the ferry terminal. It is beautifully preserved and there are television sets around the ship where 'old salts' tell of their time on the ship. On one of the screens an ancient mariner, looking a little disconsolate, told of how "I met a girl at a dance in Wallaroo" ... Wallaroo in South Australia! ... how? why? "When I went back [he failed to mention that it would have been a year later] I went to another dance but she wasn't there." Wallaroo was one of the great grain ports on the Yorke Peninsula. It was from here, in 1949, that the last of the sailing ships headed out to run the Roaring Forties, round Cape Horn and take their cargo across the Atlantic to Europe. As the sailors waited for the windjammers to be loaded the locals would entertain them - there were dances on Saturday nights and often the sailors would be invited home for meals. Today Wallaroo is a small town with an exceptional maritime museum, a port where you can catch a ferry twice daily to cross the Spencer Gulf to the Eyre Peninsula, and you can marvel at the huge grain silos which still load ships although what it took six weeks to do in 1949 can now be done in two hours.

Wallaroo is located at the north-western end of the Yorke Peninsula 159 km from Adelaide on the Spencer Gulf. The town is 13 m above sea level.

In 1857 an early settler in the area, Walter Watson Hughes, named his property Walla Waroo. It is said that the name came from the Narangga Aboriginal words 'wadla waru'  which some sources say meant 'wallaby piss'. The town would have remained  Walla Waroo but it was too long to be stencilled onto wool bales and consequently someone shortened it to Wallaroo.

Heritage Trail and Historic Walk
The best way to explore all of Wallaroo's historic buildings is to start at the Old Post Office, now the Heritage and Nautical Museum, and get a copy of An Historical Walk Around Wallaroo which lists 17 places of interest in the town of which the most important are:

The Old Post Office
The elegant Old Post Office was built out of limestone in 1865. It operated as a Post Office from 1865-1910 and then became the Divisional Headquarters of the Yorke Peninsula Police Department until 1975 when it was donated to the National Trust. Today it is the National Trust Wallaroo Heritage and Nautical Museum. It is a celebration of both the area's maritime history and copper smelting. As recently as 1949 windjammers were still sailing into Spencer Gulf, mooring offshore and being loaded with 180-lb (80kg) bags of wheat before heading south to the Roaring Forties, rounding Cape Horn and making their way to the markets of Europe. They are now a distant memory. The Wallaroo Heritage and Nautical Museum has one of the finest collections of “ships in bottles” (over 70 examples of this strange maritime craft) anywhere in the world. They were obviously something meticulous (and bored) sailors constructed to pass the time while waiting up to three months for the wheat to be loaded. The memorabilia is extensive and interesting. This is easy to understand when it is realised that 42 ships were wrecked off the Yorke Peninsula coast between 1865-1933. The Museum is open Monday to Sunday 10.00 am - 4.00 pm. Tel: (08) 8823 3015. Check out http://www.nationaltrust.org.au/sa/wallaroo-heritage-and-nautical-museum.

Hughes Chimney
The Hughes Chimney is the last reminder of the importance of copper smelting to Wallaroo and a powerful symbol of the hugely important Wallaroo Mining and Smelting Company. The inscription "WWH 1861" commemorates the founder of the company (and the man who named the town) Walter Watson Hughes. The chimney was built from 300,000 bricks and stands 36.5 metres high. It is located near the Wallaroo ferry terminal.

The Jetty
Today the jetty is nearly a kilometre long. It stretches out into Spencer Gulf and Wallaroo is now one of the few deep water ports around the Yorke Peninsula (Port Giles is the other one). The jetty is central to the history of the town. The first jetty was built in 1862 to ship copper which was being mined in the hinterland. It was also used to ship wool and to bring general cargo to the town. In 1879 the jetty was expanded so it could handle six vessels at one time. Not surprisingly the improvement in the jetty meant that the port increased in importance with large numbers of ships waited offshore to load ingots of copper and bags of wheat. A second jetty was built in 1880. It operated until 1927 when another jetty was constructed to hold the railway line. It remains in operation and is 863 metres long. It was altered so it could be a part of the bulk grain loading facility in 1958 and was opened to anglers in 1971. In recent times an entrance channel has been dredged allowing the berthing of large bulk carriers.

Sailing across Spencer Gulf
There would probably be a good business in establishing a clipper ship in the area and sailing around the Yorke Peninsula and exploring both the Spencer Gulf and the Gulf St Vincent. In the absence of such an appealing tourist attraction the next best thing is to travel in comfort across Spencer Gulf to Lucky Bay (near Cowell) on the Sea SA car and passenger ferry. It is a simple trip (unless the weather is bad) where just as you watch the Yorke Peninsula coast disappearing at the back of the vessel (the stern) the Eyre Peninsula coast comes into view at the front of the vessel (the bow). Not the same as clambering up a mast in a Force 9 gale but, hey, that is the modern world for you. Check out http://www.seasa.com.au for the timetable and prices. Tel: (08) 8823 0777. It is also a popular shortcut across Spencer Gulf for vehicles travelling from Adelaide to Port Lincoln.

* Matthew Flinders sailed along the coast past the present site of  Wallaroo on 15 March, 1802 and observed that "the immediate coast ... which extends several leagues to the north of the point, is low and sandy, but a few miles back it rises to a level land of moderate elevation, and is not ill-clothed with small trees." Shortly afterwards the French explorer, Nicholas Baudin, sailed past where Wallaroo stands today.

* Robert Miller, who took up 104 square miles (269 square kilometres) of land near Wallaroo in 1851, became the first European to settle in the area.

* Miller was followed in 1854 by  Walter Watson Hughes who started shipping wool out by small boats.

* Two of Hughes' shepherds changed the future of the peninsula in 1857 when they discovered copper. James Boor found copper in 1859 at Wallaroo and Patrick Ryan found it at Moonta in 1861.

* By 1861 the town had been officially named Wallaroo and the port became known as Wallaroo Bay. The town was formally proclaimed in 1862.

* From 1861 until 1923 Wallaroo was the largest and most important port on Spencer Gulf.

* A horse-drawn tramway from Kadina to Wallaroo was established in 1862 and a similar tramway opened from Moonta in 1866. Both brought copper to the smelters in the town.

* A jetty was constructed at Wallaroo in 1861. It was the end point for a tramway which brought copper to the port from the Kadina mine. Not only did the ships take copper from the port but they brought foodstuffs, timber, coal and mining equipment to the port.

* The first copper smelter in Wallaroo was lit in late 1861 and refined copper was shipped from the port in early 1862.

* By 1868 over 100 tonnes of copper was being produced by the smelters around the town. Over 200 people were working at the smelters.

* Between the 1890s and 1920s Wallaroo was forced to diversify as the price for copper dropped. At various times it smelted gold and lead, produced lead strips, distilled sulphuric acid and manufactured superphosphate.

* in 1931 the barque Herzogin Cecilie sailed from Wallaroo to Falmouth on the English coast in a record-breaking 93 days.

* In December, 1943 it was announced that, as part of the war effort, Wallaroo would be the location of a power alcohol distillery which would produce 3-4 million gallons (13.6-18.2 million) of alcohol from 1.25 million bushels of wheat. The alcohol would be used to improve the octane rating of petrol and was essential to munitions manufacture.

* Today Wallaroo is an active deep sea port with important the grain handling facilities. It is also a holiday town and a seaside resort.

The volunteers at the Wallaroo Heritage and Nautical Museum, Jetty Road, Wallaroo, tel: (08) 8823 3015 are helpful with local information as are the people at the Moonta Tourist Office, Blanche Terrace, Moonta, tel: (08) 8825 1891.

There is a good local website with information about the area. Check out http://www.wallaroocommunity.org 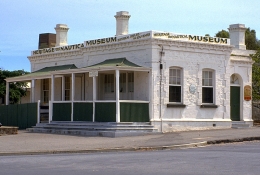 The Wallaroo Heritage and Nautical Museum (1865) on the corner of Jetty Road and Emu Street. 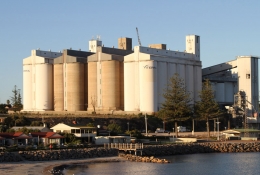 The Viterra wheat silos in the late afternoon sun at Wallaroo 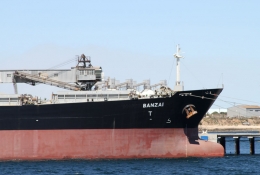 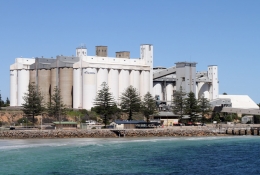