Town that came into existence to service the Wallerawang Power Station.

Wallerawang is a purpose-built town which came into existence in the 1950s when the Wallerawang Power Station was being constructed. It opened in 1957. The town is located beyond Lithgow on the western edge of the Blue Mountains and, since the power station closed in 2015, it has been notable for the popular Lake Wallace (a pleasant recreation area which was created to provide water for the power station) and the historic St John's Church, built on a design by the great colonial architect, Edmund Blacket.

Wallerawang, on the western edge of the Blue Mountains, is located 152 km north-west of Sydney via the Great Western Highway and 900 m above sea-level.

'Wallerawang' is a Wiradjuri word which is said to mean "place near wood and water" or "plenty of water".

Lake Wallace
Lake Wallace, which is only a ten minute walk from Wallerawang shopping centre, is an artificial lake which was created to provide cooling water for the Wallerawang Power Station. Today it offers recreational opportunities including fishing, sailing, trout fishing and canoeing and there are camping, picnic, barbecue and childrens' play facilities. Birdlife is abundant, in particular black swans and white-faced herons. Check out https://tourism.lithgow.com/lake-wallace/ for details.

St John the Evangelist Church
St John The Evangelist Church in the Main Street is a stone building designed by Edmund Blacket and built between 1880-1881 at the behest of Georgina Lyons Barton. It is a memorial to her parents, James and Robina Walker. The Barton family owned the old Wallerawang estate which was then known as Barton Park. The Heritage Council of New South Wales notes: "this church was used by Presbyterian and Anglican denominations and was given to both on 18th November 1952. St John the Evangelist Church contains numerous significant moveable objects and artefacts (eg main alter, pews, reader's lectern, baptismal font and other associated furnishings, tables and chairs) that were purpose-built for the Church." It was heritage listed in 2004. Check out http://www.environment.nsw.gov.au/heritageapp/visit/ViewAttractionDetail.aspx?ID=5053347.

The History of Wallerawang Power Station
The change in the nature of power generation has seen the Wallerawang Power Station, once the main employer in the area, closed and dismantled since 2014-2015.
The power station played an important role in the development of the western coalfields of NSW for over 40 years. Since it began to operate in 1957 (construction began in 1951) it was also important in furnishing power for the railways. It had a total capacity of 1000 megawatts, producing electricity by means of coal-fired boilers and steam-driven turbo-generators. Lacking the salt water available for cooling at coastal power stations, Wallerawang used a system of cooling towers with water supplied from Lake Wallace and Lake Lyell.
Over 75 per cent of the power station's coal was provided by the nearby Angus Place colliery with the remainder supplied by local privately owned mines. The coal was taken by conveyor to the power station's pulverising mills, where it is crushed to a fine powder before being burnt in the furnace. At its peak, up to 2.2 million tonnes of coal were consumed each year.

* Prior to the arrival of Europeans the area around Wallerawang was home to the Wiradjuri and/or the Wywandy Aborigines.

* The first European in the immediate vicinity was James Blackman who established the road from Bathurst to Wallerawang in 1820.

* The 'Wallerawong' station was taken up by James Walker in 1824.

* In the late 1820s Wallerawang became a major stopover for those headed between Sydney and the farming areas beyond Mudgee.

* Two of James Walker's convict servants took up land in the district in the 1850s.

* The railway reached Lithgow in 1869 and Wallerawang in 1870 which enabled the closer settlement of the valley.

* Until the line to Bathurst was completed in 1876 all passengers alighted at Wallerawang and joined a Cobb & Co. coach for the journey west to Bathurst or north to Mudgee.

* St John's Church of England was erected by 1881 to a design by Edmund Blacket, at the behest of James Walker's daughter.

* In 1942 Wallerawang became an inland fuel depot for the RAAF.

* Around 1950 new town plans were drawn up for Wallerawang, which was planned as a coal centre for the railway line.

* By the mid-1980s, automation, computerisation and rationalisation have resulted in significant job losses from both the power station and the local collieries.

* The railway to the town closed during the early 1990s.

* In 2014 EnergyAustralia announced it would close Wallerawang power station permanently.

Lithgow Tourism has a useful page on Wallerawang. Check out http://tourism.lithgow.com/wallerawang. 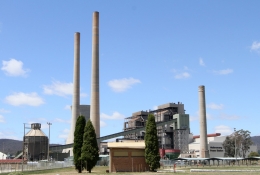 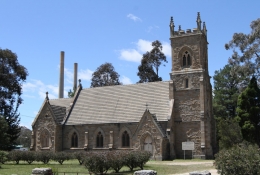 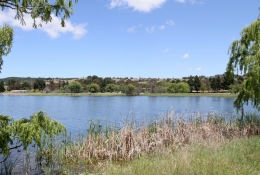 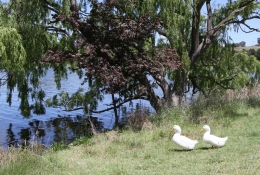