Known locally just as 'Wangi', Wangi Wangi is a quiet holiday and retirement town which is known to a generation of Australians as the home of the famous artist William Dobell.  It is located on a narrow peninsula which juts out from the western shore of the lake, includes the Lake Macquarie State Conservation Area, and is just a short distance from the entrance to the lake at Swansea and Swansea Heads. The primary appeal of the area is Dobell House and the Wangi Point Flora and Fauna Reserve. Beyond that, like all the towns around the lake, it is popular for fishing, swimming, boating, picnics and camping.

Wangi Wangi is located 128 km north of Sydney via the M1 - Pacific Highway. It is 4 m above sea-level.

The area was originally inhabited by the Awabakal Aborigines who, according to an 1826 sketch of the lake, referred to Wangi Point as Wonde Wonde. No one is sure what either "wonde wonde" or "wangi wangi" means but the word "wangi" has been translated as either "water", "night owl" or "dark green tree". The repetition of the word means "many". Thus it is either "a lot of water", "many night owls" or "place of many dark green trees".

Dobell House
In his time the Australian painter Sir William Dobell was one of the country's most famous and most controversial artists. He lived in Wangi Wangi (and made it famous) from the 1940s until his death in 1970. Dobell painted superb landscapes of Lake Macquarie and Wangi Wangi but it was as the recipient of the Archibald Prize that he gained notoriety. He won the famous portraiture prize  in 1943, 1948, and 1959. The 1943 award, given to Dobell's modernist painting of the artist Joshua Smith, became one of the most controversial prizes in Australian art history. It is recounted in considerable detail in the Australian Dictionary of Biography entry on Dobell: He won the 1943 Archibald prize with a portrait of Joshua Smith in January 1944. The morning after the award was announced, Smith's parents pleaded with Dobell to withdraw the portrait from exhibition; Joshua Smith refused to speak to him. Public opinion was vociferous. On 19 February 1944 the A.B.C. Weekly published the transcript of a radio talk by Dobell: 'To me, a sincere artist is not one who makes a faithful attempt to put on canvas what is in front of him, but who tries to create something which is a living thing in itself, regardless of its subject . . . I have been trying to develop a style of my own derived from the Old Masters. The leaders of the so-called ''modern" movements have done the same—although they have developed in different directions'. Two unsuccessful artists, Mary Edwards and Joseph Wolinski, brought an action to overturn the award, claiming that 'Joshua Smith' was 'not a portrait but a caricature'. In the Supreme Court hearing of 23-26 October 1944 their main witness was J. S. MacDonald, who argued that portraiture was a specific genre bound by rules and, like a sonnet, had to subscribe to a correct form: 'it has to be a balanced likeness of an actual person'. The painting 'Joshua Smith', he went on, was not a portrait as it was 'very unbalanced, a caricature', and he added that the word came from 'caricare' which meant 'to overload'.
Dobell argued in defence that he was an artist of sound training, whose experience overseas had been supported by winning the travelling scholarship. Knowing his fellow painter reasonably well, he had a considered concept of his character and body language. Joshua did have long arms, habitually held his hands clasped, and when 'very determined to gain his point' he 'naturally sits in a chair that way'. Dobell was prepared to 'admit a slight exaggeration' in the portrait. On 8 November Justice Roper dismissed the suit against Dobell. Edwards's and Wolinski's appeal also failed. In April 1944 Dobell had been appointed a trustee of the Art Gallery for a four-year term.
Scarified by the court case, by the publicity and by abusive letters from total strangers, Dobell suffered an acute attack of dermatitis, followed by a nervous breakdown; he refused to leave the house, to think, to paint or do anything at all. In 1945 he retreated to Wangi Wangi, on the shores of Lake Macquarie, to live with his sister Alice in the holiday home that had been built by his father." For the full entry see http://adb.anu.edu.au/biography/dobell-sir-william-10025.
Dobell House - it combines his home and his studio - is open on Saturdays, Sundays and public holidays from 1.00 pm - 4.00 pm and by appointment, tel: (02) 4975 4115. There are prints of his work on display, some inspired by the local scenery, as well as original furniture, possessions, memorabilia and photographs. Now owned by the National Trust the building is located at 47 Dobell Drive. For more information check out http://www.dobellhouse.org.au.

Wangi Point - Lake Macquarie State Conservation Area
Wangi Point, previously known as the Flora and Fauna Reserve and now one of the six areas around the lake that are all part of the State Conservation Area, is located on the end of the Wangi Wangi peninsula. It is comprised of 42.3 ha of bushland at Wangi Point, with approximately 2.9 km of lake foreshore. The area is predominantly rainforest remnants and eucalypt stands inhabited by koalas. There are good views of the lake and two walking trails along the lake foreshores and through bushland, native grassland and remnant littoral rainforest. There are four walks depicted on a plaque at the car park. Amusingly called the 'Easy Walk' leads out to a rest area at Wangi Point.  It last 30 minutes. The Botany Track goes out to the Point where there are good views of the lake and takes around 60 minutes. The Circuit Walk takes around 75 minutes and goes around the entire area and the Ridge Track which rises to the Lookout at the centre of the point takes about 45 minutes.

Myuna and Wangi Wangi Bays
On the south-western side of the Wangi Peninsula is Myuna Bay which has a strip of parkland along the lake foreshore. It has good views south-east across Rocky Point at the southern end of the bay and eastwards to Pulbah Island and across to the eastern shore of the lake. Wangi Wangi Bay, on the north-western side of the peninsula and just below Dobell House has a pleasant walking track which runs along the lakeside shore.

* An 1826 map of the area referred to the specific district as Wonde Wonde, presumably words from the Awabakal Aboriginal language group.

* Edward Gostwyck Cory of Paterson became the first European settler when he selected 560 acres here in 1829 but he did little with it. It was formally granted to Cory in 1842.

* From around 1900 until 1916 there was a Chinese market garden near where the Workers Club now stands.

* The development of Wangi Wangi did not occur until 1916 when a Newcastle businessman, D.R. Israel formed the Wangi Wangi Development Company and began to subdivide the area. A 100 feet reserve was placed on the foreshore

* By the 1920s Wangi was a popular holiday resort destination for miners from Cessnock who set up tents along the shoreline in December and January when the mines were closed.

* During the 1920s the road to Wangi Wangi was so bad that most visitors caught the ferry from Toronto.

* The artist William Dobell moved to the area in 1945 after winning the 1943 Archibald Prize.

* In 1948 Dobell won the Wynne Prize for landscape painting with his "Storm Approaching Wangi".

* The Wangi Power Station, a thermal power station, was completed in 1958.

* In 1999 Dobell House was listed on the National Estate.

The Lake Mac Libraries has an excellent history site on Wangi Wangi. Check out https://history.lakemac.com.au/page-local-history.aspx?pid=1085&vid=20&tmpt=narrative&narid=87. 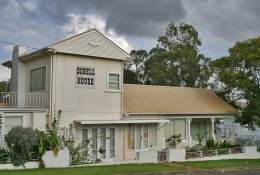 Dobell House, the home of the famous artist William Dobell, at 47 Dobell Drive. 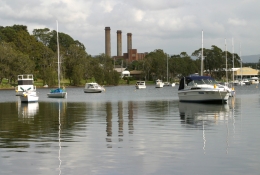 View across Wangi Wangi Bay from below Dobell House. 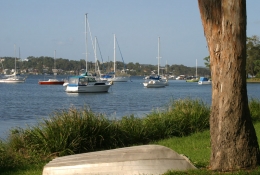 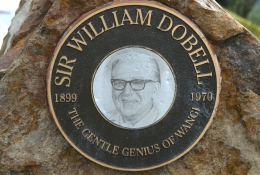 The memorial plaque to William Dobell on the shoreline of Wangi Wangi Bay.