Warmun, once known as Turkey Creek, is a quiet and tiny Aboriginal settlement on the Great Northern Road between Broome and Kununurra. It is now run by the local Warmun community who have constructed a roadhouse, accommodation facilities and an impressive art gallery. The community promote the town as the principal access point to Purnululu National Park and the famous Bungle Bungles.

Warmun is located on the Great Northern Highway 3018 km north-east from Perth, 847 km east of Broome and 197 km south of Kununurra.

Although it was known as Turkey Creek for most of its life, in recent times it has reverted to the Kitja name for the area which is Warmun.

Warmun Art Centre
Warmun has been the home to some of the most admired of Australia's Aboriginal artists, particularly exponents of what has become known as East Kimberley Aboriginal Art. The most famous of all the local artists was Rover Thomas who, while being born in the Great Sandy Desert south of Warmun, moved to Turkey Creek where he developed a unique style of painting. He died in 1998 but his influence remains. Aboriginal Art Online (see http://www.aboriginalartonline.com/regions/warmun.php) has a detailed explanation of how the area developed to be so important: "Art at Warmun evolved in the late 1970s from the painted boards used in the Gija people's Krill Krill song-dance cycle. The Krill Krill ceremony was revealed to Rover Thomas after the death of a woman to whom he was spiritually related in 1974. About a month after her death, Rover Thomas was visited by her spirit and she gave him a series of songs and dances about her travels after her death, visiting many sites of sacred or historical importance in the Kimberley.
"After several years of his telling these stories, they evolved into a song and dance ceremony called Krill Krill performed by the Warmun community. This ceremony included the carrying of painted boards by dancers. These boards initially were painted by Thomas's uncle Paddy Jaminji, under Rover Thomas' instructions, and only several years later did Rover Thomas take up painting independently himself. These paintings led to the remarkable growth of the east Kimberley style of painting." The rest of the article is well worth reading. The centre, on the Great Northern Highway, is open from 9.00 am - 4.00 pm, tel: (08) 9168 7496. Check out http://warmunart.com.au/home. Note that a permit is required to enter the Warmun community, tel: (08) 9168 7496.

Bungle Bungles
If they weren't so inaccessible the Bungle Bungles would be one of Australia's premier tourist attractions. They are a collection of unique formations which were produced by the layering of deposits which were laid down in the area 350 million years ago. They have never been aggressively promoted as a tourist attraction which is why, over the past three decades, the difficult 4WD-only road to the site has never been upgraded. The perfect way to see them is to travel across the entire formation via aeroplane and then explore at least one of the gorges at ground level. There is more detailed information at https://www.aussietowns.com.au/town/bungle-bungles-wa.

Getting there
Known to the local Kitja Aborigines as Purnululu, the turnoff to the Bungle Bungles are located 54 km south-west off the Great Northern Highway. The road is so bad that one source has described the route as: "The distance from the highway ... is only 55 km, however, the trip will take two or three hours and the track is suitable only for 4WDs with good clearance. Caravans will not survive the trip."

The Geology of the Bungle Bungles
The Bungle Bungles are notable for their distinctive beehive-shaped towers. These towers, which were formed between 350-375 million years ago, are the result of sedimentary layers of pebbles, boulders, conglomerates and sandstone all being laid down in the Ord Basin. The strange horizontal banding is layers of cynobacterial crust - black lichen and orange silica. Over millions of years the layers were eroded by a combination of wind from the Tanami Desert and rainfall. Some layers were stronger than others and so, as erosion occurred, weathering produced the beehive or bell-like shapes. Fault lines in the horizontal bedding resulted in huge gullies and caves. The sandstone is so fine that it crumbles when touched. The area is a wonderland of Aboriginal art, huge gullies and dramatic caves

Walks in the Bungle Bungles
Piccaninny Creek and Gorge
There are two options here. Either a 7 km moderate return walk to the entrance of the gorge or a 30 km return walk which goes through the gorge but cannot be done in a day. There is no marked track. The Western Australian Parks and Wildlife site describes the walks in the following terms: "The 7 km return walk to the gorge entrance (the Elbow) takes a full day. To explore the entire gorge system, a total of more than 30 km, hikers need to camp for at least a night. The track is moderately easy up to the gorge entrance.  It then becomes moderately difficult in the gorge itself, with hikers having to negotiate around fallen boulders, loose rocks and along creek beds." For more information check out http://parks.dpaw.wa.gov.au/site/piccaninny-creek. The easiest option is to go to Picanninny Creek Lookout which is only 1.4 km from the car park and provides excellent views over the Bungle Bungle Range.

Cathedral Gorge Walk
There is a relatively short and easy 3 km return walk (it will take around 1-2 hours) from the Picanninny Creek Car Park to the dramatically beautiful Cathedral Gorge. For more information check out http://parks.dpaw.wa.gov.au/site/piccaninny-creek.

The Beehive Domes Walk
The easiest of all the walks in the park is this hour long circuit around some of the park's famous beehive domes. For more information check out http://parks.dpaw.wa.gov.au/site/piccaninny-creek.

Echidna Chasm
The Echidna Chasm Walk is a relatively short, 2 km, one or two hour walk through a narrow chasm which is 200 m deep and famed for its Livistonia palms and impressive boulders which are made from the local region's distinctive conglomerate of rocks and sandstone. It is located 19 km north of the visitor centre. From the Echidna Chasm Car Park it is possible to walk to Osmond Lookout with its views across the Osmond Range.

* Geologically the Bungle Bungles date to around 350-375 million years ago when the sediments were laid down in the Ord Basin.

* Prior to the arrival of European pastoralists and explorers the area around Warmun was sacred to the Kitja people.

* The area around Warmun was first settled by Patrick (Patsy) Durack in 1882. In the early 1880s Durack, hearing good reports of the grazing potential of the Kimberley country, sent his brother Michael to inspect land on the Ord River. On the basis of a favourable report Durack famously took 7,250 breeding cattle and 200 horses from Western Queensland. The 3,000 mile (4,828 km) three year long trek to stock the Argyle and Ivanhoe stations was, at the time, the longest ever attempted in Australia.

* In the early years of white settlement of the Kimberley, massacres of Kitja people were commonplace and they retreated to the Bungle Bungles.

* Between 1880-1900 poisoning of the Kitja people by pastoralists was commonplace in the area.

* In 1901 a ration depot was established at Turkey Creek (now Warmun) to try and stop the poisoning of the indigenous community.

* In 1910 Moola Bulla was opened as an attempt at assimilation but the local community resisted.

* In 1926 Munja pastoral station was purchased specifically, as AO Neville, the Chief Protector of Aborigines, was to claim for: "the purpose of establishing the stations was to pacify the natives and accustom them to white man's ways and thus enable further settlement".

* In the 1970s the Warmun community was established by the local people at Turkey Creek.

* In 1998 the Warmun Art Centre was opened. It was located in the original Turkey Creek Post Office.

* The Purnululu National Park was declared a World Heritage site in 2003.

* In 2007 a new architect-designed gallery was opened. 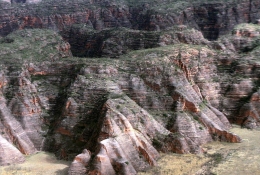 An aerial view of the beehive formations and horizontal bedding which characterise the Bungle Bungles. 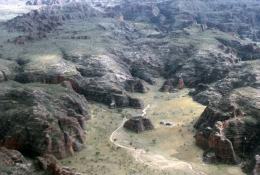 The road into the Bungle Bungles. 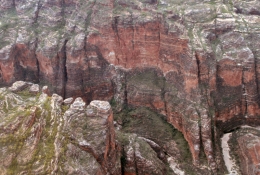 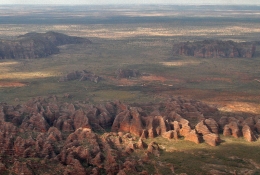 Late afternoon sun catches the magic of the beehive formations. 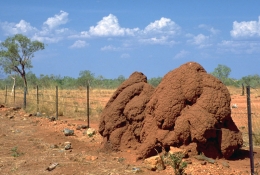 A giant termite mound that has grown over a fence near Turkey Creek.