In recent times, with the addition of sculptures and named pavers on the main street and the beautification of the town centre, Warracknabeal, on the banks of Yarriambiack Creek in the heart of Victoria's wheat-belt, has become an attractive showplace in western Victoria. The district's recent diversification has led to the cultivation of peas, canola, lupins and beans as well, of course, as wheat and barley - the core of the town's enduring prosperity.

Warracknabeal is located on the banks of Yarriambiack Creek 343 km north-west of Melbourne via Donald and the Wimmera Highway and 341 km via Ballarat and Avoca. It is 113 m above sea-level.

Most sources agree that the name is a term used by the local Wotjobaluk Aborigines to describe the huge river redgums that line the banks of the Yarriambiack Creek.

The Sculptures
The main street of Warracknabeal is an excellent example of community commitment to improving a town centre's streetscape with Federation Place as the centrepiece. Over 1700 named pavers - purchased by both past and present citizens as well as local businesses - have been laid and two sculptures, both commissioned from Yarraville sculptor Grant Finck, have been installed in the two central roundabouts. The plaque records: "The centrepiece represents the coming of the first settlers when, in November 1845 the Scott Brothers arrived with their flock of sheep and established 'Werrecknabeal' station on the banks of the Yarriambiack Creek. Since first settlement, the sheep industry has provided income for the community and prosperity for the town. The sheep and the dog pay tribute to the vision of our pioneers in developing the Wimmera and the Mallee."

Historic Buildings
There are a number of impressive buildings in the town's main street. The most impressive is the Tudor-style post office (1907) with its unusual arched entranceway.

Another building of interest is the old State Savings Bank building (1909) which features some fine polychrome brickwork. The building was completed in stages with the ground floor being constructed in 1909, the second storey (which was the manager's residence) in 1921 and the whole building being handed over to Warracknabeal Historical Society in 1969. It is open from 2.00pm to 4.00pm every day except Saturday, tel: (03) 5398 2371.

The main street has a number of interesting hotels. On the other side of the street from the Post Office, which is located on one corner of the impressive Federation Place at the centre of the town, is the very unusual Palace Hotel with its ornate concrete formwork balcony and embossed and embellished name on the upper floor. Then there is the Warracknabeal Hotel (1891) with its arched entranceway, cast iron lacework and art nouveau leaded glass and the Commercial Hotel (1870) with its fine cast-iron lacework.

Log Lock-Up
Here is a genuine local eccentricity. Built in 1872 when the first policeman arrived in the district this simple construction which was used mainly for minor offenders (good for settling the drunk and disorderly down overnight) it remained in use until as recently as 1965. It is located in Devereux Street.

Agricultural Machinery Museum
Located at the southern end of the town, the Wheatlands Agricultural Machinery Museum, is a vast wonderland for agricultural machinery enthusiasts particularly those interested in tractors, harvesting equipment, engines and forms of transportation. It is spread over 16ha and includes such genuine rarities as the log-fired blacksmith's furnace which was used by Hugh McKay to build the first horse-drawn stripper-harvester. There are impressive collections of tractors and even a steam-driven chaff cutter. The museum is open daily from 10.00 a.m. to 5.00 p.m. daily., tel: (03) 5398 1616. See http://www.warracknabealhistory.org.au/Attractions/wheatlands_ag_museum.html for more details.

Yarriambiack Creek Walk
There is a very pleasant 6.8km (2 hour) walk along the Yarriambiack Creek which includes such wonders as the Half Moon Bridge, a lagoon boardwalk, Shag Island and two Chinese Gardens. The creek is a magnet for a rich variety of local birds and the gums along the banks give it a particularly peacefulness.

Rabbit Fence
Today it is nothing more than a monument beside the road but 27 km north of town along the highway is a reminder of the chaos and damage caused by the great rabbit plague of the 1870s and 1880s. A small section of the fence has been restored as a reminder that in 1883 the fence stretched from the South Australian border to Swan Hill on the Murray and was recognised as the longest wire-netting fence in the world.

Sheep Hills Silos
Located 18 km south-east of Warracknabeal is the tiny settlement of Sheep Hills where, as part of an ongoing street art project, the artist known as Adnate has painted huge images of local Aborigines on the disused local wheat silos. It is a companion piece to the silos in Brim (see https://www.aussietowns.com.au/town/beulah-vic) and features four local Aboriginal faces including Wergaia man Uncle Ron Marks and Wotjaboluk woman Aunty Regina Hood.

* Before the arrival of Europeans the district was occupied by the Wotjobaluk Aboriginal group.

* The first European in the area was Major Thomas Mitchell in 1836 who declared it was "ready for the immediate reception of civilized man and destined perhaps to become a portion of a great empire".

*The first squatters to arriver were Robert and Andrew Scott who established a substantial grazing run (estimated to be 100,000 acres) on the Yarriambiack Creek in 1845.

* By the 1860s a settlement, comprising nothing more than a house and a store had grown up on the banks of the creek and by 1870 the Commercial Hotel was operating.

* In 1872 a policeman arrived in the district and in that same year he built a log lock-up.

* The district was affected very badly by the great rabbit plague of the 1870s and this resulted in a vast fence being built from the South Australian border to Swan Hill in 1883. See Other attractions in the region.

* The railway arrived in 1885 and this resulted, in 1886, in the construction of a tower to provide the steam trains with water.

* In December, 1943 it was announced that, as part of the war effort, Warracknabeal would be the location of a power alcohol distillery which would produce 3-4 million gallons (13.6-18.2 million) of alcohol from 1.25 million bushels of wheat. The alcohol would be used to improve the octane rating of petrol and was essential to munitions manufacture. 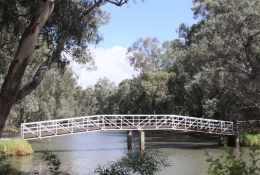 The footbridge over Yarriambiack Creek at Warracknabeal. 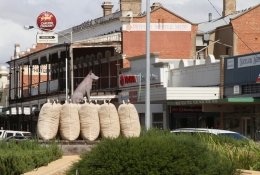 The sculpture of the sheep dog and bales of wheat in the main street of Warracknabeal. 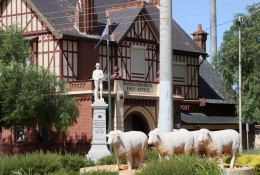 The sculpture of the sheep dog and sheep in Federation Place in the main street of Warracknabeal. 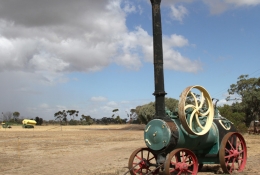 An old tractor outside the Agricultural Machinery Museum. 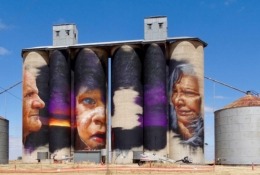 The silos at Sheep Hills by street artist, Adnate.