Rural service centre known as the Dairy Capital of Victoria

Warragul has become the economic hub - a vital rural service centre - of West Gippsland. It is at the heart of rich dairy area and consequently supplies both Melbourne and substantial sections of the country with fresh milk. The surrounding area, known for its green hills and lush pastures, is mixed farming with beef and dairy cattle, apples, potatoes, flowers, poultry and eggs all being part of the agricultural mix.

Warragul is located 104 km south-east of Melbourne via the Princes Highway. It is 112 metres above sea level.

Court House
The Court House is located at 72 Smith Street. Built in 1886 and classified by the National Trust, it has been converted into a restaurant and bar. For more information about the restaurant and bar check out http://www.courthousewarragul.com.
The Victorian Heritage Register records that it is "A courthouse built in 1886, typical of government architecture of the decade and interesting for its meticulous detailing of brickwork and the use of iron finials and ridge decorations. Last court sat there in December 1989. Reopened as The Courthouse Restaurant in April 1996." For detailed information check out http://vhd.heritagecouncil.vic.gov.au/places/67470/download-report.

Warragul War Memorial
Located on the corner of Victoria and Smith Streets, the Warragul War Memorial "was originally erected in memory of the fallen of World War One. In 1955 the names of those who lost their lives in World War Two were added to the memorial as well as the entrance pillars and flagpoles. A plaque containing the names of those who lost their lives in the Boer War was added in 1999." For more information check out http://monumentaustralia.org.au/themes/conflict/multiple/display/33904-warragul-war-memorial. Of particular interest, as an unusual feature of the memorial, is the list on one side of the memorial which records "Died of Illness", "Died of Wounds" and "Died after Returning" - a memory of the broader tragedy that is war.

Wesley of Warragul
Located in Victoria Street, this distinctive and unusual church (note the spire) was purchased in 2002 by the Warragul Heritage Preservation Association. It had previously been a Methodist Church which became a Uniting Church. Today it is used for music events as well as weddings, funerals, meetings and seminars. The detailed history at https://www.wesleyofwarragul.org.au/history explains: "The Wesley Methodist Church building was built in 1888 to service the spiritual needs of the growing township of Warragul. The brick construction designed by Thomas James Crouch has a low Gothic feel, representative of the ecclesiastical nature of his architecture.  Its most prominent features are the two asymmetrical towers located on the western street front.  The lower tower has a strong French character, its roof having a witch’s hat profile punctuated by lucarnes (dormer windows). The taller tower has a more-simple roof over an open bell loggia with criss-crossed balustrading. Other features of the building include its corner porches, paired lancet, windows with unusual wall vents below, timber roof trusses and ramped floor. The Wesley Church building ... is considered to be one of the finest nineteenth century churches in Gippsland."

Warragul Historical Museum
The Warragul Historical Museum is located at 72 Queen Street in the Old Shire Hall (1892). It is run by volunteers and has a large collection of photographs and objects relating primarily to local history. It is open on the second and fourth Sunday of each month from 2.00 pm - 4.00 pm and every Thursday from 10.00 am - 2.00 pm. tel: 0438 232 105 or check https://warragulhistory.org.au.

Warragul Railway Station
Located at 122 Queen Street, the Warragul Railway Station (1878). The Victorian Heritage Database records the significance of the station: "Warragul Railway Station is historically significant as a demonstration of the expansion of the Victorian Railways network in the late nineteenth century, and of the improvements in the services provided in the early twentieth century. The main station building, which included a station master's residence, separate facilities for ladies and gentlemen, and elaborate refreshment facilities, demonstrates the level of accommodation and catering once provided by the Railways Department for its employees and patrons. The scale of the station and goods buildings reflects the anticipated volume of traffic on the Gippsland line in the early twentieth century.
The Warragul Railway Station building is a fine example of the type known as the 'Korong Vale Style', which was developed to replace inadequate facilities at stations located at important junctions in the state. The station building includes a number of notable features, such as the curved pediment motif above the station entrance (also employed in other departmental designs of the day), the original platform furniture such as the entrance gates and ticket collectors booths, the interior arched metal trusses, the lead light windows, the former refreshment rooms and station master's residence, and the porcelain urinals in the men's toilets. For more detailed information check out http://vhd.heritagecouncil.vic.gov.au/places/1190.

Statue of Lionel Rose
Located in Queen Street Park is a life-size bronze statue of Australian boxer Lionel Rose. It was unveiled in 2010. Rose was the first Aboriginal Australian to win a world boxing title. The former bantamweight world boxing champion was born at Jacksons Track near Warragul and fought many of his early fights in Gippsland. He died in 2011.

Linear Park Arts Discovery Trail
This easy 3.6 km walk along Hazel Creek from Burke Street Park through Rotary Park, Scenic Reserve and into Brooker Park is a community arts project featuring mosaics, murals and painted bollards. For information and a very useful map check out http://www.visitbawbaw.com.au/walking-cycling/warragul-linear-park-arts-discovery-trail. The signage on the trail explains: "The Women's Compass Network welcome you to share in our delight at this beautiful Arts Discovery Trail. Over a number of years, a community of women came together with the aim of enhancing this existing trail with some beautiful artworks, to make it a safe and user friendly  pathway for exercise and leisure for the whole community. The idea was to help individuals come together to learn new skills, develop and share ideas and have fun in a welcoming atmosphere. Initially workshops were held with mosaic artist Maery Gabriel who enabled the group to make twenty mosaic tiles which are now placed along the trail. The next project was to paint a number of bollards - group collaboration and individual artists, school groups, family, disabled groups, and churches all got involved. Finally, 48 bollards were completed in a variety of amazing styles, showing the wider community how art can impact on everyday life, and help engender pride in our surroundings. The third project was to create a Mosaic Compass at the start of the trail in Burke Street which was completed and installed with the help of Maery Gabriel."

Termite Mounds Sculptures
Located in the Rotary Park and sculptured by Don Barrett, the Termite Mounds won the 2013 Jindivick Sculpture Show. At the time of opening Barrett noted "I wanted the Australian theme, I was inspired by the MacDonnell Ranges… and I just felt I had to ... Hopefully they don’t just come along and look at it and say it’s a blob of concrete, there’s a bit more behind it than just a blob of concrete.”

Warragul to Drouin Trail or Two Towns Trail
A pleasant 8 km walking and cycling path which links Warragul and Drouin with interpretative signage. It starts in Rotary Park in Warragul and ends at Civic Park in Drouin. The trail is a mixture of concrete paths, boardwalks, wetlands, vegetation remnants and "views to Camp Hill and the Baw Baw ranges to the north and Mt Worth and the Strzelecki Ranges to the south." There is a very comprehensive website - https://walkingmaps.com.au/walk/54 - which provides information about the 15 places of interest along the way - these include mosaics, the Drouin wetlands, the boardwalk and the indigenous history of the area.

Mount Worth State Park
Located 27 km to the south is Mount Worth State Park, consisting of land recovered after extensive logging and grazing. The ruins of old timber mills and sawdust heaps can still be seen in the park. The mountain itself overlooks the valley to the north and meandering creeks to the south. The Visitor Guide notes of the park's wildlife: "Mount Worth State Park protects a remnant of the forests that once covered the western Strzelecki Ranges. Tall wet forests of Mountain Ash, Mountain Grey Gum and Blackwood grow on the hills and slopes. Soft Treeferns and Rough Treeferns flourish within the sheltered gullies. The cool moist conditions support a number of rare plants including Netted Brake, Slender Treefern and Skirted Treefern.
Birdlife is abundant within the park. Lyrebirds scratch amongst the leaf litter, while forest canopy provides food and nesting areas for the Crimson Rosella, King Parrot, Olive Whistler, Grey Butcherbird, Tawny Frogmouth and the rare Sooty Owl. The park is also home to such animals as the Common Wombat, Swamp Wallaby, Brushtailed Possum, Feathertail Glider, Brown Antechinus and Platypus."

The central attraction of the park are the five excellent bushwalks all starting at the Moonlight Creek Visitor Area.

1. Giant’s Circuit – 1.8 km, 1 hour circuit - it follows the route of an old timber tramway through stands of Mountain Ash and gullies with spectacular stands of ferns. The highlight is the Standing Giant, a huge 300 year old Mountain Ash with a girth of 14 metres.

3. Gardiners Mill – 3 km, 1 hour return - this extends the Giant's Circuit and includes regenerated Mountain Ash and Clark Creek which is lined with ferns.

4. Maslin’s Mill – 1.5 km, 40 minutes return - a track that passes through forests of Blackwood and Mountain Ash to Maslin's Mill. The easiest of all the walks.

5. Waterfall-Bower Circuit - 7 km, 2.5 hours return - a circuit which is challenging and includes a small waterfall at the halfway mark.

The map and Visitor Guide can be downloaded at http://parkweb.vic.gov.au/explore/parks/mount-worth-state-park.

* Prior to the arrival of Europeans the area was home to the Woiwurung Aboriginal people of the GurnaiKurnai language group.

* By 1845 a track had been cut from Melbourne to Gippsland.

* The first settlement in the area occurred in 1867 about 9 km north of Warragul at Brandy Creek, later known as Buln Buln, which was a staging point for coaches on the Old Sale Road.

* The creek was allegedly named after the drink shared by Archibald Campbell and William Pearson beside the stream in 1865.

* Thomas Walton, a landowner from Berwick, bought all of the land between the Bunyip River and Brandy Creek for £45.

* The railway passed south of Brandy Creek in 1878 - that was the year that the township of Warragul was officially established.

* By 1879 Warragul, at the railhead, had four hotels, two general stores, a baker, butchers, blacksmiths, a shoemaker and a pharmacist.

* By the 1880s Warragul was the centre of a thriving timber industry.

* The town's first agricultural show was held in 1885.

* In 1868 a record-breaking earthworm was uncovered at Brandy Creek, though the largest ever accurately measured - 2.19 metres when contracted and over 4 metres when stretched - was found in the area in 1930.

* The great Aboriginal boxer, Lionel Rose, was born here in 1948.

* The town is now a commuter belt for workers in Melbourne and Dandenong.

There is useful information at the Visit Victoria site. Check out http://www.visitvictoria.com/Regions/Gippsland/Destinations/Warragul. 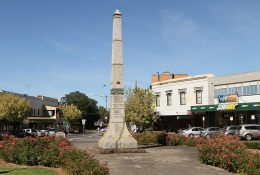 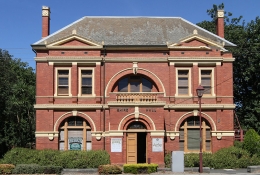 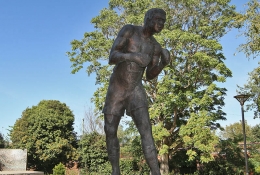 The statue of Lionel Rose in Queens Park 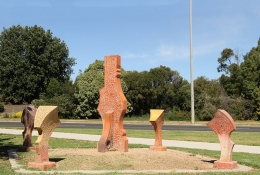 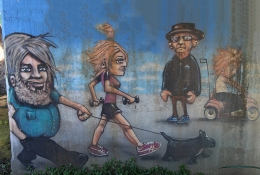 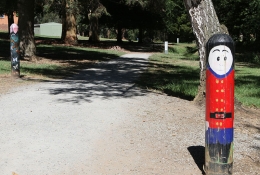