Quiet town on the Macquarie River which promotes itself as the 'Wool and Cotton Capital'.

Warren is a quiet rural town on the Macquarie River. It services an area dominated by sheep and cotton. Merino sheep and the Auscott Cotton Gin dominate the town's economy with wheat, oats, sorghum and maize also being grown. The main attractions in the local area are the excellent Tiger Bay Wetlands which are a magnet for birdwatchers; the remarkable Macquarie Marshes; and the ebb and flow of the area's huge cotton industry.

Warren is located on the Oxley Highway 525 km north-west of Sydney via Mudgee. It is 197 metres above sea-level.

No one is sure how Warren got its name. There is a theory that it is a Ngiyambaa word meaning either "strong" or "substantial". An alternative theory is that it is an English word which meant "game park" and it was a description of the rich pastures and fauna the first settlers found in the area. Certainly it is known that the word Warren was first used when a station with that name was established by Thomas Readford and William Lawson in 1845. The Geographical Names Board of New South Wales notes: "Possibly derived from one of two Ngiyambaa terms: 'waran' for root or 'walan' for hard; also said to have been bestowed on a property from which name was taken with the British meaning ;enclosed place where animals are kept'. (Appleton; 1992)."

Historic Buildings
There is something charmingly old world about the central area of Warren. While there are not a lot of genuinely old buildings (there was a major fire in 1899) the town has an interesting, early 20th century feel to it which is created by some of the buildings in Dubbo Street, Burton Street and Lawson Street. Prominent buildings include the Club House Hotel (1901) and Royal Hotel (1900) which stand opposite each other in Dubbo Street and the terrace houses from 37-41 Lawson Street. The town's Anglican, Presbyterian and Catholic Churches are also in Lawson Street.

Macquarie Park, Oxley Park, Victoria Park and Ebert Park
The town's parks, quiet and cool retreats with good picnic facilities, are located on the banks of the Macquarie River. Macquarie Park has an English-style formal garden and Oxley Park has a monument which honours both John Oxley and Charles Sturt. It reads: "A commemoration of John Oxley, George Evans and party. They camped in this vicinity on the night of 23rd June, 1818. On 27th June they discovered and named Mount Harris, of which this rock was part."
"Charles Sturt, Hamilton Hume and party passed about 1 mile to the north east on or about 18th December, 1828 in their attempt to solve the problem of the supposed inland sea."

Red River Gum Walk
The Red River Gum Walk starts just off Burton Street in Macquarie Park. It follows the riverbank around to a river red gum adjacent the Warren Hole which is reputedly nearly 1,000 years old. Further downstream is the site where stock and wagons crossed on a gravel bar when the water was low. It was used until the first bridge was built in 1875. A small hut, the first European building in the area, was built in 1845 where the Bowling Club now stands. A small police station was built nearby at the same time to protect the new settlers from Aborigines but, as there were no problems, the police moved further west.

Tiger Bay Wetlands
Tiger Bay Wetlands lie to the north of Warren on either side of the Oxley Highway and are a natural overflow of the Macquarie River system. The wetlands are a wonderland of birdlife. They are home to 227 bird species including pelicans and, in season, literally thousands of galahs.

Cotton in the Area
Auscott Cotton Farm and Cotton Gin is located 7 km south-west along the Oxley Highway. It is remarkable during cotton picking time as the paddocks have thousands of huge cotton bales lined up and road trains, laden with the new supersize bales, arrive every few minutes to deposit their loads. It is possible to take a tour of a cotton gin, tel: (02) 6847 4631. During picking time the gins are strictly out of bounds to the casual visitor.

The marshes were first sighted by Europeans when, following the course of the Macquarie River in 1818, John Oxley and his party found that the river disappeared into an 'ocean of reeds'. It was speculated that this was the edge of the legendary inland sea of Australia, but when Charles Sturt arrived in 1828 and explored the river he found the marshes nearly dry.

The Macquarie Marshes Nature Reserve was created in 1971 and currently covers 19,824 hectares.

To see the emus and kangaroos hopping and running through the marshes and reed beds is to feel as though you are participating in a David Attenborough-voiced wildlife documentary. With the sun sparkling off the shallow waters; the reeds and water couch dark green against the surrounding dry plains; and the red river gums edging the deeper streams this is a uniquely Australian wildlife experience.

If you want to fly over the marshes helicopter flights are available from Nyngan. Jack Carter’s Helicopter rides are organised on a private basis, take around an hour and fly over the southern end of the Macquarie Marshes. The rate $650 per hour with the helicopter capable of holding up to four people (that's $162.50 per person if there are four of you). Contact Nyngan Riverside Caravan Park, tel: 0428 322 037.

Fishing and Canoeing
The area is a popular fishing haunt with good locations along the Macquarie River at Oxley Park Wharf, at the Bob Christensen Reserve, the Warren Weir and Brian Egan Weir, and at Quinines Reserve. All these locations are within 5 km of the town. Anglers can expect to catch yellowbelly, carp, cod, black bream and catfish.

Cobb & Co Heritage Trail
The historic inland coaching company, Cobb & Co, celebrated the 150th anniversary of its first journey in 2004. The Heritage Trail now runs between Bathurst and Bourke and, if you are travelling north, you can get an excellent brochure at the Bathurst Visitor Centre and inspect a pristine Cobb & Co coach in the Visitor Centre.

Cobb & Co's origins lay in the need to transport people during goldrushes of the early 1850s. As the Heritage Trail website explains: "The company was enormously successful and had branches or franchises throughout much of Australia, New Zealand, South Africa and Japan. At its peak, Cobb & Co operated along a network of tracks that extended further than those of any other coach system in the world – its coaches travelled 28,000 miles (44,800 km) per week and 6,000 (out of their 30,000) horses were harnessed every day. Cobb & Co created a web of tracks from Normanton on the Gulf of Carpentaria and Port Douglas on the Coral Sea down to the furthest reaches of Victoria and South Australia – in all, a continuous line of 2,000 miles (3,200km) of track over eastern Australia from south to north, with a total of 7000 miles (11,200km) of regular routes." (see www.cobbandco.net.au). Cobb & Co sites around Warren include the Post Office and Willie's Retreat, which features old stables, buildings and the remains of a Cobb & Co Inn.

* Explorer John Oxley camped near the present townsite on 23 June, 1818 during his exploration of the Macquarie River. He noted large numbers of kangaroos and emus in the area.

* Charles Sturt, Hamilton Hume and party passed about 1 mile to the north east of the town on or about 18 December, 1828 in their attempt to solve the problem of the inland sea.

* Settlers were grazing cattle on the plains by the late 1830s.

* The first property in the area was Warren Station which was established in 1845 by Thomas Readford and William Lawson.

* In 1845 a small police station and a hut were built near the river-crossing on the main route from Dubbo. Stockmen camped here before crossing over on the gravel bar when the water was low.

* The town's first store opened in 1866 and a school was established the following year.

* The town's Anglican Church was consecrated in 1873.

* The first bridge across the Macquarie River was opened in 1875.

* Warren was incorporated as a municipality in 1895.

* The railway from Nevertire reached Warren in 1898.

* The great fire of 1899 destroyed two-thirds of Warren.

* In 1955 the town experienced its worst flood during European settlement.

* The district's water shortage was greatly eased when Burrendong Dam was opened in 1967, allowing the development of cotton growing.

* The Tiger Bay Wetlands were officially opened in 1988.

There is a useful local website - http://www.warren.nsw.gov.au/ - which has useful information about the natural attractions around the town. 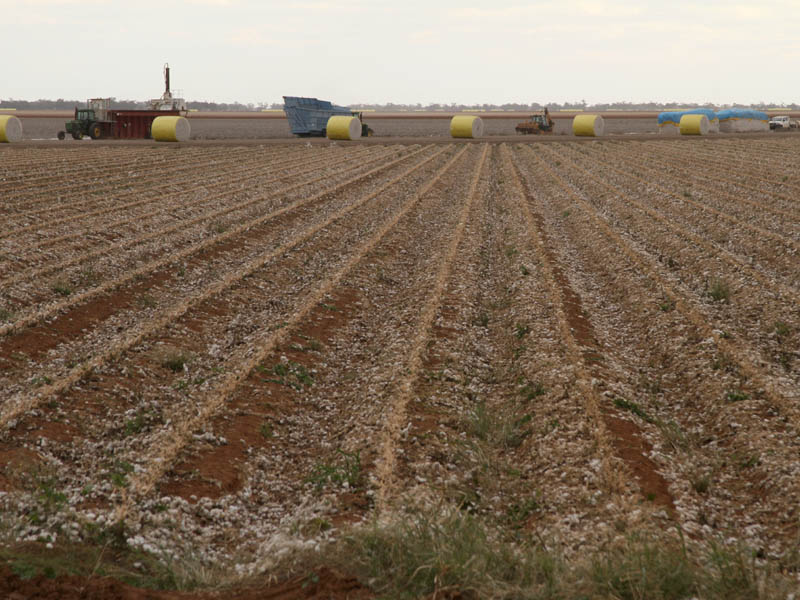 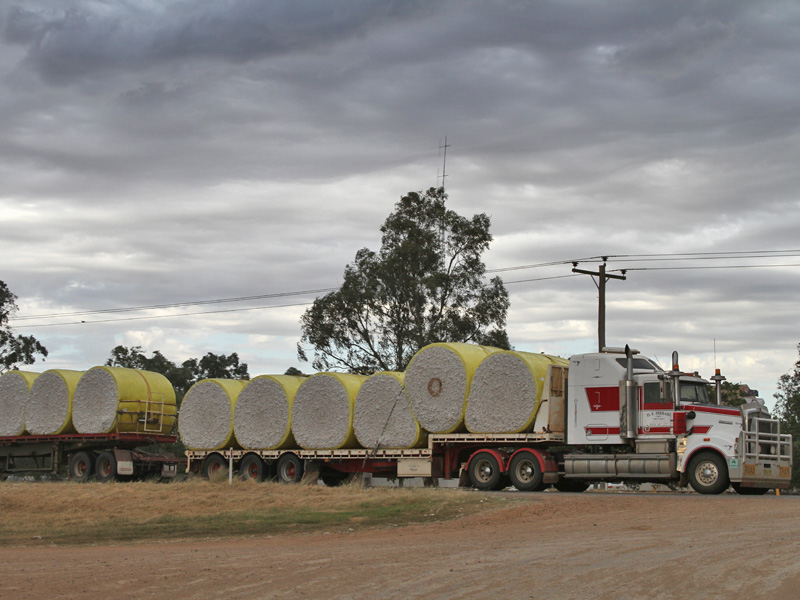 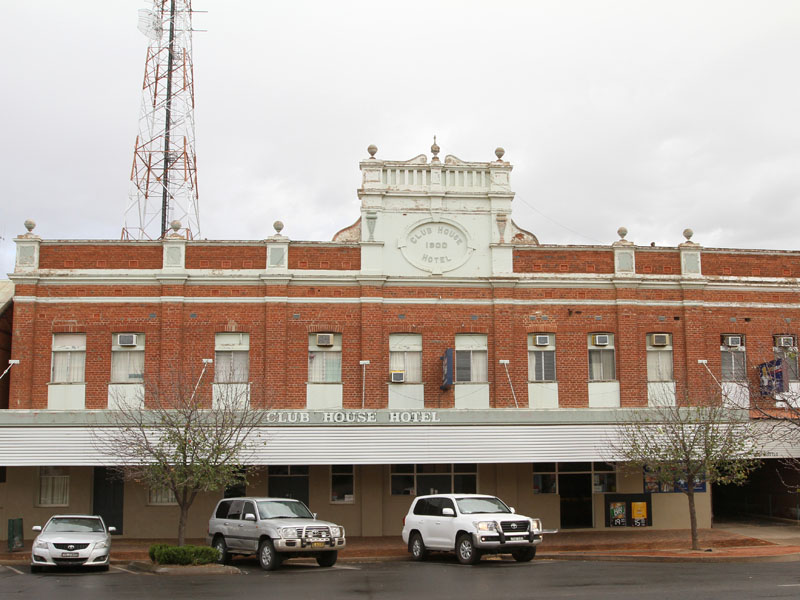 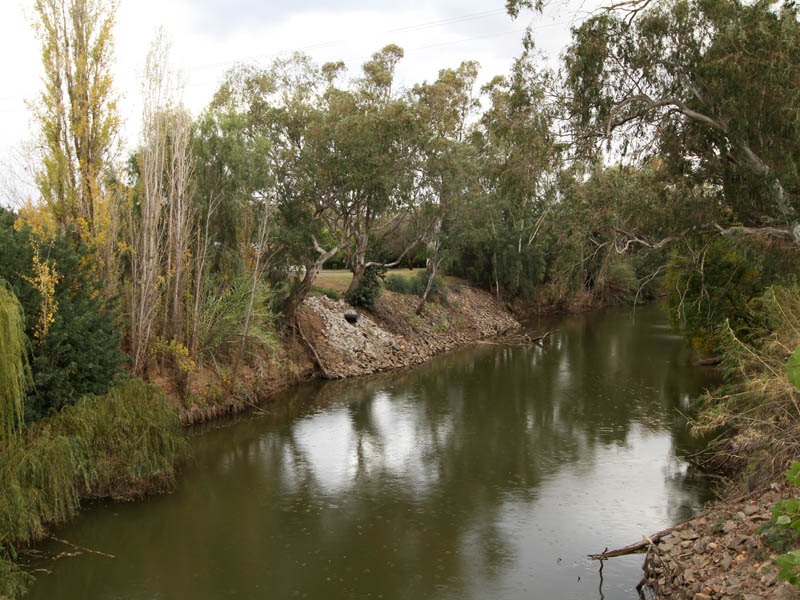 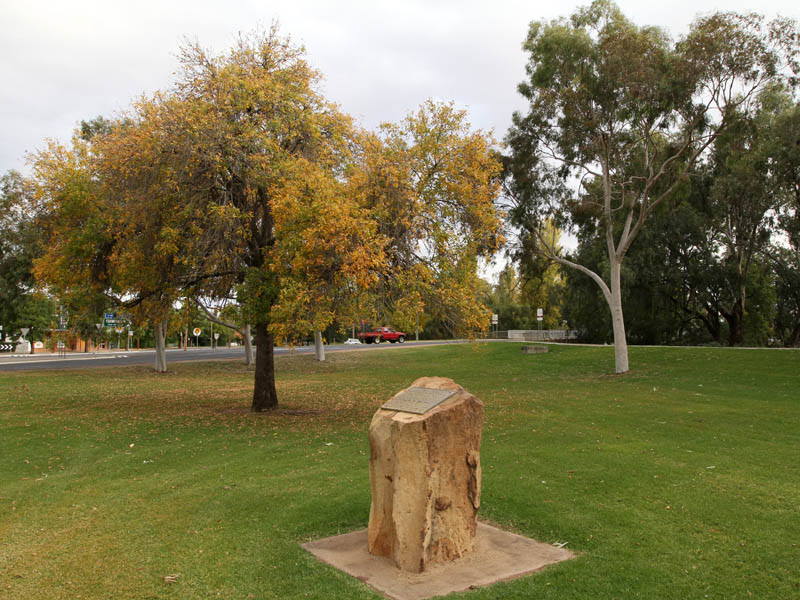 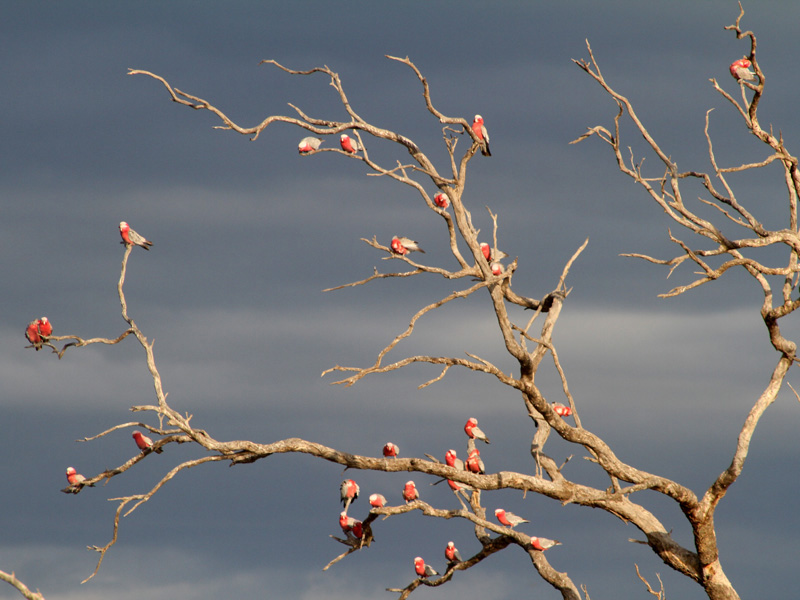 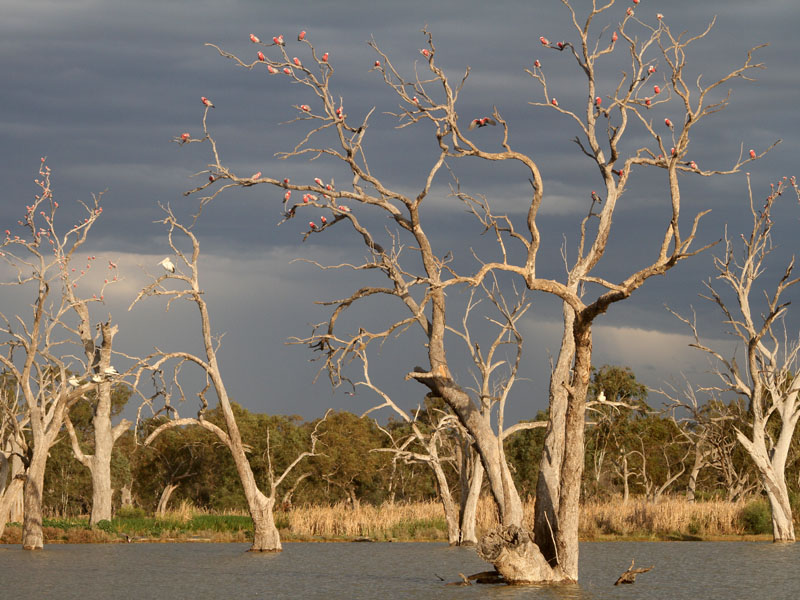 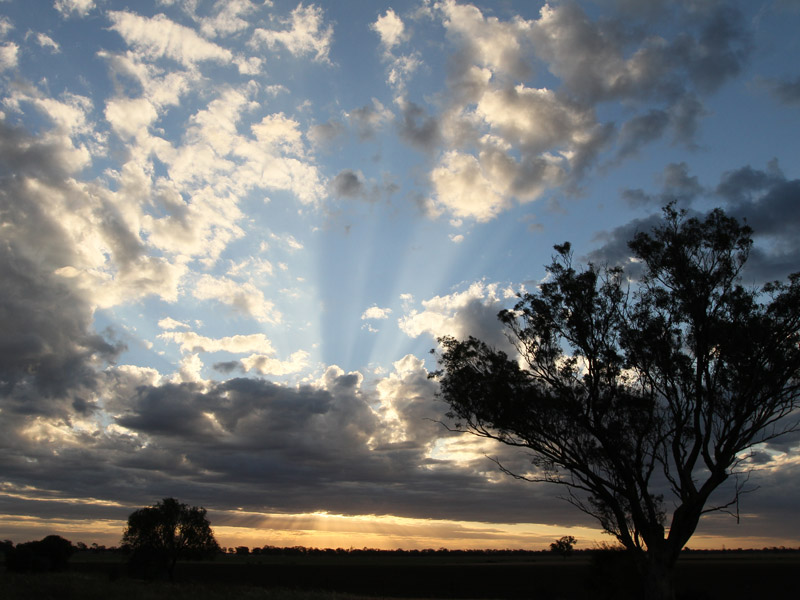 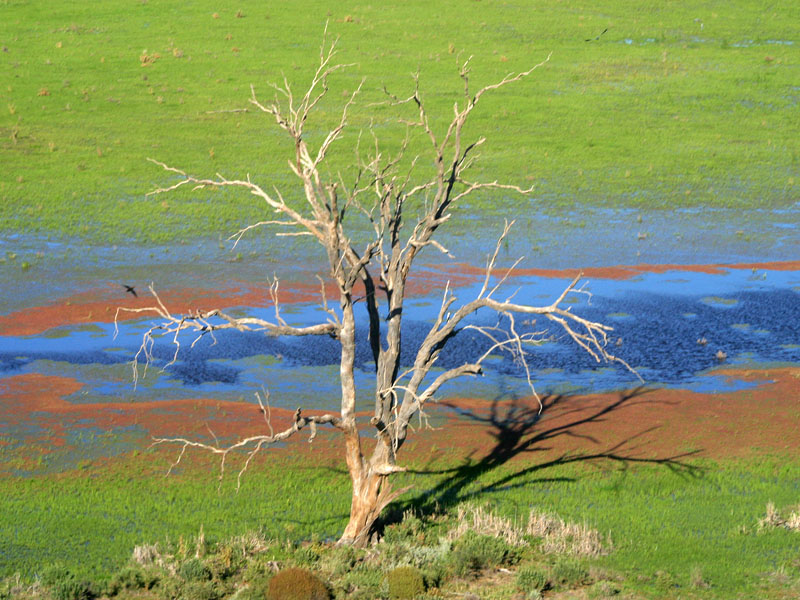 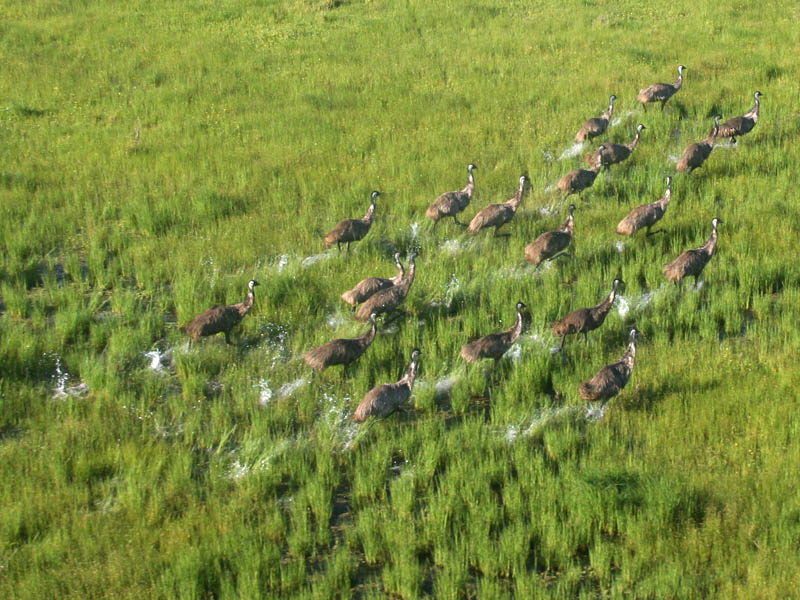 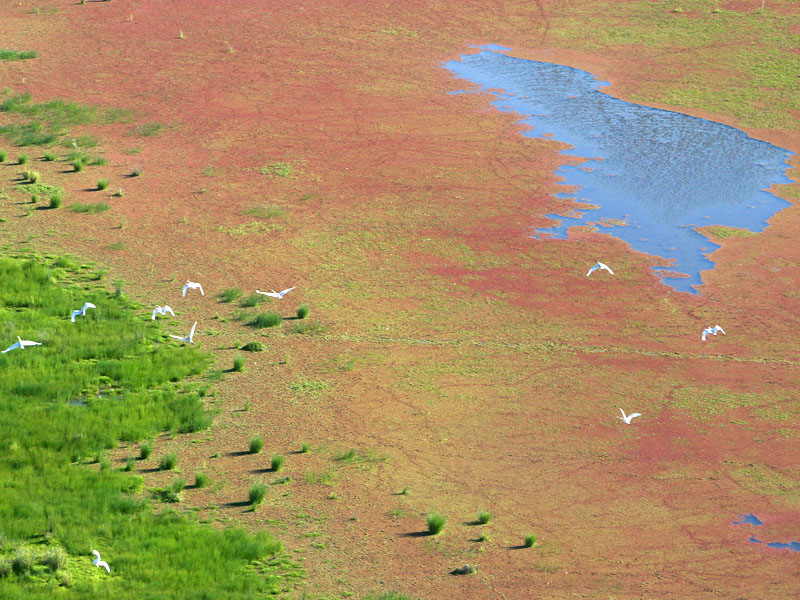