Wedderburn is a small rural service centre which, like so many towns in Victoria, finds its origins in the goldrushes of the 1850s and 1860s. After gold was discovered in 1852 it became a populous and very rich goldmining settlement and it still has a reputation as the place where large nuggets can be found. It is claimed that 80% of the world's largest nuggets have been found within 40 km of the town. The most recent significant find was a 27 kg nugget in 1980 which is now on display in Las Vegas.

Wedderburn is located 217 km north-west of Melbourne on the Calder Highway, between Inglewood and Charlton.

It was originally named Korong but, as the Bendigo Advertiser pointed out in 1884: "That well-known locality, Korong Vale, has been re-christened. It has been so determined in consequence of the confusion of names, there being a Korong (now Wedderburn), a Kerang, a Mount Korong, and the Korong Vale." The town's name was changed to Wedderburn. Some sources claim that it was named after William Wedderburn, a mounted policeman who served on the goldfield.

Wedderburn Self-guided Walking Tour
The best way to explore Wedderburn is to take the 2 km Wedderburn Self-guided Walking Tour. A booklet is available from the Loddon Visitor Information Centre which focuses on the historic points of interest around the town. It offers an insight into many interesting landmarks beginning at the Wedderburn Community Centre which was originally the State School No 794. Many of the town’s buildings were constructed in the 1860s when the search for gold was at its height. The self-guided walking tour booklet includes a map and descriptions of the places of interest. Places of particular interest include:

The Coach House Gallery and Museum
The Coach House Gallery and Museum is located at 53 High Street. It is set in an old general store built in 1864. The Museum section is a recreation of an authentic old-style general store with historic items on the shelves (some were unsold stock found on the premises) including "a wire cheese slicer, rows of biscuit tins, meat safes and an original carved-wood Yates seed display with a bunch of hand-drawn packets of seeds." A general store was built on the site as early as 1840 and the current building dates from 1913. In the cellar are historic photos, wheelwrights’ tools, replicas of gold nuggets unearthed locally and the original printing press from the old Wedderburn town paper of 1888-1932. There is also a blacksmith's display, photographs and other memorabilia, and a collection of carts and buggies in an outbuilding. It is open every day, tel: (03) 5494 1257 or check out https://wedderburn.vic.au/things-to-do/coach-house-gallery-and-museum-day-tour.

Hard Hill Tourist Reserve
Located at the northern end of town and clearly signposted off the main street, the Hard Hill Tourist Reserve was once the site of local gold diggings and is now a pleasant reserve in a charming bush setting. There are a number of remnants of the goldrush era including a government ore-crushing battery and a puddler. There are picnic facilities, tracks through the bush, excellent and detailed signage (see the information for the Gold Battery below) and plenty of parking. Check out https://www.wedderburn.vic.au/things-to-do/hard-hill-tourist-reserve for more details.
There is a sign titled Hard Hill History which explains: "The history of Hard Hill remains obscure, as little of the era regarding "The Hill" was written down or, if it was, it has not survived. However, evidence of the Gold era of the 1850s is still visible today. With a keen eye and an imaginative mind we can visualise the diggers going about their daily life in this harsh environment. There was little or no fresh water. Supplies of meat, when arrived, were usually fly blown. How welcome the fresh fruit and vegetables from the Chinese gardens would have been. No wonder high prices were commanded and received from the diggers. The Hill and the surrounding area had much alluvial gold. After the supply was exhausted, paddocking (as it was known) took place, the ground was turned over and small nuggets were raised to the surface and gathered. Another practice was to remove all the topsoil and put it in the puddler, water is syphoned from the dam, the mixture is "stirred" by a rake attachment to the horse-operated pole, the top slurry is drained off and the remaining dirt is shovelled into hand operated cradles to be washed away from the gold particles."

Wedderburn Gold Battery
There is a very detailed sign at the Wedderburn Gold Battery which explains: "When this gold battery, known as the 'New Hope', was opened in June 1905, it was the eighth battery to have been erected in the Wedderburn district ... the battery was opened in the presence of a number of townspeople and officials by Miss Cosh, daughter of one of Wedderburn's first residents. It had been paid for by the Government, and it was hoped that it would lead to a revivial of mining in the area. Built by Mr Gillon, an engineer, it was originally worked by a steam engine. The battery itself was of iron construction, with five heads or stampers, and could be driven by eighty blows per minute."

Eucalyptus Distillery
Located at Hard Hill Tourist Reserve is a eucalyptus distillery which is used to produce eucalyptus oil. Visitors can watch a demonstration of a Eucalyptus Stew Pot which involves cutting the eucalyptus leaves, stacking them in the pot, and separating the raw oil. Tel: (03) 5494 1257 or check out https://www.wedderburn.vic.au/things-to-do/wedderburn-day-tour.

Soldiers Memorial Park
The Soldiers Memorial Park is located in the centre of town. It was constructed as part of its Commemoration of the Centenary of Anzac program and features a dramatic bronze sculpture of World War One Victoria Cross recipients Albert Borella and Albert Jacka, both of whom had grown up in Wedderburn.

Barrie Johnson's Detectors
Barrie Johnson's nugget finders and detectors shop is located on the Calder Highway. Barris is recognised as a local expert on fossicking and old goldmining sites. His website explains that "Our field trip every week is a concentrated learning exercise on detecting. IT'S FREE - You don't need a detector and everyone is welcome." and he will answer queries on tel: (03) 5494 3492 seven days of the week from 9.00 am - 10.00 pm.

Historic Places of Interest
Methodist Church
Located in High Street, the former Methodist (now Uniting) Church is a simple Gothic Revival brick structure with a small central tower built in 1866. It is listed in the Victorian Heritage Database (see https://vhd.heritagecouncil.vic.gov.au/places/68780) as "A brick church of 1866 of a naive but particularly interesting form, with corner pinnacles larger than their bases and a stubby square tower reducing in three stages and with round arched openings contrasting with the pointed windows of the nave."

The Lonely Grave
At the northern end of town (signposted off the highway) is an isolated bush grave of Scottish gold miner, Thomas Whyte, who died in 1856. Check out https://wedderburn.vic.au/things-to-do/lonely-grave. The site offers access to a number of letters Whyte wrote to his family back in Scotland.

Wychitella Flora and Fauna Reserve
Located to the north of Wedderburn is the Wychitella Flora and Fauna Reserve which was created to protect a section of mallee forest occupied by the Lowan or mallee fowl and the marsupial mouse. The mouse, a rare creature, is indigenous to north-western Victoria. Colourful wattles bloom in July and August and many orchids in spring.

Mount Korong
Located 15 km south of Wedderburn, Mount Korong is a dominant feature in the area. The first European to climb it was explorer Thomas Mitchell in 1836. To get there follow the Calder Highway south-east for 9 km then turn left onto Powlett Road. The excellent Goldfields Guide has detailed information at https://www.goldfieldsguide.com.au/explore-location/370/mount-korong. It notes: "Mount Korong is a beautiful granite outcrop located between Inglewood and Wedderburn. Countless gigantic boulders are heaped across the mountain and surrounding hills, creating unique shapes, caverns and spectacular scenery ... Mount Korong is fantastic for bushwalking, free camping, birdwatching and rock climbing. Dogs are permitted within the Mount Korong Nature Conservation Reserve if kept on a lead. Gold prospecting is also permitted."

* Prior to the arrival of Europeans the area was home to the Djadjawurrung Aboriginal people.

* The first European to pass through the district was Major Thomas Mitchell in 1836.

* The first squatter to take up land in the district was John Catto in 1840.

* Wedderburn was started as a result of a goldrush which occurred when a shepherd named Brady found some nuggets in 1852.

* A public crushing plant was opened in 1859 and operated intermittently until the end of the century. That year saw the opening of the Korong Miners' Literary Institute.

* By 1862 the Kingower and Wedderburn Road District had been established.

* In 1864 Wedderburn became part of the Korong Shire.

* The Anglican church was consecrated in 1866.

* When the gold began to dwindle the settlement declined but was saved from extinction by the 1869 Land Act which opened up the large squatting runs to small landowners.

* The railway reached Wedderburn Junction in 1883.

* An attempt at large-scale dredging failed in 1910 due to lack of water.

* Water storage at Skinners Flat was completed in 1928.

* A Bush Nursing Hospital was established in 1938.

* Three nuggets worth £10,000 were found in a backyard in the 1950s, precipitating a major but short-lived rush to the area.

* The Korong Historical Society was formed in 1967.

* In October 1980 Kevin Hillier found the 'Hand of Faith' nugget which was discovered in the Kingower area to the south-east of the town. Weighing a remarkable 27.2 kg it sold for $US1 million and is on display in the Gold Nugget Casino in Las Vegas.

The local council has a useful website. Check out https://wedderburn.vic.au. 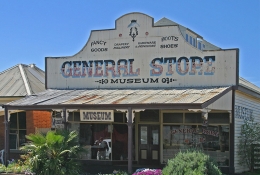 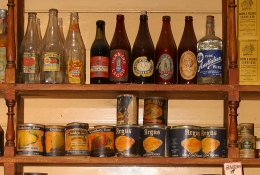 The shelves of historic groceries at the Coach House Museum 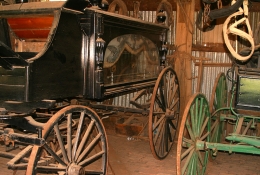 An historic hearse at the Coach House Museum 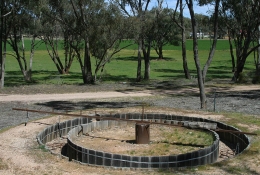 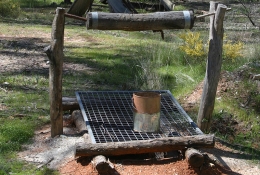 A mine shaft at Hard Hill Tourist Reserve 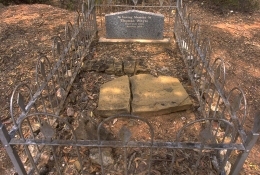 The lonely grave of Thomas Whyte