Wee Jasper is a tiny village in a pretty valley which is a geological wonderland. It is located at the foot of the Brindabella Ranges and edged by the backwaters of Burrinjuck Dam. The main attraction in the area is Carey's Cave which, with seven chambers of impressive crystal formations, has two tours daily and three tours on weekends. The area is also popular with caravanners and campers. There are a number of camping locations in the surrounding reserves.

It is believed that the name was given to the area by a Scotsman who finding green gemstones insisted that they were "wee jasper". - i.e. small jasper.

Carey's Cave
Carey's Cave is located 6 km north-west of the village (it is clearly signposted at the end of the village) and is the major attraction in the area. The cave, which was discovered in 1875 by John Carey, features some striking and very colourful limestone formations within seven chambers. There are stalagmites, stalactites, columns, flowstone and helictites. The limestone has been produced from ancient compacted corals which formed some 400 million years ago. Interest in the caves developed rapidly when the spine of a megafauna wombat was found in 1957. As a result the caves were explored and opened up by members of the Canberra Speleological Society. Official tours of the caves started in 1968.
The caves are easily accessible. There are 30 steps down to the caves and beyond that the paths are mostly level. The chambers, pathways and stairs are well-illuminated and two different guided tours (there is a delightful informality with the tours often being determined by the visitors) are available on Friday, Saturday and Sunday at 12.00 pm and 1.30 pm. Typically the tours take around 75 minutes. The temperature inside the caves remains between 15°C-17°C all year round. There is a picnic area with on-site barbecues. For more details check out http://www.weejaspercaves.com/cavetours.html, tel: (02) 6227 9622.

The Geology of Wee Jasper
The Wee Jasper area is diverse geologically. The dark rock which characterises much of the valley is limestone which runs in a belt that is 20 km long and only one km wide. It was formed 400 million years ago during the Devonian period when the area was covered by a shallow, warm sea. Coral and lime from the sea was crushed and formed layers of limestone. The organic material in the sea gave the rock its distinctive colouring. When the sea level fell and the rock was exposed it began to be weathered by rainfall. The rain was mildly acidic and it cut distinctive grooves, resulting in fluting (known as rillenkarren) into the particularly hard limestone.
The cracks in the limestone allowed rainwater to flow through the limestone and this resulted in tunnels and caves. There are caves along the length of the valley but most of them are covered by red clay sediments.
The one accessible cave is Carey's Cave which is known to geologists as a phreatic cave - ie a cave that was originally formed below the water table. The cave has distinctive sculptured rock surfaces and the dropping of the water table had created crystal formations. There are fossils embedded in the limestone including corals, sea snails, cephalopods, lungfish, placoderms as well as megafauna kangaroos, wombats and marsupial lions.

Reserves around Wee Jasper
Carey's Reserve
Located on Caves Road, Carey's Reserve is adjacent the south-western tip of Lake Burrinjuck. There are boat-launching facilities when the dam is 65% full, as well as fishing, camping, picnic tables and toilets, tel: (02) 6227 9626. Check out http://weejasperreserves.com.au for useful information and camping fees.

Billy Grace Reserve
The Billy Grace Reserve is located 4 km from Wee Jasper on Nottingham Road which runs off the Wee Jasper Road to Tumut. This is the main reserve and it has the office for the reserves as well as camping facilities, barbecues, hot and cold showers, toilets and Sarah's Playground which is situated adjacent the Goodradigbee River. Swimming and fishing are popular. Check out http://weejasperreserves.com.au for useful information and camping fees, tel: (02) 6227 9626.

Swinging Bridge Reserve
Further along Nottingham Road is Swinging Bridge Reserve which is also on the river. It offers camping, picnic tables, swimming and toilets and is known as an excellent place for fishing. Check out http://weejasperreserves.com.au for useful information and camping fees, tel: (02) 6227 9626.

Micalong Creek Reserve
Beyond Swinging Bridge Reserve and still on Nottingham Road, on Micalong Creek, is Micalong Creek Reserve which offers camping, fishing, swimming, walking, picnic tables a shower and toilets. It is the starting point for a number of walks along Micalong Creek including the Swimming Hole, Cascades (Micalong Falls) and the junction walk. Check out http://weejasperreserves.com.au for useful information and camping fees, tel: (02) 6227 9626.

Hume and Hovell Walking Track
The remarkable 426 km Hume and Hovell Walking Track retraces a portion of the explorers' steps during their 1824 expedition from Appin to Port Phillip. The journey was remarkable. "The party assembled at Hume's farm at Appin on October 2, 1824. The two leaders had three assigned manservants each. Hovell noted in his journal the supplies he took with him: 640 lbs of flour, 200 lbs of pork, 100 lbs of sugar, 14 lbs of tea, 8 lbs of tobacco, 12 lbs of soap salt ... Mr Hume has supplied the same quantity.
During the expedition, Hovell kept a detailed record in his journal of bearings and distances. He also accurately described the country through which they passed. The return journey of almost two thousand kilometres was accomplished in sixteen week.
There is a detailed description of the relevant section of the track at https://www.humeandhovelltrack.com.au/track/#map-1.
The relevant sections describe:
"From here, a vehicular track is followed south for 4 km to intersect with a sealed road near Carey’s Cave. The track takes Caves Road into Wee Jasper, passing Barbers Bay near Carey’s Cave and Carey’s Reserve, a public camping ground used by campers, fishermen and water sport enthusiasts. From Carey’s Reserve, it is 2.1 km to Wee Jasper Village and then only a short distance to the entry of Wee Jasper Nature Reserve.
"From Wee Jasper two track options exist to get to the Fitzpatrick Trackhead: straight along Wee Jasper Road, or on a foot track through the Wee Jasper Nature Reserve. The foot track heads into the reserve and climbs steeply over a stony ridge covered with a dry sclerophyll forest. In spring and early summer the wildflowers are very attractive. From the top of the ridge, looking back towards Wee Jasper, there are some good viewing points to take a breather and view the village area and the Goodradigbee Arm of Lake Burrinjuck.
"The track descends down the western side of the ridge, crosses Wee Jasper Creek and reaches the Wee Jasper Road. From here the track heads left along a foot track for 1.5 km to Fitzpatrick Trackhead.
"From the Fitzpatrick Trackhead, the track heads west through fairly rocky terrain before meeting up with Wee Jasper Road, and the junction of the walking track through the Wee Jasper Reserve.  The next 6 km of the track is all uphill to the summit of Mt Wee Jasper (1,121m). Views from the top of Mt Wee Jasper are restricted, but the climb does offer a rest stop and the chance to sign the visitors’ book, located in a white, plastic container. It’s the first of several such log books placed on the track."

* Prior to European occupation there was a large Aboriginal population in the area, mostly Ngunnawal people.

* In 1821 the exploratory party of Hamilton Hume became the first known group of Europeans in the area. They explored the Yass Plains.

* Hume returned with William Hovell in 1824 during their ground-breaking expedition to Port Phillip Bay and passed through the Wee Jasper valley in late October.

* Settlers followed them, bringing flocks of sheep which represented the start of the local wool industry. The first settler was W.H. Dutton who took up 1024 ha at the junction of the Murrumbidgee and Goodradigbee Rivers.

* A bush track had been cut between Goulburn and Yass Plains by 1825.

* By 1859 prospectors were passing through Wee Jasper on their way to the Kiandra goldfields.

* Police barracks were built in the village in the 1880s.

* In the early 1900s the poet, Banjo Paterson, was a regular visitor to Coodravale property as he was a part owner.

There is an excellent and very comprehensive local website. Check out http://www.weejaspercaves.com. 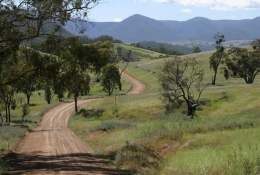 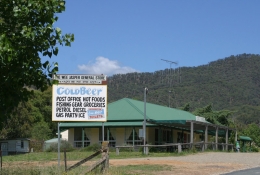 The Wee Jasper general store and post office in its heyday. 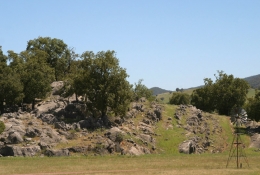 The limestone bedding was pushed upward by subsequent volcanic action. 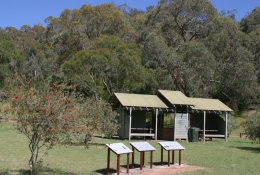 An entry point to the Hume and Hovell Walking Track. 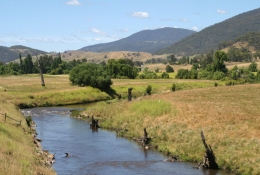 The Goodradigbee River flows through the valley at Wee Jasper. 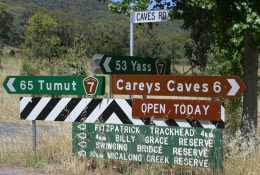 Directions to the main attractions around Wee Jasper. 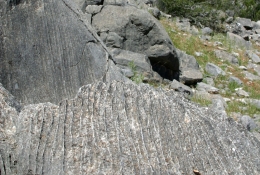 Outside Carey's Cave there are fine examples of weathered fluting (Rillenkarren) of the 400 million year old limestone.