The self-proclaimed Cotton Capital of Australia.

For half a century Wee Waa (pronounced "we war') has been known as The Cotton Capital of Australia. Cotton was first introduced into the area in the early 1960s and intensive research and improved irrigation have created the largest cotton yields in Australia, bringing considerable prosperity to the district. Today that has been expanded with rice and wheat. The main attractions lie beyond the town. Yarrie Lake is a delightful retreat for picnics and relaxation although in summer it is often empty and the Australia Telescope is superbly organised so that visitors can learn about radio telescopes and the way they see into outer space.

Wee Waa is 40 km west of Narrabri, 565 km north-west of Sydney via Muswellbrook ang Gunnedah and 190 m above sea-level.

It is widely accepted that "wee waa" is a Kamilaroi word meaning "fire for roasting". Although other sources suggest it may mean "fire stick" or "place for fire".

Wee Waa Historical Walk
There is a downloadable Wee Waa Historical Walk which lists a total of 28 places of interest. Check out http://www.visitnarrabri.com.au/wp-content/uploads/2015/09/Wee-Waa-Historical-Walk-brochure.pdf which is also available at the Narrabri Visitor Information Centre. The walk is particularly easy as the town is flat and the main attractions are contained within three blocks. Many of the locations are now deserted or the buildings have been replaced. Of particular interest are:

1. 'Namoi Echo' Museum
The Wee Waa Echo Museum is located in Rose Street. Its mission statement is to "collect and display items, machinery and documents pertaining to the history and culture of the Wee Waa district, promotes its history and provides family research from its extensive archives." and the exhibitions include "precious old machinery, a spray plane, one of the original 2 row cotton pickers, a Blacksmith's shop, Aboriginal Artefacts, and many old items from the past including tools and domestic goods." The museum also includes Schwager's Cottage, built in 1880s as the local saw mill cabin and moved to the site when it opened in 2006. The museum is open Wednesday, Thursday and Friday from 10.00 am - 3.00 pm and Saturday from 10.00 am - 4.00 pm.

7. Wee Waa Lagoon
Behind the town is a particularly attractive lagoon crossed by a timber bridge which was built in 1927. The lagoon supplied the town with water in the early days and the reliable supply of water prompted the development of market gardens. Prior to European settlement it was a popular place for local Kamilaroi corroborees.

13. War Memorial
It is common in the towns around the Namoi to build a War Memorial as a clock tower in the main street. Thus, in Wee Waa, on the corner of Rose and Church Streets, there is a red brick clock tower which was formally dedicated in 1938 to honour the locals who served in World War I.

26. Court House
The small brick court house at the corner of Rose and Nelson Sts was built around 1880. It replaced the original Court House which was built in 1849 and made Wee Waa the centre of police and legal administration in the district. Between 1849 and 1865 the town had the local magistrates who heard court cases. In 1865 they moved to Narrabri.

Police Station
The very modern police station in Nelson Street is part of local mythology. It was supposedly built by mistake when the plans for a Snowy Mountains structure were incorrectly sent to Wee Waa. The roof, which is about 40° from the vertical, was clearly designed with heavy falls of snow in mind. The roof takes its inspiration from alpine huts in Austria and Switzerland which is pretty funny on a dead, flat plain in western New South Wales where it has never snowed and the summer temperature can rise to 45°C. “The story goes,” according to one bemused local, “that someone sent the wrong plans out here. The builder, thinking he was dealing with some trendy city architect who wanted something distinctive, just built the Police Station and it was only when someone came up from Sydney to inspect the finished structure that it was realized that the wrong building had been constructed.”

Yarrie Lake
Located 8 km south-west of the Australia Telescope complex is Yarrie Lake, a large pool of water (1.6 km in diameter) on the boundary of the Pilliga Scrub. It is believed by some to have be en formed by a falling meteor. It is a haven for water birds with over 70 species being observed including birds which have migrated from as far north as Russia. The lake has a distinct milky colour which probably comes from the sand and soil of the surrounding creeks. The lake is ideal for camping, swimming, sailing, waterskiing and other water sports. If there has been a period of drought the lake dries up and is just a large flat area surrounded by trees and camping spots.

Burren Junction
Burren Junction is a small town located 53 km west of Wee Waa on the road to Walgett and Lightning Ridge. Its most important attraction is the hot artesian bore bath which was sunk in 1921. The bore depth is 689.8 metres and it draws water from the Great Artesian Basin which is estimated to be 2 million years old and hold 8,700 megalitres. There is a large cement pool surrounded by tamarind trees and filled with warm water.

CSIRO Australia Telescope
In 1967 the CSIRO established a radio helioscope at Culgoora and by the 1980s the Australia Telescope had been built. It was linked to the telescopes at Coonabarabran, Parkes and Tidbinbilla. The Australia Telescope is the most powerful in the Southern Hemisphere. It receives radio waves from deep space by means of six gigantic dishes which are placed on a rail track so they can be moved and adjusted. The telescope is located 20 km south-east of Wee Waa with access via the Old Pilliga Road. Visitors are welcome. The telescope is open seven days a week and admission is free. There are interactive “hands on” displays and the “Whispering Dishes” creates an audio situation where the merest whisper can be transmitted over one hundred metres by aligning two small telescope dishes. The telescope is the only one in the southern hemisphere capable of receiving signals one thousand times higher in frequency than FM radio stations. The 'self guiding' new display's are open every day 8.00 am to 4.00 pm. It is a superb display which is both impressive and hugely informative. The visit is definitely worth the effort.

Pilliga
Located 59 km west of Wee Waa is the tiny township of Pilliga. Pilliga was once an important stop on the Cobb & Co route. Those days are recalled by the hitching rails outside the stores which are still used by local stockmen. It has a hot artesian bore bath in a tiled pool. The water temperature is 37°C. The bore was sunk in 1902 and the original flow was 1.25 million gallons a day. In recent times the flow has been reduced. The waters are recognised for their therapeutic values. The Pilliga Cemetery is located on the road out to Coonamble. It is worth pausing because, unusual for an  Australian country town, it has the graves and headstones of the Allum family who were Indian hawkers who travelled through the western area in the 1880s. They are clearly marked on the downloadable map at http://www.visitnarrabri.com.au/wp-content/uploads/2015/10/Pilliga_bw.pdf.

Pilliga Scrub
Located south of Pilliga is the Pilliga Scrub, Pilliga Forest or Pilliga Woodlands which cover 500,000 ha, a vast woodland area which was lightly timbered before the arrival of Europeans. Heavy grazing on poor soils encouraged the growth of thick Australian timber, including the largest cypress pine forest in the Southern Hemisphere. This development gave birth to an active timber industry. Today the Forest has 300 animal species and over 900 plant species. The scrub is superb in spring when the wildflowers are in bloom and significant colonies of koalas can be observed. A timber industry existed in the forest until 2005 when it was scaled back by the New South Wales Government. Today it borders on viabillity and there is still extensive cutting of the native cypress pine which regenerated in the 1950s. For more details about the area check out http://www.visitnarrabri.com.au/wp-content/uploads/2015/10/Forests-of-the-Pilliga-Scrub.pdf. There is a brochure available for download and all sources advise purchase of a good map which is available from National Parks and Wildlife of the Visitor Centre in Narrabri.

*  It is known that escaped convict George Clarke roamed through the area from 1826-1831 and was accepted by the Kamilaroi people.

* Allan Cunningham's positive account of the Namoi River prompted the authorities in Sydney to send Thomas Mitchell on an expedition into the district.

* In 1847 the government established a police station and court of petty sessions with a constable and resident clerk, but no permanent magistrate, at Wee Waa to oversee law and order in the district. It soon became the headquarters for the Wee Waa police district.

* The town was surveyed in 1849. That same year a post office opened. At that time the "town" comprised six slab buildings, including a grog shop.

* The town was gazetted in 1858 with land sales commencing the following year.

* The growth of Narrabri in the 1860s and 1870s saw many services  transferred to the newer town.

* Court hearings were transferred by the mid-1860s.

* The railway was extended from Narrabri to Wee Waa in 1901.

* Burren Junction came into existence as railway camp in 1902.

* In 1909 the Sisters of St Joseph established a convent in the town.

* In 1960 the Keepit Dam greatly improved local irrigation and enabled the development of the cotton industry.

* The Australia Telescope was opened in 1988.

* In 2012 the town experienced a major flood which caused extensive damage.

The town has its own website. Check out http://www.weewaa.com. 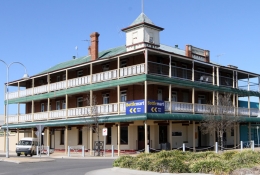 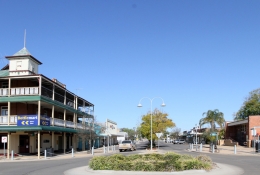 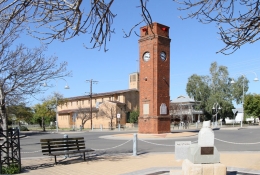 Town clock with the modern Catholic Church in the background. 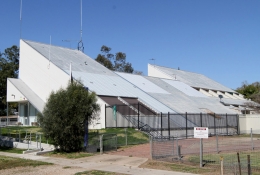 Wee Waa Police Station with its roof designed for snow. 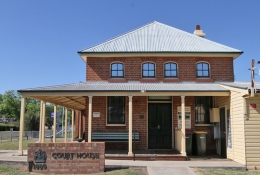 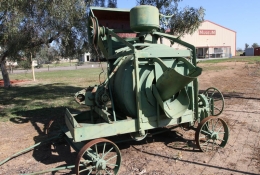 The Namoi Echo Museum on the way into town from Narrabri. 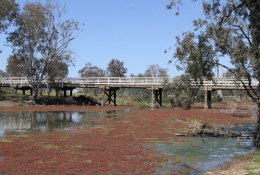 The bridge across the Wee Waa lagoon. 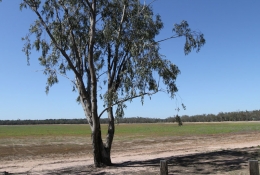 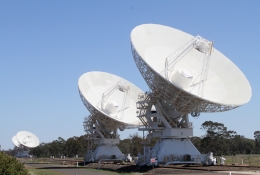 Four antennae measuring 22 metres across, weighting 270 tonnes and capable of travelling along the railway lines at 4 km/hr. 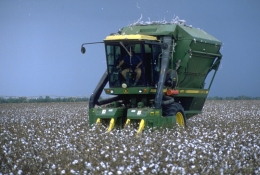 Cotton is a mainstay of the local economy.