Bauxite mining town on the west coast of Cape York.

Today Weipa is a bauxite mining town. Historically it started life as the traditional home of the Alngith Aboriginal people. It became a Presbyterian mission in 1898 and in 1967 it was a town, built by the bauxite mining company Comalco, which has, over the years, grown to a population of over 3,500. Weipa is now recognised as the largest bauxite mine in the world. The known deposits are likely to last for another two centuries at the present rate of extraction.

Weipa is located 2,478 km north of Brisbane. It is 819 km north west of Cairns which is approximately 480 km on unsealed road.

The name "Weipa" is derived from the Anhathangayth Aboriginal language. It comes from "Waypa" which means "fighting ground". The town which was built by Comalco in 1967 was named Weipa North by the Queensland Government.

Mine Tours
The Weipa Caravan Park & Camping Ground Mine and Town Tours depart from the Caravan Park office at 8.30 am and 2.30 pm, last around 2.5 hours, and including a visit to Rocky Point, a tour of the working mine site where the huge 190 tonne trucks and the rail and conveyor belt system can be observed and the process of shipping bauxite is explained. Tel: (07) 4069 7871 and check out http://www.tourismcapeyork.com/explore/western-cape/tours/weipa-caravan-park-camping-ground-mine-town-tours for details.

Western Cape Eco Tours
Located on Kerr Point Road, tel: 0447 009 044, Western Cape Eco Tours offer three tours around Weipa. The Daily Tour concentrates on the waterways and the diverse wildlife in the area including lots of saltwater crocodiles and impressive flocks of birds. There is also a Sunset Tour which departs at 4.30 pm and offers drinks and canapes while looking for crocodiles and birdlife. And there are full day fishing charters out into the Gulf of Carpentaria to go fishing. For more information check out http://www.westerncapeecotours.com.au/tours.html.

Fishing
The town is famous for its exceptional fishing. There are excellent fishing spots on the shoreline around town including next to Mission River and Andoom Creek bridges, Evans Landing Wharf, Kerr Point and Red Beach. There are also fishing trips out into the Gulf where it is possible to catch queenfish, grunter, barramundi, salmon, cod, snapper, mangrove jack, trevally and Spanish mackerel. It is also possible to hire a boat to go fishing. Check out Tackle World at http://www.tackleworldweipa.com.au for more information.

Western Cape Cultural Centre
Located on Kerr Point Drive, overlooking the Embley River, the Western Cape Cultural Centre is open from 10.00 am - 2.00 pm Monday to Friday from March to November. The aim of the Cultural Centre is to "showcase the history of Weipa and its surrounding communities. It plays an important role in preserving traditional language and culture from the region through its informative displays and artwork." It is an ideal place to see local arts and crafts, to enjoy the beautiful lawns leading down to the river and to enjoy coffee and light refreshments. Check out http://www.weipatownauthority.com.au/western-cape-cultural-centre for more details. Tel: (07) 4069 7945.

Weipa Shell Mounds
Located to the south of the town, on the banks of the Embley, Hey, Pine and Mission Rivers are the Weipa Shell Mounds. These mounds contains nearly 200,000 tonnes of shells which seem to have been placed in the area about 800 years ago. There are a number of theories of the origin of the mounds (some of which are up to 9 metres high).  They are "thought by archaeologists to be among the world's largest prehistoric middens. The mounds appear to be composed almost entirely of whole and fragmented shell valves of the cockle Anadara granosa and artefacts have been recovered from them. Some researchers have argued that the tall, steep-sided shell mounds were not built by shellfishing Aborigines but by generations of mound-building Scrubfowl Megapodius reinwardt. They may also have been built by mound-building organisms include megapodes, termites and ants, alligators and crocodiles, and rodents. There is a very detailed thesis by Dr. Tim Stone which looks at the likely origins. It can be read at https://openresearch-repository.anu.edu.au/handle/1885/116885.

* Prior to the arrival of Europeans the area around Weipa was home to the Alngith Aboriginal people.

* The Dutch explorer Willem Janszoon, sailing the Duyfken, first sighted the coast near Weipa in 1606. The local Aborigines speared one of the sailors.

* In 1802 while circumnavigating Australia in the HMS Investigator, Matthew Flinders noted that the cliffs around Albatross Bay had a distinctive reddish hue.

* Moravian missionaries arrived in the area in 1891 and established a mission at Mapoon.

* A Presbyterian mission was established at Spring Creek in 1893.

* By 1896 John Thomas Embley had surveyed the land where Weipa now stands.

* In 1901 the geologist C.F.V. Jackson noted the presence of bauxite in the area.

* In 1932 the mission was moved to Jessica Point on the Embley River.

* In 1947 further research into the mineral potential of the area was carried out but the samples were poor and generated little interest.

* An exploration camp was established at Munding in 1956.

* The Weipa township is totally planned. It was built by Comalco and the Queensland government in the early 1960s.

* In 1960 work began on a pilot bauxite processing plant at Evans Landing.

* The first shipment of bauxite to Japan occurred in 1961.

* The port of Weipa was officially opened in 1962.

* By 1963 bauxite was being shipped from the port in commercial quantities.

* In 1966 the Weipa Mission was taken over by the Queensland government. That year saw the first editions of the Alumina newspaper.

* Weipa was officially opened by the Premier of Queensland in 1967. A new airport was opened that year and Ansett started flying to the town.

* Weipa's calcination plant was opened in 1970.

* A road and rail bridge was completed across Mission River in 1971.

* In 1997 a voluntary indigenous mining agreement was signed.

* 2002 saw the opening of the Western Cape Cultural Centre.

* By 2006 Comalco had been renamed Rio Tinto Aluminium.

* Today Weipa is a mining town where bauxite is mined, washed, graded and loaded for shipment to the aluminium processing plant at Gladstone. Sometimes the raw bauxite is shipped directly overseas.

Weipa and Western Cape Tourism has an interesting and useful Facebook page. Check out https://www.facebook.com/weipaandwesterncapetourism or tel: 0484 870 050. There is a very useful, downloadable brochure on the entire Cape. Check out http://www.tourismcapeyork.com/wp-content/uploads/2017/03/TCY-Visitor-Guide-2017-web.pdf.

The http://www.weipatownauthority.com.au has lots of useful information about the town and the district. The site - https://www.capeyorkaustralia.com/weipa.html - is also particularly useful. 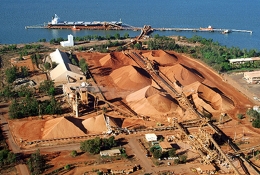 An aerial view of the Weipa Port 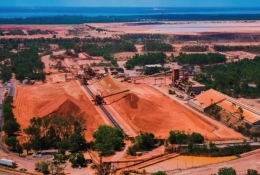 Vast bauxite mounds waiting to be shipped out 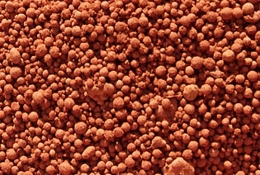 The magic of the area ... bauxite pellets to be turned into aluminium 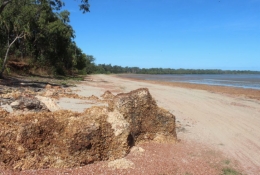 The beach at Weipa 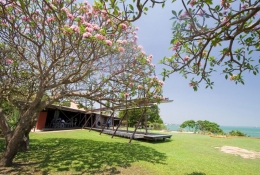 The lawns and trees in front of the Western Cape Cultural Centre. 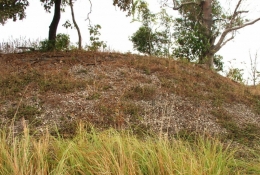 One of the many shell middens in the area.