Town near the Weldborough Pass with its spectacular display of tree ferns.

The tiny village of Weldborough is known for its exceptional pub - the Weldborough Hotel which, after many changes in ownership is currently a celebration of Tasmania's micro breweries - and the glorious Weldborough Pass where huge tree ferns grow on either side of the road.

Weldborough is located 117 km north-east of Launceston via the Tasman Highway and 296 km north of Hobart via the Midland, Esk and Tasman Highways.

Weldborough was named after Sir Frederick Aloysius Weld who was Governor of Tasmania from 1875-1880.

Weldborough Hotel
The original Weldborough Hotel was established in 1876 but was burnt down in the 1920s. The current building dates from 1928 and offers MicroBru beers including, on tap, Van Diemen White Hills, Van Diemen Pale Ale, Iron Horse Pale, Morrison Saison and Boags Draft. A previous owner, with a droll sense of humour, used to describe it as  'the worst pub in Tassie' and offer such dishes as 'maggot mornay' and 'leeches and cream'.

Weldborough Pass
To the east of Weldborough on the Tasman Highway is a superb and spectacular fern display. Huge ferns line either side of the road interspersed with stands of blackwood, sassafras and myrtle. Weldborough Pass rises to 595 m and Weldborough Pass Scenic Reserve provides an easy 20 minute walk into the rainforest with excellent information signage to explain the flora and fauna.

In 1928 the Launceston Examiner waxed lyrical about the beauty of the roads around Weldborough: "The car swings round the sharp corners and bends, passing through the lovely fern and myrtle bowers, as the motor ascends or descends one steep hill after another. Is it any wonder that many of the tourists from the mainland of Australia, either shut up from one year's end to the other in the cities, or whose lives are spent on the blazing plains of the mainland, should delight to sometimes spend a few months among our lovely hills and beautiful valleys, by the side of our rivers that never run dry, and bask in the refreshing sunshine, while the gentle breeze waves the majestic foliage and sighs sweetly among the tops of our sassafras, pine, and myrtle trees. The noble giant of the forest towers far above, and the beautiful fern bowers glisten with dew in the sunshine. Yes, the Tasmanian oak, the stringy bark tree, is in our island monarch of all the other trees in the forest, but for sublime beauty give me the lovely man-fern and deep gullies on the way from Herrick railway station to St. Helens."

Moorina Cemetery and the Trail of the Tin Dragon
Located 10 km north of Weldborough on the Tasman Highway, and now part of the Trail of the Tin Dragon, Moorina (originally known as 'Krushkas Bridge' and renamed Moorina, after Truganini's sister) was once an important tin mining centre. Today the main interest lies in the cemetery where a solitary Chinese headstone recalls the hundreds of Chinese who worked in the tin mines. There is a memorial erected to the Chinese miners and a restored burning tower. There is also an interpretation marker which describes the importance of Moorina as a transport hub and explains why the Chinese grave faces west.

From the reserve car park, it’s an easy ten-minute stroll through the heart of an ancient temperate rainforest studded with colossal tree ferns, sassafras, myrtle and beech trees to a swiftly flowing creek ... St Columba Falls State Reserve is home to elusive platypuses, who make their burrows along the shores of the pristine creek ...Overlooked by densely wooded hills, this heavily-forested country was prime habitat for thylacines – Tasmanian Tigers – once Australia’s largest carnivorous marsupial, which have been listed presumed extinct' since 1986, fifty years after the last documented thylacine died at Hobart Zoo in 1936. There have been some 4,000 reported sightings of thylacines over the past 50 years, many in the north-east region.St Columba Falls was the scene of one famous 1995 sighting, when a local ranger reported spotting a tiger sitting on a rock ledge near the falls. It was just one of around one-dozen sightings of the mysterious marsupial reported in the region each year."

For more information (the above quote is from their site) check out the Visit St Helens webite - http://www.visitsthelenstasmania.com.au/places/pyengana/

* Prior to European settlement the Weldborough area was inhabited by the Pyemmairrener Aboriginal people who had lived there for thousands of years.

* Weldborough was initially named Thomas Plains after a surveyor. At the time it was planned to open the district to rural development but tin was discovered and this led to a mining boom.

* By the 1880s the town had pubs, general stores, butcher's shops, a hotel and a racecourse. Miners arrived from Georges Bay and, as one book observed: "In the roaring days of the Weldborough Mine the lights were never dimmed, and with three shifts to every bed the trade 'roared on' continuously, and every prospect bore a pleasant smile."

* By the 1890s it was estimated there were between 800-1200 Chinese working in the mines. Weldborough was the largest Chinese community on any tin field in Australia. They are said to have outnumbered the Europeans. This meant the town became famous for its Chinese New Year celebrations. It was also the home of the first casino in Tasmania which was run by the wealthy Chinese merchant, Maa Mon Chin, and drew people from all over the island to play Mah Jong and Fan Tan. 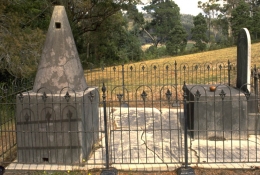 The Chinese section of the Moorina cemetery (photo taken 1995) 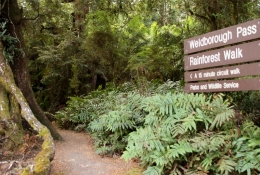 The beginning of the short and magical Weldborough Pass Rainforest Walk. 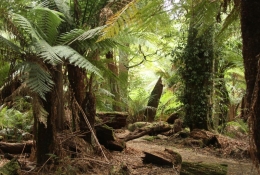 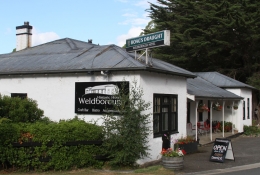