Ferry crossing and holiday town on the Murray River

Wellington is a tiny settlement on the banks of the Murray River. Historically it was a Court House, a ferry terminal, a hotel and a few houses. In recent times the desirability of a house beside the Murray River has seen development on both sides of the river with a canal housing development occurring near the impressive Pangarinda Botanic Gardens.

Wellington is located at the point where the Murray River enters Lake Alexandrina, 102 km south-east of Adelaide via Murray Bridge and Tailem Bend.

In 1840 John Morphett, who had purchased a large landholding in the area, had a township surveyed which he named after the Duke of Wellington. He got permission from the Duke to name the town after him.

Wellington Courthouse
The Wellington Court House is a National Trust building. The Police Station, Ferry House and Postal and Telegraph Offices were all part of the Court House complex which was the site of the first police station in Wellington in 1841. A new building was built in 1849 and the present building in 1864. The stores and stables were attached in 1865. It ceased to operate in 1946 and was purchased by the National Trust in 1975. Today it operates as a cafe and upmarket accommodation. For more details tel: (08) 8572 7330 or check out https://wellingtoncourthouseontheriver.com.au.

Wellington Hotel
Located at 27 Mason Street, the Wellington hotel is a pleasant, modern hotel on the banks of the Murray, with views across the river, just upstream from the ferry. It has an impressive past. The original Wellington Hotel was opened on the site as early as 1846. Check out https://www.wellyhotel.com.au/ for details.

Wellington Ferry
The Wellington Ferry crosses the Murray River at a rate of six journeys per hour. It is free. If you need more information, check out tel: (08) 8532 8111.

Pink Lake
Located 32 km south of Wellington on the Princes Highway to Meningie, the Pink Lake is an impressive and unusual sight. A few years ago someone put a very simple sign on a telegraph post beside the lake. It read: "The pink colouring of the lake is a chemical called carotene. It is produced by an aquatic plant, an algae (Dunaliella salina). The algae is green but releases the carotene to protect the plant from the sun's rays. The pink coloration gets more intense as the lake dries out in the summer months. The phenomena occurs around the world where salty water occurs in very shallow lakes. During World War II, carotene was put in eggs to darken the yolk to make the eggs more attractive. It has also been used as dye to colour canaries pink."

Pangarinda Botanic Garden
Located over the river, and just off the B45, the Pangarinda Botanic Garden describes itself as "a real hidden gem of 30 ha of rare and threatened flora from Australia's drier regions. Planted and maintained by a dedicated group of native plant enthusiasts, it is a very valuable conservation and educational resource." It was created in 1993 after a public meeting which decided to turn "formerly weed infested, eroded sand drifts" into a garden for threatened plant species. The first plantings occurred in 2000 and every year since then local school children have continued planting. By 2010 about 12 ha had been planted. A very detailed and useful brochure can be downloaded at https://www.coorong.sa.gov.au/webdata/resources/files/Pangarinda%20Botanic%20Garden%20Brochure%20-%20June%202015.pdf.

Poltalloch Homestead
Located on Poltalloch Road, Narrung, near Meningie, Poltalloch Station was established in 1839 by Neill Malcolm who came to South Australia from Poltalloch Estate in Scotland. In the 1870s Poltalloch was purchased by John Bowman who had been in the area since he overlanded 2,000 sheep in 1839. The property has remained in the Bowman family since 1880. In 1974 it was opened for accommodation and tours. The Homestead was built in 1876. It is a beautiful Victorian mansion surrounded by a working farm which is essentially a sheep and cattle station. The outbuildings resemble a small village and include substantial stables, a coach house, barns, a woolshed and the overseer's accommodation. It is open for tours which take around 90 minutes and overnight accommodation in either the Station Hand's Cottage, the Overseer's Cottage, or the Boundary Rider's Cottage. Bookings are essential. Tel (08) 8574 0043 or check out http://poltalloch.com.au.

* Prior to European settlement the area around Wellington was home to the Ngarrindjeri people. They made bark and reed canoes and lived on the fish and the animals which came to the riverbank.

* The first European into the area was Captain Charles Sturt who, being assigned to solve the great mystery of why so many rivers flowed westward from the Great Dividing Range rowed a whale boat down the Murrumbidgee in late 1829 and reached the present site of Wellington, at the mouth of the Murray river, on 9 February, 1830.

* By the 1830s the whole area along the Murray was opened up particularly by overlanders who moved sheep and cattle across the land.

* By 1838 Wellington had become one of the most important settlements on the Murray. The ferry, which was established that year, and the town became the only point where traffic could cross the Murray.

* In 1840 a township was surveyed, most of it for John Morphett who had bought large tracts of land in the area.

* The town grew rapidly as a major transportation stopover point. It was the first stop for paddle steamers plying the Murray north of Goolwa.

* During the 1850s, Wellington became an important point on the gold run from the Victorian goldfields across to Adelaide. There were 18 shipments of gold in total.

* In 1861 a new Police Station and Court House were opened.

* When the bridge across the Murray was completed at Murray Bridge, Wellington declined in importance.

* In 1946 both the Court House and the Police Station were closed.

* In 1975 the Court House was established as a museum by the National Trust.

* In 2012 the museum was purchased from the National Trust and established as an accommodation destination.

* Today Wellington is an interesting stopover at the widest crossing of the Murray. It gives the traveller an appreciation of the importance of the river. 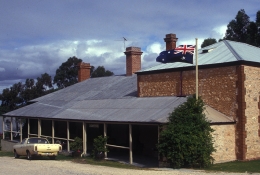 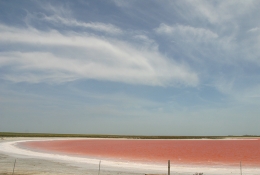 The Pink Lake outside Wellington 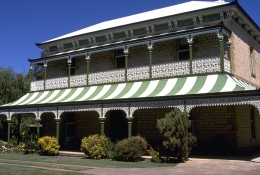