Significant railway town on the North West Slopes of NSW.

Many inland Australian towns owe their existence to the arrival of the railway. They were towns that sprung up because large numbers of railway navvies needed to be housed while the railways were being built. Mittagong, Moss Vale and Bowral all owe their existence to the building of the railway through the NSW Southern Highlands. But no town has a greater claim to be a pure railway than Werris Creek which came into existence when 500 railway workers descended on the area in 1877 to build the railway line from Murrurundi to Tamworth. The town's continuing existence was assured when it was decided that there would be a junction at Werris Creek and a branch line to Gunnedah. As a result Werris Creek is now a very proud and historic railway town with street signs shaped like railway signals; a huge and elegant railway station; an important railway museum; a monument to the workers who lost their lives on the railways; and an impressive collection of statues celebrating the railway workers.

The township of Werris Creek is located off the New England Highway 373 km north of Sydney, 44 km south-west of Tamworth, 19 km north of Quirindi and 384 m above sea-level.

It is believed that, although it sounds English, the town's name comes from a Kamilaroi Aboriginal word which, in the nineteenth century, was variously written as 'weia weia', 'werres', 'werries' and even 'weery's'. No one knows exactly what the word meant but it was used as early as 1841 as the name of a large local property.

There are a series of three-metre high stainless steel statues by artist Dominique Sutton which depict aspects of railway work. They are located in the railway station grounds and nearby park. In the park beside the main street is The Fettler with a description of his importance "laying and repairing tracks along the thousands of kilometres of railway lines in Australia". As you enter the railway station grounds there is the statue of the Gatekeeper - a job which predates automatic crossing facilities and which was usually done by women; the Flag Lady, the Shunter, the Fireman and the Signalman.

Railway workers from throughout Australia are honoured by a Path of Service  where each brick on the path records the name of a railway worker. There is a special plaque to Ben Chifley who, before becoming Prime Minister, was an Engineman with the NSW Government Railways from 1902-1928. The Australian Railway Monument is open seven days a week 10.00am to 4.00pm. Enquiries (02) 6768 7929.

Rail Journeys Museum and the Railway Station
The Rail Journeys Museum is located in the Werris Creek railway station which was designed and built by John Whitton, a noted railway engineer, as part of the Great North Railway. It is a huge and elegant building and a powerful reminder, particularly when the small Citylink train arrives, that there was a time when Werris Creek was a important railway hub. The station itself is huge with three linked two-storey buildings which are characterised by Victorian elegance. The station is the third largest in NSW.

The New South Wales Rail Heritage Unit has described it as "a remarkable building that could easily grace a city … yet, incongruously, a lonely citadel in the middle of the bush". The building is worth looking at very carefully as the refreshment room, now the museum, is constructed in the Victorian Free Classical style and built of red bricks in tuck-pointed Flemish bond with crisp stucco embellishments, pronounced cornices with paired brackets and moulded, grouped windows.

The building has a cedar staircase which used to lead to a floor of bedrooms for those travellers who had time to sleep between their connections. Amusingly Rail Heritage has observed the railway station was "not unlike a city bank … until it was covered in its first of many layers of soot".

The Rail Journeys Museum has exhibitions - electric staff instruments, memorabilia, miniature trains amongst other things - which tell the story of railways in Australia. It is open seven days a week from 10.00am to 4.00pm. Many of the volunteers are former railway workers eager to tell their stories. Enquiries (02) 6768 7929.

* For thousands of years prior to European settlement the Kamilaroi lived in the area.

* By the 1830s European squatters were in the district. Drovers and teamsters passed through the area on their way north and west and they stopped at a water hole near a crossing over Werris Creek.

* By 1841 the Reverend Francis Vidal was working a 13,000 ha property which he named Weia Weia Creek Station.

* Development of the district was slow. By the early 1870s there were still only 20 pastoral families and they were mostly grazing merino sheep. One of these graziers was John Single, after whom the main street is named, who owned the Summer Hill station to the east of the town.

* 1877 saw the town develop rapidly because of the arrival of 500 workers, all of whom needed to be housed, who were working on the railway line from Murrurundi to Tamworth which was part of the Great North Railway. The decision to build a branch line to Gunnedah saw the town become both an important rail junction and a railway maintenance centre. A post office was opened in 1877 and the railway was officially opened in 1878.

* 1888 - an extreme drought resulted in a number of local properties being sold and subsequently subdivided resulting in a change from sheep grazing to more dairying and wheat farming.

* In 1925 a coal mine started operating to provide the steam trains with fuel. It closed in 1963 when steam was replaced by diesel.

* In 1930 the completion of the North Coast Railway Line saw a decline in the rail traffic through the junction.

* In 1951 a major wheat storage terminal was built in the town. It was demolished in 1973 and rebuilt on the same site.

There is a local website with a small amount of information and advice concerning eating and accommodation. Check out http://www.visitquirindi.com.au/werris-creek/ 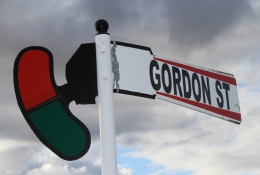 The street signs are all designed like railway signals. 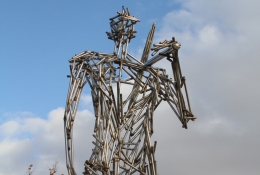 The Railway Fettler by Dominique Sutton in Junction Park on the main street of Werris Creek. 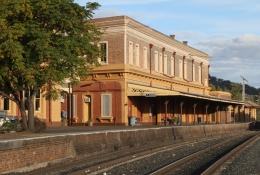 The railway station at Werris Creek. 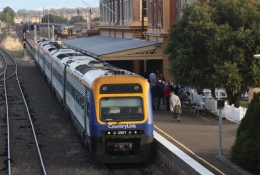 Waiting for the Country Link train at Werris Creek.