Most towns in rural Australia are laid out in a standard grid pattern. West Wyalong is one of the famous exceptions with its wonderfully meandering main street. The two towns of Wyalong and West Wyalong - now effectively joined - started as separate communities. Now they are part of a thriving rural centre servicing the surrounding farmland where wheat, wool, pigs, eucalyptus oil and sawmills all fuel the local economy.

West Wyalong is located 491 km west of Sydney (via Yass and Temora), 465 km via Bathurst and Cowra, and is 262 m above sea-level. It is located at the point where the Mid Western meets the Newell Highway.

West Wyalong is part of the greater Wiradjuri country which stretches across much of central NSW. The name Wyalong is thought to be a Wiradjuri word of unknown meaning.

Heritage Walk
The Heritage Walk, which takes around 45 minutes, looks at 33 historic buildings in the town. It is an easy way to enter into an experience of what West Wyalong must have been like around the turn of the century. You can download the Heritage Walk from http://blandshire.nsw.gov.au/sites/default/files/West%20Wyalong%20Heritage%20Walk.pdf.

Poppet Head
Located at the Cooinda Bushland Reserve on the road between West Wyalong and Wyalong, the True Blue Poppet Head is a replica of the 21-metre high poppet head at the True Blue Gold Mine. The mine was established in 1894 with a battery and treatment works which yielded 1426 oz (40.42 kg) of gold between 1894-1920. Nearby is a replica of a miner's hut and an unusual piece of sculpture - Hearts of Gold - by a local schoolgirl.

Bland Shire Art Trail
There is an excellent, and very comprehensive, Art Trail (it can be accessed by going to https://www.blandshire.nsw.gov.au/Visitor-Information/Things-to-See-and-Do and clicking on Bland Shire Art Trail) which covers a large number of interesting art works in the Shire including the Weethalle Silo art, Mirrool’s Horsing Around mural, the Big Football in Ungarie and nine murals and sculptures in West Wyalong including the Big Bull Mural at 192 Main Street and Chainsaw Tree Art in McCann Park.

Aboriginal Artefacts and Other Shops
Aboriginal Artefacts at 76 Main Street is a celebration of Wiradjuri culture. It sells hand-carved emu eggs, paintings, boomerangs and other indigenous artefacts. It is located at 76-78 Main St and open weekdays, tel: (02) 6972 3493.

Wyalong Courthouse and Wyalong's Public Buildings
The Wyalong Courthouse (now the museum) on Neeld Street was designed by the Government Architect, constructed of brick at a cost of £2000, completed in 1902 and was notable for its distinctive semicircular windows and a cupola and spire on top of a hipped roof. It remains in its original state with cedar furnishings. Over the road, also on Neeld Street, are Top Town Tavern (1894), the old post office (1901) , council chambers (1899), Soldiers Memorial and School of Arts building.

Manna Mountain
Manna Mountain is 58 km north-east of West Wyalong, just outside the village of Burcher and stands 438m above sea level. It  is an important site for the Wiradjuri people. There are good walking tracks beside rocks that have been cut into when the Wiradjuri used them to sharpen tools.

Lake Cowal
Lake Cowal, which is fed by the Bland, Barmedman, Duck and Back Creeks, is the largest natural lake in NSW covering 23, 300 ha and being about 25 km in length and 9 km across. The lake, which is shallow and can dry up during droughts, is an important waterfowl breeding ground. Bird lovers have identified 172 species around the lake.

* The district was originally inhabited by the Wiradjuri people whose lands spread across much of central NSW.

*the explorer John Oxley was the first European in the area. He travelled through in 1817 and, somewhat infamously, is credited with observing that 'from want of timber, grass and water, it will never be inhabited by civilised man'. He was wrong.

* In 1827 the colony's Surveyor-General, Thomas Mitchell, travelled through the region and painted a much more optimistic picture of its potential. By 1833 squatters were settling the district. The named the area 'The Blands', thus Bland Shire Council.

* The government laid out the town of Wyalong in 1894 but they were too late. The miners had created a settlement to the west which they called 'Main Camp'. It was the district's lifeblood because it had  'White Tank', the only reliable water supply. They were not going to move and so White Tank prospered while Wyalong quietly died. Not surprisingly local businesses moved to White Tank and so, in 1895, West Wyalong was laid out. The meandering nature of the main street follows the route of the original bullock track between the two camps.

* Wyalong became a municipality in 1899 when the council chambers were erected. Around the same time a courthouse, police station, post office and school of arts were added. There was fierce competition between the two towns which led to the amusing compromise of the railway line, which arrived from Temora in 1903, being located in the middle of mallee scrub between Wyalong and West Wyalong. The area became known as Wyalong Central.

* The introduction of cyanide processing which yielded more gold saw the old goldfield tailings reworked in the 1930s.

* Concurrent with the goldrush the large pastoral holdings in the district were broken up and mixed farming developed. This resulted in West Wyalong becoming the largest cereal-growing centre in NSW.

* Since the 1970s the two towns have effectively become one. Wyalong has grown towards West Wyalong. In 1994 a bicycle-pedestrian track was completed which linked the two towns.

A detailed accommodation and eating out guide is available at https://www.blandshire.nsw.gov.au/Visitor-Information which also provides a very detailed history of the local council. 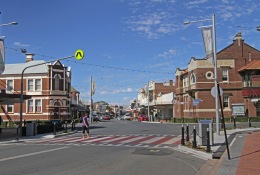 The winding main street of West Wyalong. This is Thom's Corner - the centre of the town. 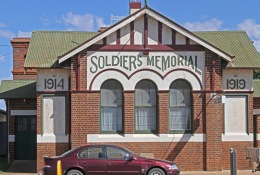 The Soldiers Memorial Hall at Wyalong a few kilometres from West Wyalong. 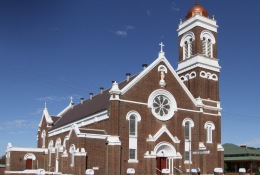 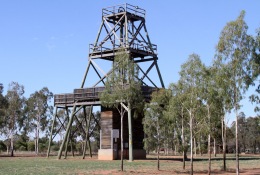 The poppet head of the True Blue Gold Mine