One of the elements that makes small English villages so captivating is the sense of surprise. You never know what you will see around a corner - a thatched cottage, a view across a river, a town square. Westbury, a little piece of England in Australia, is like that. Around a corner you will find a village green, tree-lined streets, old courtyards and stables, elegant inns and charming houses. It is a feast of Victorian and Georgian buildings. Not surprisingly it is a classified historic town where the visitor simply has to get out of their vehicle and start walking.

Westbury is located on the Bass Highway 35 km from Launceston and 215 km north of Hobart via the Midlands and Bass Highways.

Westbury is named after Westbury in the English county of Wiltshire just south of Bath.

The Village Green
It is claimed that the Westbury Village Green, with its elms, oaks and chestnut trees, is the only true village green in Australia. Certainly by the 1830s, with the soldiers garrisoned on the edge of the green, it was being used for parades and archery competitions. Prisoners were put in stocks on the green and it would have been the setting for village fairs, including the early St Patrick's Festival.

St Andrews Church
Opposite the Village Green is St Andrews Anglican church which was built between 1836 and 1890 - the foundation stone was laid in 1836, the nave was opened in 1842, the church was consecrated in 1851, the tower was added in 1859 and the chancel was completed in 1890. The church is noted for its fine carvings by noted woodcarver, Mrs Ellen Nora Payne, who was born and grew up in the village and who, in 1938 completed the magnificent 'Seven Sisters' chancel screen in memory of her seven dead sisters (she was the twelfth of fourteen children), and next year, such was her status, that she carved a coat of arms for Parliament House in Hobart. Next door is an attractive two storey brick house which was built in the 1840s and became the residence for Westbury Council clerks.

Fitzpatricks Inn
Located at 56 Meander Valley Highway, the charming two-storey Fitzpatricks Inn was opened in 1833 as the Commercial Hotel and operated for some years as a coaching inn. It was the first hotel in Westbury. In 1903 the Fitzpatrick family acquired it and renamed it Fitzpatricks Inn. It remained in the family through the twentieth century and, while it was being run by the three Fitzpatrick sisters (Cora 1891-1968, Genevieve 1896-1994 and Myra 1898-1981), had a reputation as a fine hotel. It is recognised as a fine example of a Georgian Inn although the classical portico was added in the early 1900s. Today it operates as a B&B, tel: (03) 6393 1153. Check out http://www.fitzpatricksinn.com.au. Outside there is an interesting historical silhouette/plaque of the three sisters which notes: "Conviviality was always the order of the day. Locals enjoyed a beer in the quaint English bar under Myra's watchful eye and famous artists and writers were inspired by its old world charm and lively conversations. Tasmania's social elite dined at a magnificent cedar table, laid with exquisite china, crystal and stirling silver."

John Peyton Jones
The silhoutte/placard celebrating the life of John Peyton Jones (1809-1891) depicts the man with a particularly ferocious dog because it was Jones, or Captain Jones as he was known, who arrived in Van Diemen's Land in 1829 with the 63rd Regiment, was stationed at Eaglehawk Neck from 1830-1832, who "devised the scheme of placing a chain line of savage dogs across the neck of the narrow isthmus to prevent prisoners escaping from Port Arthur to the north. This action secured him legendatry status within the convict era. Governor Franklin appointed Jones as Police Magistrate at Westbury in 1841 and he went on to play an important part in the township's early history."

Westbury Maze and Tea Rooms
Located at 10 Meander Valley Road, the Westbury Maze and Tea Rooms is a huge hedge maze with more than a kilometre of maze paths all edged by more than 3,000 two metre high bushes to challenge those who enjoy getting lost in a maze. There are tea rooms for those who successfully make it through the maze. It is open from 10.00 am - 6.00 pm from September to July, tel: (03) 6393 1840.

Pearn's Steam World
Pearn's Steam World is located at 65 Meander Valley Road,Westbury and has over 200 steam engines which have been collected since the 1950s. It is reputedly the largest collection of steam engines (trains, tractors, agricultural and industrial equipment) in Australia. It is open from 9.00 am - 4.30 pm except during the winter months (July, August, September) when it is open 10.00 am - 3.00 pm, tel: (03) 6393 1414. For more information check out http://www.pearnssteamworld.org.au which explains the genesis of the Steam world as "In the 1950’s, the Pearn brothers saw that the age of steam and threshing was giving way to tractors and self propelled headers. The last contracting job completed by the thresher was carried out in 1953. All machines used by the Pearns were kept in good working condition in sheds and when other farmers sold their machines for scrap the Pearns purchased sixteen more engines throughout the years. They decided to collect a representative sample of the steam engines operating in the state. They were already operating Marshall and Bulldog tractors on the farm and in the business. When other farmers and sawmillers sold their machines for scrap, the Pearn's purchased many of them for their collection Spare time was not used for recreational activities, instead it was used to polish and paint the engines. And so began the Pearns collection of steam traction engines and farm machinery, a hobby that involved all members of the family in recovering, restoring and operating the giants from the past and eventually creating the largest private collection of its kind in the Southern hemisphere."

* In 1828 Governor Arthur ordered that the streets be laid out. The plan was that Westbury would be developed by the Van Diemen's Land Company and become an important stopping point on the route from Hobart to the northwest coast which was being opened up by the company. The plans were so grandiose that it was obviously Arthur planned for Westbury to grow into a city.

* In 1832 Lieutenant Ball and a detachment of troops arrived and were stationed on the edge of the Village Green. That same year a post office was opened.

* By 1836 the town's population comprised 227 free men and women and 317 convicts. This settlement grew so that by the mid-1850s the town had become the largest military barracks outside Hobart and Launceston. The population was dominated by Irish emigres - convicts, settlers and military personnel.

* Today Westbury is a town with a nineteenth century ambience.

The official local site, run by the Meander Valley Council, can be found at http://www.greatwesterntiers.net.au/villages/westbury 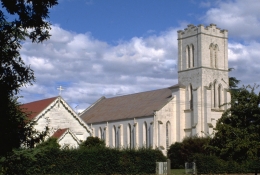 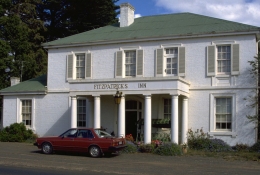 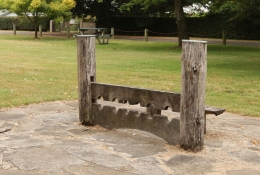 The old stocks on the Village Green at Westbury 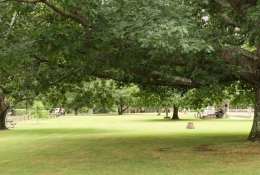 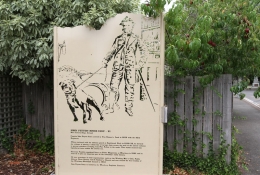 Strategically placed around the town are silhouette/placards with stories and images of local identities. This is of John Peyton Jones. 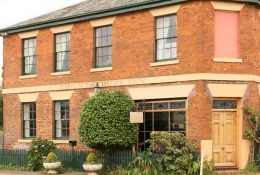 The Clancy Hotel (circa 1854) - a building with a fascinating history.