Historic goldmining town which has recently experienced a remarkable makeover.

It is hard to imagine a more unusual town than Westonia. Although it did not come into existence until 1910 it actually looks like a town from that period which was built last week ... which is basically what it is. As a result of the "Wolfram Street Facades" project, facades representing the town's original bank, cafe, hotel, fire station, boarding house and green grocer's store have been constructed in the style of the early 1900s. It would be easy to see this as a kind of Historic Disneyland but the town is an operational modern entity with a 1915s pub and an exceptional museum. It represents the eastern limit of the wheatbelt before the traveller enters the Goldfields. Its origins are more connected to the fortunes of the Goldfields than they are to those of the wheatbelt. It is worth visiting because there is no other town in Australia which is fully functional and also looks like a remarkable movie set.

Westonia is located 311 km east of Perth via the Great Eastern Highway and 357 m above sea level.

The town was originally named Weston after Alfred David Weston who discovered gold at Boodalin Soak in December, 1910. It was changed to Westonia in June, 1914.

St Lukes Anglican Church
This modest weatherboard church has an incredibly colourful history. It was originally built in 1916 as a church and meeting hall by the Reverend Joseph Budge at Naretha. Naretha was a railway siding near Cocklebiddy on the edge of the Nullarbor Plain. At the time it was a camp for the workers who were building what became known as the Indian Pacific railway line. When the railway moved on and the workers left, the church was dismantled and moved to Kalgoorlie. Shortly afterward the Bishop of Kalgoorlie, Dr Cyril Golding-Bird, discovering that Westonia had no church and that services were being held in the local school, decided the church should be moved and so, in October 1918, a church which had been built over 600 km away was consecrated at the end of Westonia's main street.

Wolfram Street Facades
The Shire of Westonia brochure explains: "The Wolfram Street Facades project involves the construction of all new buildings in Westonia's town's centre in a 1920's historic style as well as the restoration and maintenance of all existing historic buildings in the town. The facades of the town's original bank, cafe, hotel, fire station, boarding house and green grocer store have also been replicated and front new buildings constructed in Westonia." This, combined with the upgrading of Wolfram Street, and the excellent redesign of the median strip gardens (they now include both a new mine shaft, a number of palm trees, and a stamper battery), has given Westonia a remarkable, modern yet historic, feel. It is an impressive and unique project designed to preserve the heritage of the town.

The Hood-Penn Museum Project
This project (access is via the Shire of Westonia offices in Wolfram Street) was officially opened on 22 March, 2014. Apart from contributions from the Department of Infrastructure, Transport, Regional Development and Local Government there was also assistance from architects, mine tunnel designers, builders, Evolution Mining and the Westonia Progress Association. The end result is a fine example of a 21st century museum where money has been spent intelligently and creatively. The two most obvious examples of money well spent are the models in the displays which actually look like real human beings rather than store bought dummies and the hugely entertaining mining experience where visitors enter a darkened mine, listen to the chatting of two miners and experience the sensation of a vibrating mine tunnel as a section of the wall is blown up. The room shakes dramatically. There are fine displays of historic bottles in a hotel bar; a 1920s-era bedroom with a woman brushing her hair; a rural business centre; a blacksmith's shop and a 1920s kitchen. The setting is a huge shed which adjoins the Shire of Westonia offices. It is open from 9.00 am - 4.30 pm Monday to Friday.

Woodlands and Wildflowers Heritage Walk Trail
This pleasant 4 km walking trail starts outside the entrance to the Caravan Park and passes through the woodlands around the town. It is well worth undertaking because the trees in this area of Western Australia are particularly beautiful and in the spring the area is covered with wildflowers. The Shire has a brochure - Woodlands and Wildflowers Heritage Walk Trail - with a map which includes such amusing names as "Lichen Lookout", "Melodious Melaleuca" and "Eyes for the Echidna" and a useful guide to the trees, birdlife and wildflowers which can be seen on the walk.

Edna May Gold Mine Lookout
The Edna May Gold Mine is now a huge open cut operation run by Evolution Mining Ltd. It is only two kilometre out of town and the lookout offers a fine view over the entire operation. There is a detailed history of the mining operation at http://www.westonia.wa.gov.au/Assets/Documents/content/Places-to-visit/Edna_May_Westonia_Merredin_websites_F1.pdf. The mine currently employs 180 people and is expected to continue operations until at least 2019.

Yanneymooning Hill Reserve - Located 75 km north of Westonia it is known for its flora and birdlife with Patricia's Spider Orchid and the eucalyptus garden species 'Silver Princess' in evidence on the rock.

Chiddarcooping Reserve - Located 50 km north of Westonia it is known for its rocky outcrops, its rare native bottlebrush species and the Cowslip Orchid.

Boodalin Soak - Located 6 km west of the town it is historically significant because C.C. Hunt established one of his line of wells at this location and the well, built by convicts, can still be seen. For those who have read the entry on Toodyay - https://www.aussietowns.com.au/town/toodyay-wa - it was here that Moondyne Joe was recaptured after his attempt to walk to the eastern states.

Elachbutting Rock - Located 100 km north of Westonia, this 466 ha reserve includes an unusual rock formation which looks like the famous Wave Rock. It is also home to a wide range of bird life and, in springtime, it is alive with wildflowers.

Baladjie Rock - Located 42 km north-east of Westonia, this dramatic rock offers fine views across the surrounding countryside. It is also the home of the Ornate Dragon Lizard.

Sandford Rocks Nature Reserve - Located 10 km north-east of Westonia, this reserve is 806 ha of granite outcrops, pools and bushland. There is a 1 km walking trail. The brochure is available from the Westonia Shire Offices.

Burracoppin and the Rabbit Proof Fence
Located 29 km west of Westonia is the tiny settlement of Burracoppin where, in the 1920s, the novelist Arthur Upfield (famous for his 'Boney' detective stories) worked clearing scrub. He saw it as 'a replica of five hundred Australian wheat towns'.

Along the Great Eastern Highway to the west of Bencoppin is a sign recording the historic No.1 Rabbit Proof Fence (recently made famous by the 2002 film Rabbit-Proof Fence). Also known as the State Vermin Fence, the Emu Fence and the State Barrier Fence, this 1,833 km long fence was constructed between 1901-1907 to try and control the ever-growing numbers of rabbits. Burracoppin was where the No.1 Rabbit Proof Fence was started in 1901 and all measurements of the fence, which eventually ran from Esperance to Port Hedland, were taken from the town. It is possible to see remnants of the fence.

The connection between Arthur Upfield and the Rabbit Proof Fence is fascinating. Upfield wrote a story, The Sands of Windee, about a murder in the desert which involved an ingenious way of disposing of a body - the perfect crime. A few years later a stockman who knew Upfield, a man named Snowy Rowles, killed two men and disposed of their bodies by the method suggested by Upfield. Foolishly he murdered a third man, failed to adopt Upfield's perfect technique, was caught, and hanged in 1931. The whole extraordinary story is recounted in a book by Terry Walker titled Murder on the Rabbit Proof Fence: The Strange Case of Arthur Upfield and Snowy Rowles.

* Prior to European settlement the area around Westonia was inhabited by the Kalaamaya Noongar Aboriginal language group.

*  Westonia came into existence in 1910 when gold was discovered in December of that year by a sandalwood cutter-gold prospector named Alfred David Weston at the Boodalin soak 3 km west of the present town.

* Three months after Weston's application for a gold lease, Edmund J. Annear applied for a lease to a mine he named after his daughter, Edna May.

* By 1915 there were two major mining companies in the area. In February the Edna May Hotel, now the Westonia Tavern, opened for business.

* In 1916 the Westonia Road Board had been established.

* By 1917 the thriving township of Westonia had a population of 2,000. The mining was inevitably tied to the gold price and the ease of extraction.

* In 1922 the Edna May mine closed down due to problems with underground water.

* By the 1920s the area surrounding the town had become successful wheat and sheep growing land and settlers had moved into the district.

* A labour shortage and more problems with water saw the mine closed in 1948.

* In 2010 the first gold from the Edna May mine in its fourth manifestation (under Evolution Mining) was poured.

There is a useful local website - http://www.westonia.wa.gov.au/ - which provides information about the town and the surrounding shire. 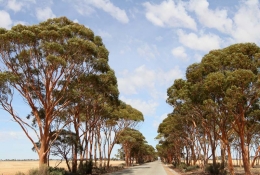 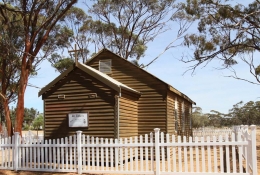 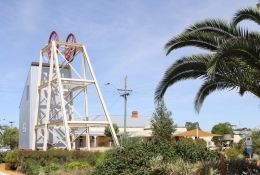 A modern model of an historic mine shaft in Wolfram Street. 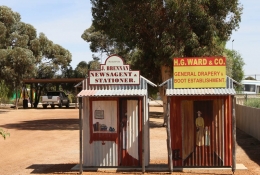 Corrugated iron models of the town Newsagent and Drapery in Wolfram Street. 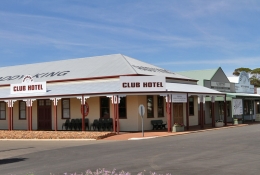 The Club Hotel facade in the main street of Westonia. Behind the facade is the Westonia Hood-Penn Collection. 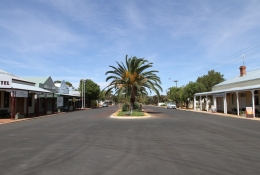 The main street of Westonia with the Westonia Tavern and Club Hotel. 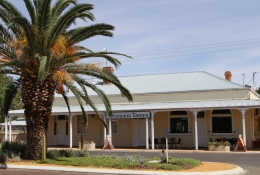 The Westonia Tavern, a rarity, a pub dating from 1915. 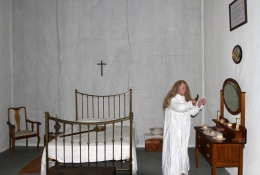 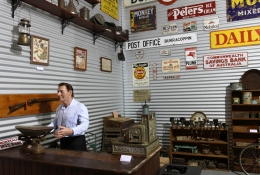 A shop assistant surrounded by local memorabilia in the Westonia Hood-Penn Museum. 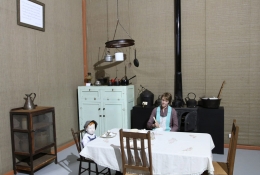 A recreation of a wheatbelt kitchen circa 1920 in the Westonia Hood-Penn Museum. 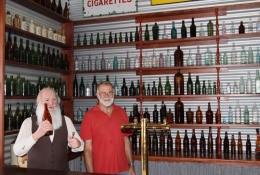 Arnold, my guide through the Hood-Penn Museum collection, stands beside a very realistic model of a publican in the Club Hotel bar. 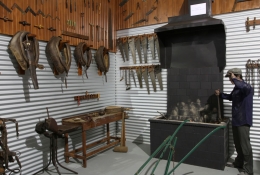 The smith's forge and shop circa 1920 in the Westonia Hood-Penn Museum.