Location of the first major mineral mine in the Pilbara, now only a pub.

Whim Creek is nothing more than a rather splendid, late 19th century pub located just off the North West Coastal Highway between Roebourne and Port Hedland.

Whim Creek is located 1641 km north of Perth via Carnarvon and Karratha and 1685 km via Newman.

Whim Creek Pub
The solitary attraction at Whim Creek is the pub which was built in 1886 to cater for local miners. Today it is a popular, and cool, retreat for travellers wanting a break on the journey from Karratha to Port Hedland. Look carefully, the hotel was made in the UK and shipped out to the Pilbara where it was constructed.

Balla Balla Fishing Spot
Balla Balla was created as a port for the copper mined at Whim Creek and it operated for some years - particularly between 1895-1900 - until it was destroyed by a cyclone. It was gazetted as a town in 1898 and at its height supported two hotels, a blacksmith, a police station, and a Post and Telegraph office. There was also a 20 km single rail track from Whim Creek to Balla Balla. Today it is no longer a town or a port but a very popular location for anglers. Check out the details and the route (it is all dirt road) at the Whim Creek Hotel.

Mines
There are copper, gold and iron ore mines in the district but none are open for inspection and they are all low level activities which are vulnerable to sudden changes in the price of the metals they extract.

* Prior to the arrival of Europeans, the area was home to the Ngarluma and Yindjibarndi Aboriginal people.

* The first major mineral discovery in the Pilbara was made west of Whim Creek when copper was discovered in 1872.

* By the late 1870s copper from Whim Creek was being mined and exported to the United Kingdom through the tiny port of Balla Balla. The town, with a population of 400, was known at the time as Whim Well. At the time it had two pubs, a post office, a bakery and police station.

* The Whim Creek Hotel was built in 1886. It was particularly popular with the German copper miners who came to the area.

* Gold was discovered 20 km north of the town in 1887. Around this time copper was also discovered.

* In 1888 the township of Balla Balla was formally gazetted.

* The hotel was destroyed by a cyclone but rebuilt in the early 1900s using steel imported from England. The frame has resisted every cyclone to hit the area.

* In 1914, with the outbreak of war, the German miners working in the copper mine were all interned.

* The jetty at Balla Balla was used to ship copper until the 1930s.

* A cyclone in 1956 destroyed the Balla Balla jetty.

* In 2011 the hotel was bought by Vendurex Resources, who were operating Whim Creek Copper Mine. They closed it in 2011.

* In 2014 Whim Creek Hotel was purchased by two Aboriginal corporations - The Ngarluma Yindjibarndi Foundation Limited and the Ngarluma Aboriginal Corporation - for $1.7 million. 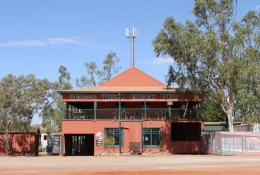