Whitfield is a small rural service centre which was historically surrounded by a dairying and tobacco growing district in the scenic King River Valley where lush river flats lie beneath magnificent high country. Today wine is the main produce of the valley, along with gourmet foods, apples and berries. In recent times it has become a popular destination for holiday makers, anglers, white water kayakers and bushwalkers.

Whitfield is located 252 km north-east of Melbourne via Yea and 283 km via the Hume Highway. It is 47 km south of Wangaratta.

The name Whitfield probably came from the name of a pastoral run which was called Whitefields. Whitefields was taken up by a William Clarke in 1845. The most likely British origin of the name was seasonal white ground-cover flowers, hence Whitefields.

Newton's Organic Prickleberry Farm
Located at 118 Gentle Annie Lane (just past the Caravan Park), Newton's Organic Prickleberry Farm sells frozen berries and berry jams all year round and fresh berries (particularly blackberries) can be picked from November to April. There are no set opening hours but if the sign is out the front they are open for business. If you are making a special trip it is best to ring first, tel: (03) 5729 8272 or 0427 298 278. Check out http://kingvalley.org.au/2018/10/01/newtons-organic-pickleberry-farm/ for details.

Lake William Hovell
Located 23 km south of Whitfield on the Upper King Valley Road, Lake William Hovell is the main reservoir for the valley. This beautiful high-country recreation area has full barbecue facilities, fishing opportunities and walking areas. It is also ideal for canoeing and 4WD. The lake contains trout, redfin and some Macquarie perch. Restrictions on the lake include boats which are restricted to 8 kph and 10 horsepower; no camping; and the Macquarie perch are protected. Check https://www.victoriashighcountry.com.au/listing/lake-william-hovell/ for additional information.

Paradise Falls
Paradise Falls are located 18 km south of Whitfield via Cheshunt, King Valley Road and Paradise Falls Road. They are located in the Wabonga Plateau - Mount Cobbler section of the Alpine National Park. The falls drop for 31 metres and an overhanging rock face allows walking behind the falls. It is usually very quiet and peaceful and the walk from the car park is down a 500 metre path. Peregrine falcons nest in the area. It is important to note that the falls can dry up in summer. The route is clearly signposted. Ring Parks Victoria on (03) 5729 8266 or download https://parkweb.vic.gov.au/__data/assets/pdf_file/0009/678069/Alpine-National-Park-Razorback-Ridge.pdf for further information.

Power's Lookout
Located 22 km south-west of Whitfield, via Whitlands, Power's Lookout, which was first reserved as early as 1886, is a panoramic viewing point on the Wabonga Plateau above King Valley. There are two lookout points offering superb views across scenic high country, there is a walk to Power's Waterhole, and there is a picnic area with facilities. Lookout 1 is 190 metres from the car park and offers views from a rock-top platform. It passes huge boulders made from silt and pebbles some 350 million years ago. Lookout 2 has views across King River Valley towards Mount Buffalo, Mount Feathertop and the Victorian Alps. The walk to Power's Waterhole is 25 minutes return. The waterhole was used by Power as his personal drinking supply.
The lookout was named because it was once a vantage point for bushranger Harry Power. A 15-year-old Ned Kelly was charged as being an accomplice of Power in 1870, but the charges were dismissed for want of evidence.
When he was finally captured Power told a fellow inmate of his love for the area: "Yer was never there sir, you say; well I hope you'll go some day. It's there ye'll see the finest sights in the world ay! It's grand to be on the ranges, and to breathe beautiful pure air, and to see Mount Feathertop far above ye, and down below, for miles and miles, the beautiful country. There's water all year round, and it's always cool and pleasant. That's the place for a man to live!"

The Harry Power Story
Bushranger Henry ‘Harry’ Power operated in the King Valley area of Victoria in the 1860s. He was known as a "gentlemanly" bushranger and, as a result of his non-violent thieving ways, he died an old man having spent most of his life in goal.
Power had been born in Waterford, Ireland in 1820. He was sentenced to seven years transportation for stealing a pair of shoes and reached Van Diemen's Land in 1842. By 1855 he was in Victoria where he was arrested for horse theft (he was probably innocent) and wounding a policeman. He was sentenced to thirteen years but escaped in 1862.
While Power was in gaol he met Ned Kelly's two uncles, Thomas and John Lloyd, who were serving five years for cattle theft.
Power worked for a time, as a horse thief, with the Kelly and Lloyd families but was arrested again in February, 1864 and sentenced to work on the roads for seven years.
He escaped again from Pentridge Gaol in 1869 and travelled to King Valley where he met John and James Quinn.
Power remained at large, "working" as a bushranger, for sixteen months. During that time, he formed an association with a 13-year-old Ned Kelly. As a result Kelly was arrested and held in custody for seven weeks as a suspected accomplice but the charge was dismissed. Power claimed that he committed over 600 robberies in the 16 months.
The Quinn family home was on Glenmore Station - it was the home of Ned Kelly's grandparents - and Power set himself up at Power's Lookout above the property. The Quinns knew of his whereabouts but Power paid them and they kept quiet until the Victorian government offered first £200, and then £500, for his capture
When the reward for Power was raised to £500 James Quinn told the police (oh, yes, and he did receive the £500). Power was convinced that he had been dobbed in/grassed up my Ned Kelly.
Although Power was a superb and elusive bushman he was captured because of bad weather. On the morning of 5 June, 1870, while he slept, the police - Superintendents Nicolson and Hare with Sergeant Montford and a black tracker – arrived at Power’s Lookout and because it was wet and stormy, Power did not hear the dogs, or the very noisy peacock, which lived with the Quinns in the valley below.
The police party had travelled all night. They were hungry and, to add insult to incarceration, they helped themselves to Power's well stocked larder and had a hearty breakfast before taking Power to Wangaratta. He was subsequently sentenced at Beechworth to fifteen years hard labour on three counts of bushranging. He died in 1891 having drowned in the Murray River near Swan Hill.
The Australian Dictionary of Biography sums up his remarkable life: “Power was a fearless and daring rider and bushman, but never killed police or his victims. He broke from prison several times, defied the police in the Ovens District for a decade and was finally convicted through an informer.

* Prior to the arrival of Europeans the area was home to the Waveroo Aboriginal people.

* Pastoral runs had been established in the area by the 1840s.

* In 1860 the bushranger 'Mad Dog' Morgan stole a horse from Evans Station near Whitfield.

* In the 1860s the bushranger, Harry Powers, was operating in the area.

* Power was captured in 1870 and sentenced to 15 years at Pentridge prison.

* The population of the region began to grow in the 1870s.

* By 1910 the Government had built an experimental farm and was growing hops and tobacco.

* After 1945 tobacco was grown in the area by Italian, Yugoslav and Spanish migrant farmers.

* In King Valley, ten kilometres north of Whitfield, 82% of the farms were owned by Italians in 1978.

* The town's General Store was destroyed by fire in 2013.

* In recent times Brown Brothers, Milawa, have expanded their vineyards to King Valley and Whitlands.

* Today tobacco is no longer grown and the farmers have diversified into chestnuts, hops, berries, timber-veneer trees and grazing.

Monash University has a good overview of the town and its history. Check out http://web.archive.org/web/20040511091748/www.arts.monash.edu.au/ncas/multimedia/gazetteer/list/whitefield.html. The King Valley website is useful - check out https://www.visitkingvalley.com.au/listing/whitfield. 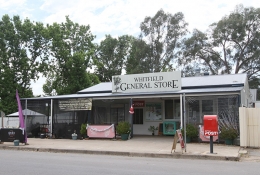 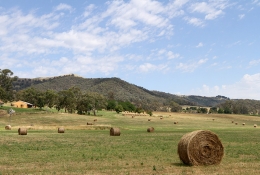 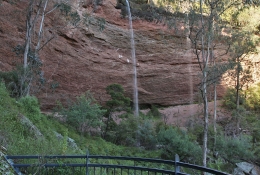 Paradise Falls can be little more than a trickle in summer 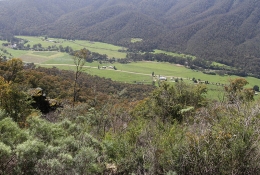 The view of King River Valley from Power’s Lookout