A collection of 74 islands off Airlie Beach with resorts on Hamilton, Hayman and Daydream Islands.

The Whitsunday Region extends from north of Mackay to Bowen and encompasses 23,862 square kilometres of land with the main land-based centres being Mackay, Airlie Beach and Bowen. It also includes the coal mining town of Collinsville.
In geographic terms "Whitsunday" and "Whitsunday Islands" encompass the large 'town' of Whitsunday (which includes the mainland settlements of Airlie Beach, Cannonvale and Shute Harbour) and the Whitsunday Islands which include 74 islands off the Central Queensland coast of which the most islands with resorts and regular transport from the mainland are Daydream Island, Hamilton Island and Hayman Island.
Geologically the Whitsunday Islands are all drowned mountains. Prior to the last Ice Age they were connected to the mainland and would have all been prominent mountains in the area. The melting of the polar caps drowned the valleys between the mountains creating a network of 74 islands of which only 7 have resort facilities. Beyond the resorts the whole area is part of the Great Barrier Reef Marine Park and the uninhabited islands are all controlled by National Parks and Wildlife.
The Whitsundays are a combination of the attractions of Tropical Queensland. There is easy access to the Great Barrier Reef; the balmy warmth of the tropics means the water is always warm; the resorts and Airlie Beach offer an extensive range of activities from bushwalking to scuba diving; and the region caters for a diversity of lifestyles from backpackers and takeaways to luxury hotels and international a la carte restaurants.

The area was named by Captain James Cook on 4 June, 1770 when he passed through Whitsunday passage, a narrow channel which lies between the mainland coast, South Molle and Daydream Islands to the west and Dent, Whitsunday, Hook and Hayman Islands to the east. Sunday 4 June was Whit Sunday (the seventh Sunday after easter) - hence the name. It was actually Monday 5 June because dates were not corrected by the International Date Line at the time.

Whitehaven Beach on Whitsunday Island
The winner of seemingly endless “Best Beach in Australia” awards, Whitehaven is one of those magical places where the pristine silica sands are wonderfully white and the crystal clear water looks like it has been specially cleaned and coloured just for the visiting tourists. The beach is seven kilometres long, is considered the “most photographed” beach in Australia, and was named the “world’s top eco-friendly beach” by the CNN television network. Whitehaven is everyone’s image of what a perfect tropical beach should be. Impossibly white, clean, glowing and unforgettable. It is accessible from both Hamilton Island and Airlie Maritime Terminal. Check out https://www.cruisewhitsundays.com for more details.

Exploring the Uninhabited Islands
It is possible to visit the many uninhabited islands in the Whitsunday group by charter boat, private boat of water taxi. However it is necessary to obtain camping permits from the National Parks Office if you are intending to stay the night. Many of the smaller islands have no paths or tracks and exploration is often restricted to walking around the lonely beaches and rocky points. The largest island in the group, Whitsunday, has a walking track which connects Sawmill Beach with Dugong Beach. There is a downloadable map at https://www.npsr.qld.gov.au/parks/whitsunday-ngaro-sea-trail/pdf/cairn-dugong-peak-map.pdf. Sawmill Beach was named after the sawmill which was established on the island at the end of the nineteenth century. For some years there was an active timber industry on the island and it is still possible to see the remains of the sawmill. Check out https://www.npsr.qld.gov.au/parks/whitsunday-islands/about.html for more detailed information.

Cruises from Airlie Beach
Cruise Whitsunday, which operate from Airlie Maritime Terminal, offer a range of cruises around the Whitsundays including day and half day cruises to Whitehaven Beach (with stops at Daydream Island and Hamilton Island) and full day Great Barrier Reef Adventures. For more details check out https://www.cruisewhitsundays.com.

The Islands
There are 74 islands in the group but only three islands have resorts. The resort islands are covered individually. For more information click on the appropriate link below.
* Daydream Island
* Hamilton Island
* Hayman Island

* Prior to the arrival of Europeans the area was home to the Ngaro and Gia Aboriginal people from the Biri and Giya language groups.

* The first European to explore the area was Captain James Cook who travelled through the area on his journey up the eastern coast of Australia in 1770. He passed through Whitsunday passage, a narrow channel which lies between the mainland coast, South Molle and Daydream Islands to the west and Dent, Whitsunday, Hook and Hayman Islands to the east, on Sunday 4 June which happened to be Whit Sunday (the seventh Sunday after Easter) - hence the name of the area.

* Created in 1987 as a 'town' it now combines Airlie Beach, Cannonvale, Jubilee Pocket and Shute Harbour.

* In 1989 the Whitsunday Tourism Association was proudly boasting that "the Whitsundays has blossomed into the largest tourism development region in the world with $3 billion being invested here within the next ten years".

* In 1933 a resort was built on Daydream Island by retired army major Paddy Murray and his wife.

* In 1935 the Queensland Lands Department offered land beside Airlie Beach for sale.

* In 1947 the island was purchased by Sir Reginald Ansett. He operated the resort until 1953.

* Hayman Island was chosen in the 1940s by Sir Reginald Ansett as an ideal destination.

* By April 1977 Williams and Byrt had applied to the Queensland Government to build a tourist resort on Hamilton Island.

* In 1979 Keith Williams acquired the lease over the island and applied to the Queensland Cabinet to build “three tourist hotels, 300 condominium or cluster development sites, an airstrip, a lake to be at constant level fed through a valve system from adjoining tidal waters, an oceanarium, a cyclone-proof boat harbour and sporting and recreational facilities.”

* Hamilton Island resort officially opened in 1984 with Peter Allen as the star attraction.

* The area became known as the town of Whitsunday in 1987.

* The current Hayman Island 5-star hotel was built by Sir Peter Abeles and opened in 1987.

* In recent years a number of resorts have closed or have been purchased with a view to upgrading. Today (2016-2017) the only resorts open for bookings are at Hayman, Hamilton and Daydream Islands. 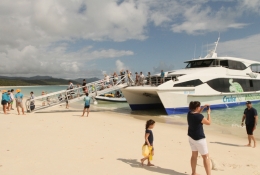 The cruise boat from Daydream and Hamilton Islands arrives at Whitehaven Beach. 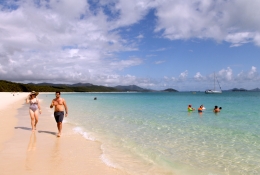 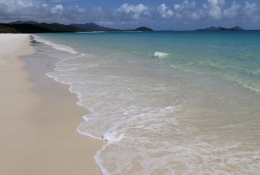 The whiteness of Whitehaven Beach 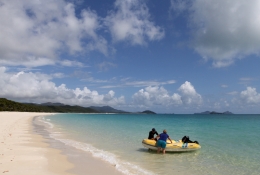 Launching a boat on Whitehaven Beach to go out to the waiting yacht.