Wheatbelt town famous for its connections with A.B. Facey and "A Fortunate Life"

Wickepin is a typical Western Australian wheatbelt town with grain silos, a railway line and bulk loading facilities. There are two good reasons to visit Wickepin: it is an opportunity to see A.B. Facey's home and to learn what life was like on the wheatbelt during the Great Depression and it is an excellent opportunity, in the spring, to experience the miracle that is the wheatbelt wildflowers.

Wickepin is located 210 km south east of Perth via Brockton and Pingelly.

When the town was gazetted in June, 1908 the Surveyor-General, H F Johnston, decided it should be named Wickepin probably because land in the area had been declared the Wickepin Agricultural Area in 1891. Wickepin was an Aboriginal name which had been first recorded for a local spring by a surveyor in 1881.

A.B. Facey’s House
Albert Facey's house was moved from its original location on a farm at Nomans Lake into the main street of Wickepin in 2000.  It was formally reopened and staffed by volunteers in October that year. The house is open for inspection from 10.00 am - 4.00 pm seven days a week from March to November and, in the summer months (December, January and February) it is only open on Friday, Saturday and Sunday from 10.00 am - 4.00 pm. This is the house that Facey walked out of in 1934 during the Great Depression. The fascination of the building, apart from its connection with the literary history of the area, is that nearly all the rooms have the original Facey furniture in them. The house is much more than just another wheatbelt dwelling. It is a unique opportunity to view the harsh and simple lifestyle of the small wheatbelt farmer in the early 1930s. Tel: (08) 9888 1005 or check https://www.australiasgoldenoutback.com/business/attractions/albert-facey-homestead.

The Story of Albert Facey and his book, A Fortunate Life
If you did not live in Australia through the 1980s you cannot understand just how important A.B. Facey's A Fortunate Life was. It became one of the defining Australian books because, in its title, is pure Aussie optimism and in its pages is the story of a person who was savagely mistreated firstly by the harsh reality of growing up poor and working for a vicious boss, then by the ugliness of World War I and finally by the Great Depression which in 1934 forced Facey, a returned soldier who was provided with land under the Soldier Settlement Scheme, off the land.
The success of Facey’s autobiography A Fortunate Life is one of the remarkable events of Australian publishing. Originally published by the Western Australian-based Fremantle Arts Press in 1981, the book was subsequently published by Penguin and  sold over 250,000 copies. It was subsequently made into both a play and a successful TV mini-series.
Facey was born in Victoria but grew up on the Coolgardie and Kalgoorlie goldfields. After his father’s death the family moved to the area around Wickepin. It is this area which he describes so vividly in his book.
In 1985 Angus & Robertson published The Australian Collection: Australia’s Greatest Books by Geoffrey Dutton. Dutton included Facey’s A Fortunate Life and wrote of it:
“Albert Facey’s A Fortunate Life is an outstanding example of how difficult simplicity is to achieve in literature, and how rewarding simplicity is when it has been achieved. Facey has an extraordinary story to tell, but he treats it with the cool detachment of a born writer, although he had no education and had to teach himself to read and write. A Fortunate Life also demonstrates the delicate balance that exists between literature and emotion. The terrible events of Facey’s childhood would not have made their impact in the telling if not for the calm simplicity with which they are told … one might expect that a man who had endured so much and could still call his autobiography, A Fortunate Life, would be hiding his wounds under a mask of toughness or sardonic humour, and that would be a very Australian way of handling it. But Facey, who is redoubtably Australian, has no qualms about admitting his feelings. He frequently admits fear, and he is not afraid of telling us that he burst into tears … At nine Bert has to go to work leaving Grandma and his other relatives at a farm at Cave Rock some 50 kilometres away. Uncle, who has recommended the move, does not know that these people are cattle thieves who have been in gaol; they are drunkards and layabouts. Bert is nearly killed by one of the men who whips him with a stockwhip; his life is saved by a neighbour who has been a nurse. When he recovers his strength he makes himself boots out of wheat bags and walks home. Bert not only has to suffer this physical assault but to endure, with these and other people, the humiliation of not being paid for his work. He says that by the age of 12, “My experience up to now made me doubt the word of everyone.””

A.B. Facey’s Heritage Trail
Available at Albert Facey Homestead, the Albert Facey Heritage Trail brochure covers a distance of 86 km which includes the Wickepin Boarding House where Facey stayed in 1912 while working for the Western Australian Water Supply; the Wickepin Hotel; and Archie McCall’s Farm where Facey lived before being sent out to Cave Rock to work when he was only eight years old. The trail also covers the history of the area and includes Tarling Well, Tarling Hall and the Inkiepinkie School. As well it includes the Meikles Farm, the Phillips Farm, Moran’s Farm and the Bibby’s Farm. These were all places where Facey worked.

Lake Yealering
Located 30 km north of Wickepin, Lake Yealering, which covers 160 ha, is primarily a site for watching water birds notably black swans. It is also an ideal place for a picnic or for swimming, boating and windsurfing. There are also pleasant, easy trails around the lake. In spring the wildflowers in the area, like so much of the wheatbelt are spectacular.

* Settlement in the area was slow. Inevitably the area saw the sandalwood cutters and shepherds move through it but few were interested in settling permanently.

* It is likely that the first settler was an ex-convict, William Justin Smith, who took up land east of Harrismith in 1868.

* Wickepin came into existence as a result of the construction of the Great Southern Railway line which joined Perth and Albany in 1889.

* Wickepin started as a watering point named Yarling. The area was opened up for settlement in 1893.

* By 1906 a tiny settlement was starting to develop.

* Land lots were surveyed in 1908. The town was gazetted in that year.

* The Wickepin District Road Board was established in 1909.

* The arrival of a branch line from the Great Southern Railway in 1909 resulted in the building of a police station and the establishment of a Road Board.

* The first school was opened in 1911. A Court House and Lock Up were also built that year.

* The rail was connected between Wickepin and Corrigin in 1914.

* The town's first agricultural show was held in 1917.

* In 1934 Facey was forced to walk off his land due to the Great Depression.

* The Yarling Brook sheep stud was established in the 1940s.

* In 1964 electricity and water were connected to the town.

* Facey’s autobiography A Fortunate Life was published in 1981.

The local shire website has useful information. Check out https://www.wickepin.wa.gov.au/explore/attractions.aspx. 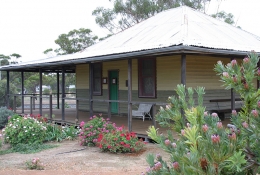 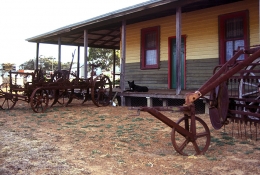 The A.B. Facey homestead, in its original location at Noman’s Lake south of Wickepin in 1988 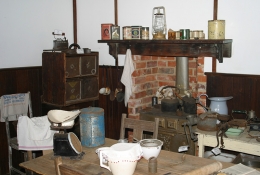 The kitchen in A.B. Facey’s house