Of all the small towns along the Hawkesbury between Windsor and Wisemans Ferry, Wilberforce seems, to the hasty traveller, to be the least interesting. This is a false impression produced by the fact that the township has spread across the Hawkesbury flood plain and modern suburbia has conspired to hide some of the town's historic buildings. There are a number of genuinely interesting historic buildings and nearby is the remarkably rich Australiana Pioneer Village and historic Rose Cottage which dates from 1811.

Wilberforce is located 61 km north east of Sydney via the M2. It is only 6 km from Windsor on the northern side of the Hawkesbury River.

In 1810 Governor Lachlan Macquarie, having created the five Macquarie towns, explained "on the North or left Bank of the Hawkesbury, I have named Wilberforce – in honor of and out of respect to the good and virtuous Wm. Wilberforce Esqr. M.P. – a true Patriot and the real Friend of Mankind …"

Historic Wilberforce
Wilberforce has lost much of its historic charm due to the advances of modern suburban development however it is still possible to see the precise grid-system layout of the town and on the eastern side of the road as you enter town there are an interesting row of buildings including a cottage and the police station (1883). It is also a comment on the historic nature of the area that the road to Wilberforce from Windsor passes through rich alluvial riverflats and there are numerous opportunities to stop and purchase fresh fruit and vegetables from roadside stalls.

St John's Schoolhouse and Grave
Located on Church Road, which runs north of the road to Ebenezer, the Wilberforce Schoolhouse is one of only four schoolhouses still standing which were commissioned by Governor Lachlan Macquarie. It is located next to St John's Anglican Church. The schoolhouse, built in 1820, is a simple building of sun-dried bricks with a skillion added to the back to provide accommodation for the teacher and his family. It stands behind the church. There is also a very early grave dating from 8 October, 1804. It is the grave of John Howorth, an 11-year-old who died after being bitten by a snake.

St John's Anglican Church
Built in 1859 at a cost of around £1500 St John's Church (1859) is a typical small Edmund Blacket church. It is particularly distinctive because it has an unusual sundial on the north wall which was placed there to commemorate the parish clerk and local schoolmaster, John Wenban who died only seven months before the church was completed. Wenban's grave is located in the church cemetery which has graves dating back to 1816.

Rose Cottage
Built around 1810, Rose Cottage is reputedly the oldest timber building still standing in Australia. It was continually occupied by the Rose family (the original Thomas Rose was a free settler from Dorset) until 1961. It is recognised as a fine example of a two-roomed lathe and mud-plaster house from its period and is characterised by interesting displays of early furniture and some truly remarkable examples of primitive carpentry. Check out the front door! Contact the Thomas and Jane Rose Family Society on 4735 2553 or 9144 1773 or 0409 776 186 for opening times.

The Australiana Pioneer Village
Located at Rose Street and open from 10.00 am - 4.00 pm every Sunday, the Australiana Pioneer Village was started as a commercial enterprise, failed, was closed for ten years and then was taken over by volunteers and opened again on Australia Day 2011. It is genuinely interesting combining a large number of historic buildings (which have been brought to the site) with demonstrations of traditional crafts and volunteers who dress up and recreate the various roles of people from the 19th century. The buildings include the pit sawn timber Mitchell Cottage (1890); Bank of Australasia (1920s); Riverstone Police Station (1888); Perry House (1856) from Richmond; some wagon sheds; Case Cottage (1896); Cartwright Cottage (1870); Atkins Blacksmith Shop (1862); stable of the Blackhorse Inn (1874); Bowd's Sulky Shed (1874); Aiken Hut (1875); St Phillips Church (c.1890); Kurrajong Railway Goods Station (1926); Shearing shed (1880s); Mangold Cottage (1886); Kenso Cottage (1890); Bee Hive Shop (1879); North Sackville Post Office (c. 1890); Riverstone General Store (1860); the Oxboro Inn; Marsden Public School (1889); Quilty stables; and Salters Barn (1850). For more information check out http://www.theapv.org.au.

“Having sufficiently celebrated this auspicious Day of christening the five Towns and Townships, intended to be erected and established for the security and accommodation of the Settlers and others inhabiting the Cultivated Country, on the Banks of the Rivers Hawkesbury and Nepean; I recommended to the Gentlemen present to exert their influence with the Settlers in stimulating them to lose no time in removing their Habitations, Flocks & Herds to these Places of safety and security, and thereby fulfil my intentions and plans in establishing them.”

And so the five towns, now on the outskirts of Greater Sydney, were created by the orders of the governor. A good, old fashioned government edict.

* In 1789 Governor Arthur Phillip explored the area. Phillip described the rich countryside 'as fine as any I ever saw'. The richness of the farmlands and lush green hills caused Phillip to name the area Green Hills.

* Wilberforce was first settled by Europeans in 1794 and quickly became the granary for the colony. The early farmers provided Sydney Town with almost half its food supply. The produce was delivered by boat down the Hawkesbury River, out into the Pacific Ocean and around into Sydney Harbour. This was the beginning of a riverboat industry which continued throughout the nineteenth century.

* In 1799 five settlers from the Hawkesbury River district - Simon Freebody, William Butler, Ed Powell, James Metcalfe and William Timms - were all brought to trial for the murder of two Aboriginal boys.

* In 1835 the famous bushranger, Frederick Ward, known as Captain Thunderbolt, was born in the town.

The Hawkesbury City Council's website - http://www.hawkesburytourism.com.au - has lots of useful information about the district. 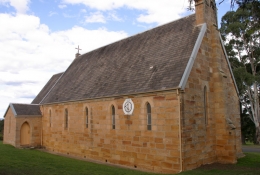 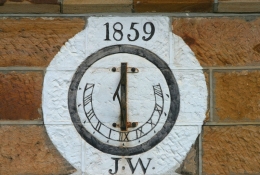 The sundial commemorating the schoolmaster, John Wenban, on the wall of St John's Anglican Church. 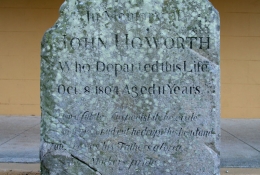 One of the country's earliest gravestones, dating from 1804, beside St John's Anglican Church. 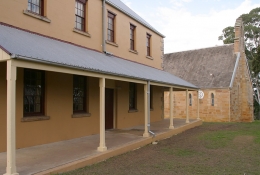 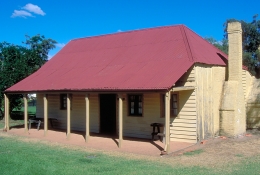 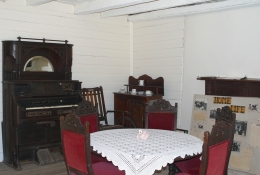 A typical interior at Rose Cottage. 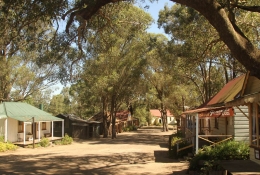 The main street at the Australiana Pioneer Village. 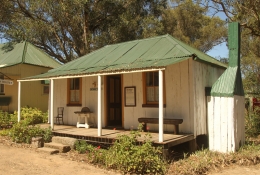 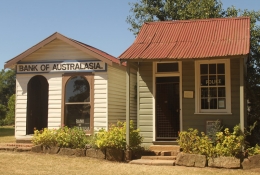 The Bank of Australasia (1920s) and Riverstone Police Station (1888) at the Australiana Pioneer Village. 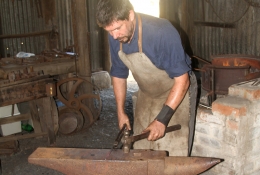 Traditional trades, such as blacksmithing, are demonstrated at the Australiana Pioneer Village.