Historic port on the Darling River

It is impossible to write about Wilcannia without discussing what white visitors describe as "the Aboriginal problem". There has long been a perception, fuelled by newspaper reports and images of groups of local Aborigines standing around outside the pubs in the main street, that the town is a hotbed of violence, dysfunctional behaviour and "problems". It is not uncommon to hear, in White Cliffs, Cobar or Broken Hill, people declaring that they drove through Wilcannia and did not stop because it looked so dangerous. And it is very common to hear locals advising visitors not to stop in Wilcannia because it is a dangerous town.

This assessment is simply not true. Historically there was a major problem because very ignorant government officials used Wilcannia as a dumping ground for Aborigines from surrounding areas with no thought (or knowledge) that they belonged to different language groups and were not necessarily going to all live happily ever afterwards. It was not dissimilar to creating a camp in the Balkans and putting a mix of Croats, Serbs, Macedonians and Greeks together because they all look white and surely they will all get along with each other. The potent mix of the local Barkindji with Wangkumara, Danggali, Barindji and Malyangapa people from surrounding areas was deeply divisive and racially insensitive.

Sadly very few travellers get out of their cars, have a look around this genuinely fascinating historic port town and talk to the local Aborigines, who are, almost without exception, very friendly and only too happy to chat about this interesting township on the banks of the Darling River. After all, many of them are Barkindji people who have been living in this region for 40 000 years.

Wilcannia is located 948 km north west of Sydney via the Great Western, Mitchell and Barrier Highways. It is only 78 m above sea-level and the average rainfall is 252 mm per annum.

Wilcannia reputedly means "a gap in the bank where the flood waters escape" in the Barkindji language of the local Aborigines.

Historic Wilcannia
When the paddle steamers from South Australia managed to traverse the Darling River and reach Wilcannia the town became an important river port. By the 1880s it was an impressive collection of buildings, many built from local sandstone, ranged along the streets above the river. To experience the town: spend time, read the placards outside the buildings, and explore the Heritage Trail which comprises eighteen sites (with two more in Tilpa) all of which are of genuine historic interest. Some of the buildings that are particularly impressive and interesting include:

Wilcannia Bridge (1896)
The bridge that crosses the Darling River at Wilcannia is an unusual centre–lift construction (if the paddlesteamers were too high it could be raised to allow them safe passage) which is now classified by the National Trust. It replaced a punt which was capable of moving 4,000 sheep a day across the river. The town's wharf, dating from the 1870s, can be seen from the bridge. Sheep were often unwilling to cross the bridge and locals made a lucrative income by hiring out poddy lambs or pet sheep to lead the herd across. The best views of the bridge are from the banks of the river below the Court House and Police Station. The Heritage of Australia records: "The central span lifts vertically on wire ropes, balanced by counterweights in corner towers, which are portal-braced and connected across the span. It is a classical example of the bridges built over western rivers when barges, often highly laden with wool, were the main means of transport."

Post Office (1880)
On the corner of Reid Street and the Barrier Highway is the elegant Post and Telegraph office and its attached residence. The buildings have been well maintained with restoration work in 2010 and a reopening in 2013. The residence, a handsome home for the postmaster, is a two storey dwelling with fine ironwork on the upstairs veranda.

Club Hotel (1879)
The Club Hotel on Reid Street was built on the site of the town’s first hotel. It was nicknamed the "Five Alls" after an English aphorism:

First - The Clergyman - I pray for all
Second - The Lawyer -I plead for all
Third - The Doctor - I heal all
Fourth - The Soldier - I fight for all
Fifth - The Farmer - I pay for all.

A suitably rural joke about the unfairness of life for the farmer.

Knox & Downs Store (1890)
Once the ultimate country general store, the Knox & Downs Store, diagonally opposite the Post Office, was where locals and travellers could buy literally anything. It was burnt out in 2002 but there is an active movement to find someone who is willing to develop and reopen it.

Wilcannia Athenaeum (1883)
Further along Reid Street is the Athenaeum Library now the Wilcannia Athenaeum Pioneer Museum. Like so many of the buildings from the 1880s it is made from local sandstone and reflects the solidity and confidence which the thriving town had at the time. The Athenaeum's original committee included Edward Dickens (Charles Dickens's son).

Court House (1880)
Located next door to the Police Station in Reid Street is the impressive courthouse built of locally quarried sandstone and designed by Colonial Architect, James Barnet. On 25 April, 1885 the courthouse was the scene of a very unlikely legal argument over the issue of cruelty to animals. It wasn't the case but the people involved which make the scene so memorable. One of the police magistrates was Edward Bulwer Lytton Dickens, the son of Charles Dickens, and one of the prosecution witnesses was Frederick James Anthony Trollope, the son of the novelist Anthony Trollope. An unusual meeting of the sons of two of the great literary figures of the day.

Police Station (1881)
The Wilcannia Police Station in Reid Street is a two storey building designed in the classical manner, the building has a heavy appearance with a two storey colonnaded veranda which looks like it could be an addition. Constructed in locally quarried sandstone with rendered brick columns, it was designed for use as a jail by James Barnet. Given Wilcannia's remote location, the large size of the gaol is probably a comment on the town's administrative importance for the district.

Tilpa
The tiny township of Tilpa (it comes from a Barkindji word "thulpa" meaning "flood waters") lies 145 km north east of Wilcannia on the Darling River. It is located on the Wilcannia-Bourke Road. It proudly declares itself "the village on the floodplain" adding "with the shortest Heritage Walk in Australia" (there are only two heritage plaques in the town) but, interestingly, the Heritage Walk is a useful insight into life along the Darling River at the end of the nineteenth century with stories of riverboat captains and the way the barges were loaded with wheat which was taken down to the ports in South Australia. Today Tilpa is little more than the Royal Hotel. A good place to stop for a drink. The population varies but, at the moment, in 2007 it was 6.

The Royal Hotel has been operating since 1894. In the early days it was both the pub and the post office although this was stopped when a local complained in a letter that argued "1. That the present situation is unsuitable owing to there frequently being drunken men hanging about the premises for days at a time. 2. That frequent rows occur at all hours days and night as at most roadside inns. 3. The annoyance and interruption caused to the Postmaster by the aforementioned disturbances." The post office was moved shortly afterwards.

* Prior to the arrival of Europeans the Barkindji had been living on the banks of the Darling River for an estimated 40,000 years.

* The first European explorer in the area was Major Thomas Mitchell who, in 1835, travelled down the Darling from Bourke to Menindee. Mitchell was confronted by Barkindji warriors near present-day Wilcannia. In the ensuing battle he killed at least two people.

* The settlement of the area by pastoralists began in the 1850s.

* By 27 January 1859 a steamer, the Albury, had traversed the river from South Australia to the current site of Wilcannia which was known as Mount Murchison Station at the time.

* Wilcannia was officially proclaimed a town in June, 1866 and was incorporated as a municipality in 1881.

* In 1879 the Red Lion brewery (it is no longer standing) was built at the northern end of Reid Street. Its great claim to fame was that it was the first brewery which the famous beer entrepreneur Edmund Resch built in Australia.

* By the late 1880s Wilcannia was the third-largest port on the Darling River. At the time it became known as "Queen City of the West".

* The discovery of gold at Mount Browne saw traffic and trade increase through the port.

* When opals were discovered in White Cliffs in the 1890s the river trade increased. Wilcannia became the supply depot for the opal miners. Eventually, as road and rail traffic increased the steamer trade, the town's importance, declined.

* In 1892 Wilcannia was hit with a rabbit plague so severe that a man was employed to remove the rabbits which had been killed by children on their way to school.

* By the 1920s, with the arrival of reliable road transport, the town's importance as a port declined.

* Today 65% of the town's population are indigenous.

* In 2012 the Lowitja Institute established an Adult Aboriginal Literacy Campaign in the town. At the time it was estimated that 40% of the town's Aboriginal community were illiterate.

There is an excellent and useful local website - http://wilcanniatourism.com.au - which provides advice on local road conditions and other relevant information. 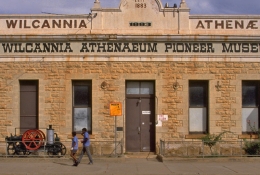 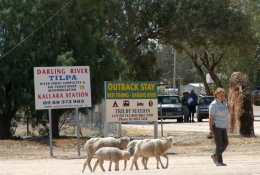 Sheep in the main street of Tilpa. 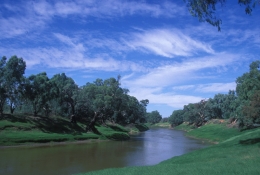 There are times, when the Darling is full and the rains have come, when the area is covered in green. This photo was taken around 1990. 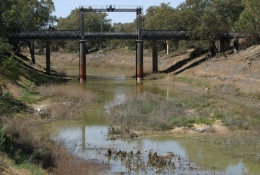 The Wilcannia Bridge. There are times when drought hits the land and it is dry and the river is reduced to a few muddy waterholes. This photo was taken in 2007. 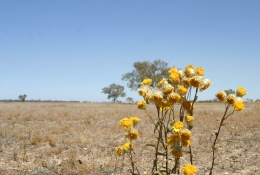 ... and this is what the country around Wilcannia looks like during a drought. Photo taken: 2007.