Williams is a small rural service town surrounding by agricultural land devoted to wool, wheat, oats and hay and some beef cattle. Historically it was an important watering place on the route from Perth to Albany. Today it is a quiet town which is impressive in spring when the local wildflowers are in bloom.

Williams is located 159 km south-east of Perth on the Albany Highway.

The area around Williams was first explored by Europeans in 1831 when Captain Thomas Bannister led the first overland expedition from Perth to King George III Sound (Albany). It is likely that Bannister or Governor Stirling named the river after King William IV who had become king in 1831.

3. Agricultural Hall (1898)
This was the town's all-purpose hall being used for weddings, church services, an aircraft spotting station during World War II and even Road Board meetings. Located on the Albany Highway it is now used as an Op shop.

5. Millbrook (1850)
A charming, understated home on the Albany Highway, Millbrook was started in 1850 with extensions added later. The Heritage Trail notes: "The house was built of red clay bricks in English bond with a shingled roof; the stables are of Flemish bond. It had a variety of uses - one of the rooms was used as a classroom before the Government School was built in 1888." At various times it has been a general store, a butcher's shop and a coffee palace. It is now a private home.

6. Williams Hotel
The impressive old Williams Hotel (1871), located on the Albany Highway, is recognised as the oldest recorded building in town even though Millbrook, over the road, may be older. In 1870 Alfred Quartermained was granted a licence. He had operated a pub in the town since 1850 when he had constructed a simple stone and thatched roof building. It was expanded in 1871 and was largely rebuilt in 1905 with only a few of the original features being retained. In the early days of motoring the pub also sold fuel for cars.

7. Williams River Bridge
The first bridge across the Williams River, and the reason the town came into existence, was built by convicts in 1855. By 1911 it was beyond repair and the current bridge replaced it.

8. Convict Tank
On the other side of the Williams River is an unusual 4,500 litre underground tank which was built from bricks and cement by ticket-of-leave men in the 1880s. This beehive-shaped tank is now located near the first fence over from the bridge and has information signs near the road. Created in 1988 for the Bicentennial year the Heritage Trail brochure can be downloaded at http://www.williams.wa.gov.au/Profiles/williams/Assets/ClientData/Document-Centre/Public-Documents/Heritage_Trail_Williams.pdf.

Jesse Martin Museum
Local farmer, Jesse Martin started his museum back in 1976. He first built a replica inn with original fittings. Later he built an historic general store and other replica buildings all of which are located on the family farm. It is a private collection which is  available for viewing by appointment only. Tel: (08) 9885 1118 for details.

Dryandra Woodland
Dryandra Woodland, located 25 kms north of Williams, is a 22,000 ha forest where it is possible to see woylies, numbats, wallabies, kangaroos and possums. In spring it has extensive stands of local wild flowers.

* The area was first explored by Europeans in 1830-1831 when Captain Thomas Bannister led the first overland expedition from Perth to King George III Sound (Albany).

* Land along the Williams River was being claimed as early as 1832.

* In 1835 Lieutenant Governor James Stirling led an expedition into the area.

* In 1836 Joseph Strelley Harris became the first European settler in the Williams district.

* In 1836 Lieutenant Henry Bunbury explored the Williams River and upon his return he declared that he had ‘passed through a wretched country with neither water nor feed: on the Williams the land is generally very bad and the water brackish.’

* In 1839 Harris was the first to drive sheep overland from King George III Sound to Williams.

* The first bridge over the Williams River was built by convicts in 1855 and as travel between Perth and Albany increased so did the Williams township. The town quickly became one of the major stopover points on the coach road from Perth to Albany.

* A more direct route to Albany was taken through the present Williams townsite in 1857.

* The Williams River Bridge Hotel was opened in 1870.

* The site of the present hotel and the townsite was surveyed in 1905.

* In 1906 the townsite was subdivided into quarter acre blocks.

The local council has a useful website with information about local attractions. Check out http://www.williams.wa.gov.au/local-attractions.aspx. 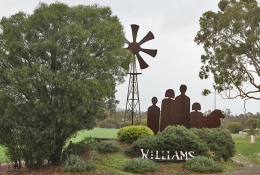 The entrance to Williams 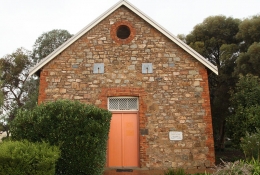