Southern gateway to the Barossa Valley famed for its Whispering Wall

Williamstown is a pleasant, quiet little town beside a creek on the southern edge of the Barossa Valley. Williamstown is at its best in springtime with wildflowers along the creeks and the low hills around the town dotted with cows and vineyards. The major attraction of the area is the compelling Whispering Wall at the Barossa Reservoir (an unusual piece of engineering) and the pleasant walks in the Parra Wirra Conservation Park.

Williamstown is located 50 km north-east of Adelaide on the southern edge of the Barossa Valley.

The first person to settle at Williamstown was Thomas Adams. He exchanged his land with a man named Lewis Johnstone for a mob of horses. Johnstone subdivided the land which he named Williamstown after his eldest son, William.

Barossa Reservoir and Whispering Wall
The Whispering Wall is located 10 km west of Williamstown via Williamstown Road and is a genuine acoustic miracle. The curved retaining wall of the Barossa Reservoir, which is about 140 metres long, has acoustics that allow a person on one side of the wall to speak in a normal voice and a person at the other side of the wall can hear them clearly. The SA Memory explains: "The Barossa Reservoir's 'Whispering Wall' dams the Yattie Creek Gorge near Williamstown in the Barossa Valley to the north of Adelaide. The water supply comes through a tunnel from the South Para River. The dam is known as the Whispering Wall for the way in which it carries sound from one side of the Wall to the other. As the Wall is one part of a perfect circle, the sound waves bounce in a series of straight lines to the other side. The dam was designed by the Irish-born engineer Alexander Moncrieff and attracted worldwide attention at the time of its construction, as the idea of a tall but thin concrete structure curved against the pressure of the water was quite radical. The dam is more than 10 metres thick at the base and tapers to a narrow walkway at the top. It is constructed of primarily from concrete and 'plums' - quartz boulders blasted from the sides of the gorge. Old tram tracks were added for extra strength near the top. Construction of the dam began in 1899 and was completed in 1903. About 400 workers and their families set up camp near the building site at the height of construction." For more detailed information check out http://www.samemory.sa.gov.au/site/page.cfm?u=283.

Parra Wirra Conservation Park
Located 13 km south-west of the town this 1410 hectare conservation park has some good walking tracks and some ruins from the goldrush which occurred in the area in the 1860s. The park is ideal for people wanting to picnic or go bushwalking. The most popular trail in the park is the Lake Discovery Loop (1km) which starts at the East Lake car park and loops around the lake. The downloadable brochure explains that "There are over 100 species of birds living in the park, including the cheeky emus you’ll see patrolling the picnic grounds. You can see kangaroos grazing at dawn and dusk, and on a warm day bearded dragons and sleepy lizards bask in the sunshine. If you’re in luck you might also spot a short-beaked echidna, a shy creature whose diggings can be found throughout the park. For more information and to access the downloadable brochure, check out https://www.parks.sa.gov.au/find-a-park/Browse_by_region/Adelaide_Hills/para-wirra-conservation-park.

Hoffnungstahl
Located 7 km north of Williamstown (via the road to Lyndoch and Hoffnungstahl Road) is a memorial to one German pioneer settlement which did not survive. Monument Australia notes of the settlement: "Founded in 1847, it was located in an ephemeral lagoon which was dry for the first years of settlement. Local Peramangk people warned the settlers that the area was prone to flooding, but this advice was ignored. In October 1853, after a week of heavy spring rains, the village was flooded and many of the houses were evacuated. After the cost of a proposed drain was seen as prohibitive, the village was eventually left deserted and while a few remained in the area the settlement was eventually abandoned." Check out https://monumentaustralia.org.au/themes/landscape/settlement/display/94353-hoffnungsthal-pioneer-memorial fo more details.

Wineries in the Area
In areas like the Springton district, where there are a number of cellar doors, it is best to refer to the specific knowledge by the wine experts. The Barossa Australia website provides an excellent site (check out https://www.barossa.com/wine/wineries-search) which has detailed information about the wineries in the region. Just type Springton into the Search Filter.

* Prior to the arrival of Europeans the area was home to the Peramangk Aboriginal people. They lived on a diet of grass seeds, kangaroos, wallabies, possums, lizards and fish and protected themselves against the winter cold with possum skin rugs. Their life was simple but perfectly in tune with the climate, flora and fauna of the region.

* By the 1830s Springton was known as Black Springs.

* By December, 1837 explorers had reached Lyndoch

* By 1838 other explorers had reached the Murray River passing through the Barossa Valley.

* In the early 1840s Thomas Adams moved into the area and called it Victoria Creek.

* Adams was unimpressed with the land and sold his holding for a mob of horses.

* A man named Lewis Johnstone acquired the land and cut it into allotments. He named the small town after his eldest son, William and named Elizabeth Street after his wife.

* In the 1950s a series of reservoirs - the Barossa, Para Wirra and South Parra - were built to supply Adelaide with water.

* In 1956 the town was struck by an earthquake which measured 3.6 on the Richter scale.

There is information about accommodation and eating in the district at https://www.barossa.com/williamstown. 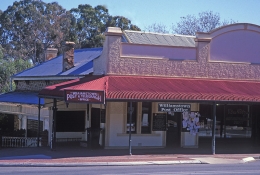 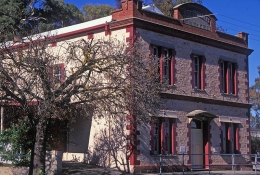 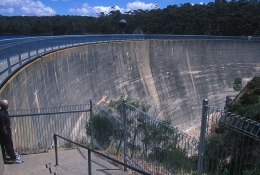 The Whispering Wall on Barossa Reservoir 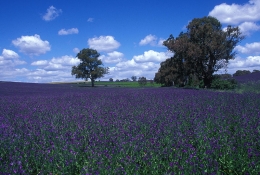