Home of the first Coles store in a "valley of views"

Wilmot is a tiny township which once had a single general store that served the surrounding rural area. It is on a scenic route from the coast to Cradle Mountain and consequently has become a popular stopping point for cyclists and motorcyclists looking for a quieter route to the Cradle Mountain National Park.

Wilmot is located 129 km from Launceston via Devonport, 310 km from Hobart via Westbury and Latrobe, and 40 km from Devonport.

Wilmot was named after Sir John Eardley-Wilmot who was Lieutenant Governor of Van Diemen's Land from 1843 until 1846.

Letterbox Trail
Tasmanians love vernacular art and in the case of Wilmot the speciality, which has focussed the local population, is roadside letterboxes mostly made from scraps of material (metal tins, buckets, pieces of wire and iron) and shaped into elaborate mail boxes. On one level they are a lot of fun. On another level there is a sense of community in the way most of the people in the district have decided to present their letter box as an expression of themselves. Everyone will find one that amuses them, one that they admire because of the craft involved, and one that is just plain silly.

Wilmot Museum
A small rural museum located in the local schoolhouse. It has an interesting collection of photographs and memorabilia and is now one of the few places where you can see photographs of the original G.W. Coles store. The building dates from 1894.

The Telegraph Pole Trail
You will notice that many of the telegraph posts have been painted to record the history of the area.

* The area wasn't settled until the 1890s. The settlers were confronted with the daunting task of clearing land which was densely timbered.

* The first G.W. Coles shop was established in Wilmot in 1914. In the 1980s there was a brochure on the history of the shop which explained: 'Coles - A link with Tasmania. The personal link which the Coles family has long enjoyed with Tasmania began in the early years of the century when Mr George Coles, father and founder of G. J. Coles Ltd, left Victoria to buy and operate a general store in the small country town of Wilmot. It was at Wilmot that the one-time chairman and managing director of the company, Norman C. Coles, received his primary education at the time when his older brother A. W., later Sir Arthur, was assisting his father. The retailing chain which was destined to become Australia's biggest actually had its modest beginnings in the Melbourne suburb of Collingwood when Mr G. J. Coles, Sir George, and his brother Jim, opened their tiny 3d, 6d and 1/- store in 1914. 'The Coles store at Wilmot was purchased by the original George Coles because of its bankruptcy. Needless to say Coles had trouble raising funds to purchase what appeared to be an unsuccessful business. Once he did his sons came back from World War I with its cheap goods. Afterwards he moved to Melbourne where he set up a chain based on the ideas of Woolworths. In its heyday Coles store in Wilmot actually had about 15 employees and three trucks were used to take supplies to the surrounding areas.'

* In 2014 the historic Coles Store was destroyed by fire.

The general store used to operate as an information centre. There is now no source of information although the Visitor Information Centre, 5 Pioneer Crescent, Sheffield does have information on the Letterbox Trail. tel: (03) 6491 1036.

There is a very good and detailed website - http://www.think-tasmania.com/wilmot/ 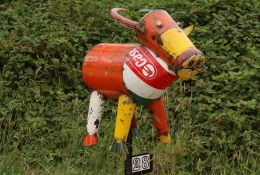 A piece of metallic cattle for postal delivery south of Wilmot 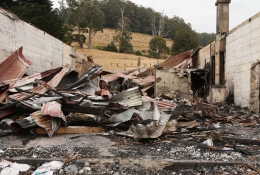 All that is left of the original G. W. Coles store at Wilmot 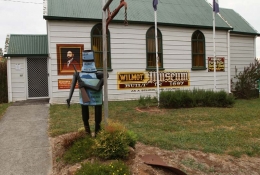 The Ned Kelly letterbox outside the Wilmot Museum. 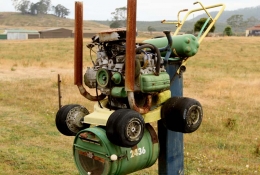 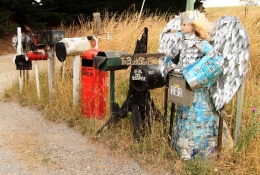 A beer can angel (or is she the Queen of the Fairies) north of Wilmot. 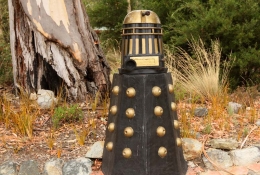