Popular National Park at the southernmost tip of mainland Australia

Wilsons Promontory, and Wilsons Promontory National Park (it covers 50,512 ha including offshore islands), are essentially a holiday destination for people who love nature and the pleasures that the outdoors can offer. The park itself is an interesting blend of mountainous forests, fern gullies, heaths, salt marshes, grey granite ranges and 130 km of coastal scenery. It proudly declares itself the southernmost tip of mainland Australia and its primary attractions are camping (at the family friendly Tidal River campsite); swimming at the beaches around the promontory; observing the local kangaroos, emus and wombats; snorkelling in the marine national park; and bushwalking and walking along the beaches. The National Park includes thirteen offshore islands. There are marine reserves around the coast. Running east to west across the isthmus are two huge sets of dunes known as Big Hummock and The Nobbies.
'The Prom', as it is called by locals, has over seven hundred native plant species in the rainforests, dry sclerophyll forests, grasslands, heaths, sheltered gullies and along the marine littoral, including tea-trees, banksia, she-oaks, pink swamp-heath, silky hakea, saw banksia, yellow stringybark, blue gum, mountain ash, coastal acacia, spinifex and, in springtime, extensive wildflowers.
The area is famous for its fauna with more than 30 varieties of mammal including koalas which can be observed in the trees around the Tidal River camp ground, along the Lilly Pilly Gully walk and around Sealers Cove; grey kangaroos and emus on the Yanakie Isthmus; wallabies at Tidal River; as well as rat kangaroos, New Holland field mice, wombats, possums and bandicoots. There are over 180 species of birds including crimson rosellas, yellow-winged honeyeaters, wattlebirds, yellow-tailed black cockatoos, lorikeets, silver gulls, oystercatchers, dotterels, white-breasted sea eagles and the grey thrush. The promontory functions as a feeding ground for international migratory birds and includes endangered species such as the ground and orange-bellied parrots. Thirty shipwreck sites are part of the Wilsons Promontory Marine Park.

Wilsons Promontory is 223 km south-east of Melbourne via Leongatha and Fish Creek.

The local Aborigines called Wilsons Promontory 'Wamoon' or 'Wamoom'. It was subsequently named by the explorer George Bass who sighted the promontory on January 2, 1798. No one is sure who Bass named the Promontory after. Some sources suggest that Bass named it after a friend - a London merchant named Thomas Wilson. Others suggest that Wilson was a friend of Matthew Flinders. Another story credits Governor Hunter with naming the area and claims that Bass originally called it Furneaux Land.

Information and Access
Information about Wilsons Promontory National Park is available from the visitors' centre at Tidal River, 32 km within the park. It also provides information about accommodation and barbecues, picnic areas and toilets. Contact points are tel: 13 19 63, (03) 8427 2122 and (03) 8427 2122 or https://www.parks.vic.gov.au/places-to-see/parks/wilsons-promontory-national-park.

Tidal River Campground
Located at the end of the main road into the park, and 30 km south of the park entrance, is the Tidal River Campground. The Parks Victoria website explains: "Tidal River is the main visitor hub for Wilsons Promontory National Park. There are many accommodation options within Tidal River, from award-winning Wilderness Retreats for a quiet getaway for one or two, to Group Lodges that can accommodate up to 30. And of course, the campground is a family favourite." For more detailed information check out https://www.parks.vic.gov.au/places-to-see/parks/wilsons-promontory-national-park/where-to-stay/tidal-river-campground.

Walking and Cycling in the National Park
One of the primary reasons for visiting Wilsons Promontory National Park is to go walking and cycling. There are literally 24 dedicated tracks ranging from the very modest 2 km walk around the sand dunes at Big Drift (https://www.visitpromcountry.com.au/walking-cycling/big-drift) to the challenging 19.1 km (one way) walk from Tidal River to the Wilsons Promontory Lightstation (https://www.visitpromcountry.com.au/walking-cycling/lightstation-walk). They are all described in detail at https://www.visitpromcountry.com.au/walking-cycling/wilsons-prom-walks.
Some of the walks are enjoyable strolls, some are overnight treks. The Lilly Pilly Gully nature walk is 5 km return and the Mount Oberon walk is 3.2 km return. It takes one hour to climb the 562 m mountain which offers excellent views of Tidal River, Norman Bay and the headlands to the north. Pillar Point is 6 km return and looks out over Tidal River.

The Wilsons Promontory Lighthouse
In the 1840s and 1850s the coastal waters around the promontory claimed a number of shipwrecks. In 1859 a lighthouse was completed on the south-east cape. It was built of local granite by convict labour over the period 1853-1859. The cost of the  building was shared between the governments of New South Wales and Victoria. The lighthouse stands 19 metres and is 117 metres above sea level. The lighthouse is heritage listed, and since being de-staffed the staff cottages are used for visitor accommodation. There is a catch: there is no road and people renting the cottages have to walk the 19.1 km from Tidal River. Bookings can be made at https://www.parks.vic.gov.au/explore/parks/wilsons-promontory-national-park/things-to-do/wilsons-promontory-lightstation. For more detailed information about the lighthouse check out https://lighthouses.org.au/vic/south-east-point-wilsons-promontory-lighthouse.

From Yanakie to Tidal River
The drive from the entrance at the Yanakie Isthmus to the Tidal River Visitor Information Centre offers a good taste of what the park has to offer. It is clearly signposted and has roads heading off to car parks, beaches and bushland walks. Five Mile Road branches off to the left and heads towards the Millers Landing Nature Walk (2.4 km), which leads through banksia woodlands to mudflats and mangroves and fine views over Corner Inlet. The track continues eastwards to Five Mile Beach and the northern sections of the park. On the right of the track is Mount Vereker at 638 metres. Further south is the tallest peak in the park, Mount Latrobe, at 755 metres. Back on the road to Tidal River is Darby River, with Darby Beach only 1 km west and, from there, a walking track which leads to Tongue Point, overlooking the coastline. This is a more secluded spot than the main settlement although the safest beach in the park is probably Norman Bay, adjacent to the Tidal River centre.

The Geology
'The Prom' is granite which has weathered in places to form rocky outcrops. Once an island, the promontory is a result of drifting sand accumulating in the sheltered water that separated the island from the mainland. It is thought this connection occurred about 100,000 years ago. The promontory is one of the highest points on a batholith (a huge igneous rock deposit) which is 300 km long and, at times, 50 km wide and which links Tasmania to the rest of Australia. Around 15,000 years ago rising sea levels submerged the corridor thus isolating Tasmania and making it an island.

* Around 15,000 years ago the promontory was part of a land mass connecting Tasmania to the mainland

* Prior to the arrival of Europeans, Wilsons Promontory, known as 'Wamoon' or 'Wamoom' by the First Nation peoples, had been home for over 6000 years to the Brataualung Aboriginal people. Middens along the western coast testify to their seafood diet. The Dreamtime stories of Lo-An, Bullum-Boukan, and the Port Albert Frog all make mention of the area.

* George Bass sited the promontory on January 2, 1798 from a small whaleboat.

* In 1798 Bass returned to Sydney with 9000 seal pelts and several tons of oil. This produced an immediate sealing rush which lasted for over 30 years.

* Whalers also used the waters around the Promontory until  the 1840s.

* A sawmill was established at Sealers Cove in the 1840s.

* In the 1850s large areas of the promontory were leased for cattle grazing.

* Quarrying and timber-cutting was common until the 1850s.

* In 1853 Baron von Mueller collected plant specimens on the promontory.

* Tin was discovered near Corner Inlet in the 1870s. It was not mined until World War I.

* A timber mill reopened in the 1880s due to regrowth and stimulated demand and it ceased in 1925 with the opening of the Mount Hunter mine.

* By 1884 naturalists and botanists were campaigning for governmental protection of the site.

* In 1892 there was an attempt to establish a settlement on the promontory.

* In 1903 a second sawmill was built and a pier was constructed.

* In 1905 the area became an official National Park.

* In 1908 the coastal areas were added to the National Park.

* A chalet for tourists and naturalists was built in the 1920s.

* A training camp for commandos was constructed at Tidal River during World War II.

* A severe bushfire in 1951 seriously damaged the area's animal and plant life.

* The Yanakie Isthmus, a sandy bar connecting the promontory to the mainland, was added to the park in 1969.

* In 1993 the Wilsons Promontory lighthouse was converted to solar power.

* In 1996 the government proposed a hotel at Tidal River. It was shelved after public opposition.

There are always more people wanting to stay than there are available accommodation options. The National Park has 484 camping and caravan sites but only 20 are powered. There are also Wilderness Retreats, Cabins, Units, Huts and Group Lodges. To book, check out https://www.parks.vic.gov.au/places-to-see/parks/wilsons-promontory-national-park/where-to-stay/tidal-river-accommodation. There is also accommodation at Yanakie, just outside the park.

There is a general store at Tidal River but no other facilities inside the park. 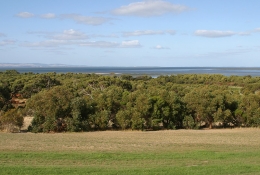 Rich pasturelands lie at the northern edge of the National Park 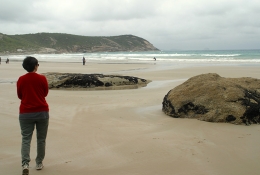 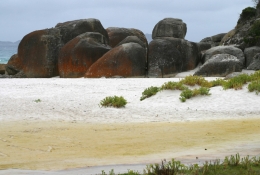 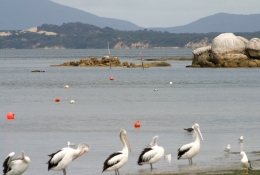 Pelicans on the beach at Yanakie 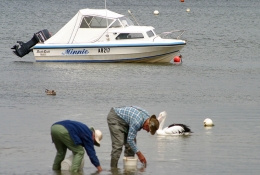 Searching for bait on the shoreline near Yanakie 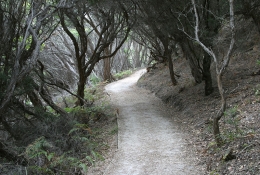 There are numerous bushwalking trails through the coastal hinterland 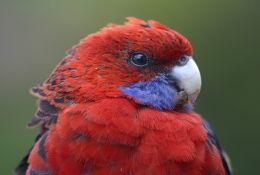 A crimson rosella in the Wilsons Promontory National Park