Winchelsea is a small rural town on the Barwon River which describes itself as the "Gateway to the Otways". It lies in a rich agricultural area which was one of the first places in Victoria settled by Europeans - the local pub is the third oldest in the state and the impressive Barwon Park Homestead played host to Prince Alfred, the Duke of Edinburgh.

Winchelsea is located 115 km south-west of Melbourne on the Princes Highway between Geelong and Colac.

Winchelsea was named in the 1850s after it had been surveyed. It is generally accepted that it was named after Winchelsea, one of the Cinque Ports on the south-east coast of England between Hastings and Folkestone. Before it was called Winchelsea it was known as Austin's Ford and The Barwon.

Winchelsea Heritage Walk
A brochure is available at the Visitor Information Centre. It describes a Heritage Walk of 13 interesting historic locations: "The trail commences at the Winchelsea Visitor Centre and includes landmarks such as the Globe Theatre, the Barwon River, the triple-arched bluestone bridge and the Winchelsea Railway Station, which houses a steam-hauled passenger train." It can be downloaded by accessing https://www.surfcoast.vic.gov.au/Experience/Tourism/Things-to-do/Walking-tracks and clicking on Winchelsea Heritage Walk.

Barwon Hotel
Located at 1 Main Street, the Barwon Hotel  was built in 1842 (it has a newer facade) and is recognised as the third oldest pub in Victoria.

Barwon River Bridge
Just down from the hotel is a three-span bluestone arch bridge which was erected over the Barwon River in 1867. It cost £4,602 and is considered one of the most impressive stone structures in Victoria. The commemorative stone is undated. It was prepared in great haste because the bridge was to be opened by the Prince Alfred, Duke of Edinburgh. The official opening occurred on 3 December, 1867. It was one of Prince Alfred's three visits to Barwon Park. For more information check out https://vhd.heritagecouncil.vic.gov.au/places/69768.

St Thomas Anglican Church
In 1846 Thomas Austin, assisted by Prosper Trebeck and Charles Beal, financed the original town church which is now part of the hall adjoining this simple bluestone building. It adjoins the second Anglican church which dates from 1860, is located at 25 Barwon Street, and is now called St Thomas' Community Church. Check out https://www.churchesaustralia.org/list-of-churches/denominations/anglican/directory/2965-st-thomasand%2339%3B-community-church for more information.

Globe Theatre
Located at 17-19 Willis Street, the Victorian Heritage Database notes of the building "The Globe Theatre was built in Winchelsea in 1926-27 as a picture theatre and concert hall. Constructed by the Lawrence family, it provided a venue for the local talent, Marjorie Lawrence, to perform. Lawrence, who became an internationally acclaimed soprano, gave her farewell concert in the building in 1928, prior to studying in Paris, and gave her first return concert there in 1939. The theatre was also used for movie screenings, weddings, dances and horticultural shows. In 1946 the theatre was acquired by the Winchelsea Shire Council ... The simple, hall-like building has a main broad gable roof and a smaller gable to the front, both of which terminate in eaves along the sides of the building. At the front, a bold, bracketed, stepped parapet conceals the building behind. The original skillion verandah across the front facade was replaced by one of similar form in 1992. Paired ventilation stacks dominate the ridge line of the main roof. The original portions of the building are clad with galvanised iron sheeting to dado level, folded to reflect strapped horizontal boards. The upper walls are clad with strapped cement sheets. Double hung, paned windows with segmental arched pediments above, line the sides of the hall, and paned windows and ticket openings flank the central front entrance. The interior of the main hall has a coved, decorative pressed metal ceiling, with pressed metal ceiling roses and ventilation openings. An original landscape scenery back drop remains in place at the rear of the stage. Interior walls of the foyer and the hall have timber dados, strapped cement sheet wall cladding and pressed metal ceilings." It points out that the building's significance lies in "its association with Marjorie Lawrence, who became the leading dramatic soprano for the Paris Opera Company and also triumphed in New York, performing with the Metropolitan Opera." Check out http://vhd.heritage.vic.gov.au/places/result_detail/112523.

Barwon Park Mansion
Located 3 km north of Winchelsea at 105 Inverleigh Road, Thomas Austin's Barwon Park is a two-storey bluestone mansion with 42 rooms, a distinctive cast-iron veranda and a rich feast of delicate cast-iron lacework. It was originally the home of noted pioneer pastoralist, Austin, his wife and their eleven children. Sadly Austin lived only six months after the house was completed. His widow continued in the house for the next forty years. The grand building was apparently prompted by Mrs Austin's embarrassment when, in 1867, she was invited to accommodate and entertain the Duke of Edinburgh in the original house. When the new homestead was completed, at the cost of £10,000, in 1871 it was the finest and most celebrated mansion in western Victoria. A special ship was chartered to convey the house's cedar, oak, marble and stained glass from England. There is an elaborate entry hallway, a fine oak and cedar staircase and a high-quality crafted interior. It was bequeathed to the National Trust and they open it from 11.00 am to 4.00 pm on Wednesdays and Sundays with tours running on the hour from 11.00 am to 3.00 pm, tel: (03) 9656 9889. Check out https://www.nationaltrust.org.au/places/barwon-park for more details.

Ingleby Homestead
Located at 765 Ingleby Road, 14 km west of Winchelsea, Ingleby was settled by Thomas Armytage and his family whose pastoral empire was established in 1836. When Thomas died in 1842 Ingleby passed into the hands of his brother, George Armytage Jr. The Victorian Heritage Database takes up the story: "George Armytage Jnr decided to replace his original house with a substantial home on the Ingleby property ... [he] chose the accomplished Geelong architect Edward Prowse for the design ... In 1882-83, important additions were made to the station when the substantial woolshed and a further range of station buildings were added to the design of architect AT Moran. In the early years of the twentieth century, the agricultural property began to be broken up. In 1910 and 1911, parts of the estate were sold off and Ingleby has undergone a further process of reduction in estate size over the years." It notes that the significance of the homestead is that it is "a major surviving work of the accomplished Geelong architect Edward Prowse who also designed The Hermitage in Geelong for Thomas Armytage's father George Armytage Snr. The Ingleby homestead and station buildings form an important and intact pastoral complex. The large T-plan woolshed is of particular significance for the unusual use of subdued classical architectural decorative elements in a building of otherwise utilitarian character." For more details check out http://vhd.heritage.vic.gov.au/places/result_detail/1233. The property with 339 ha of land was offered for sale in late 2019 with estimates of around $4 million.

* Prior to the arrival of Europeans the area was home to the Wathaurong Aboriginal people.

* The first Europeans to reside in the area were squatters who established grazing runs c.1837.

* The town developed around the Barwon Inn and a general store, both of which were established in 1842 on the coaching route between Geelong and Warrnambool.

* An Anglican church was built, with financial help from the local grazier, Thomas Austin, in 1846. A school was opened that year.

* Thomas Austin loved shooting and, in 1859, he imported quails, pheasants, foxes and 24 rabbits for that purpose. He is often "credited" with creating Australia's substantial rabbit problems.

* The Winchelsea Road District was proclaimed in 1860.

* The Duke of Edinburgh visited Thomas Austin 1867 and his hunting party shot either 400 or 1000 rabbits in an afternoon. That year saw the building of the stone arch bridge across the Barwon River and the local Shire Office.

* By the mid-1860s land in the area was becoming available for selection.

* The Presbyterian Church was built in 1870.

* A Temperance Hall was opened in 1876. That year saw the opening of a railway line from Geelong.

* Albert Jacka, the first Australian to win a Victoria Cross in World War I, and future mayor of St Kilda, was born at Winchelsea is 1893. At Gallipoli in 1915, Jacka killed seven Turkish soldiers after four of his comrades had been killed or wounded.

* In 1977 the first issue of the Winchelsea Star was published.

* The town was connected to a sewerage system in 1983.

The local Shire website - https://www.surfcoast.vic.gov.au/Experience/Tourism/Key-towns - has a downloadable PDF on Winchelsea which is very useful. 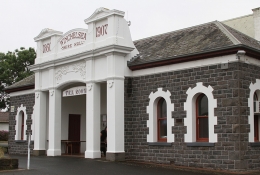 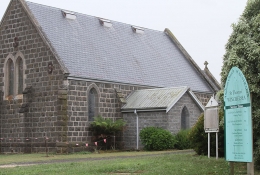