Village noted for its picturesque, historic church on the eastern shore of the Tamar River.

The tiny village of Windermere on the eastern shore of the Tamar River is notable for only one thing: the particularly attractive, historic and beautifully located St Matthias Church which is a popular destination for weddings.

Windermere is located 222 km north of Hobart via the National Highway and 24 km north of Launceston on the eastern shore of the Tamar River.

The first settler in the area was Dr Matthias Gaunt who arrived in Van Diemen's Land in May, 1831. Granted land on the Tamar River, Gaunt named it after the beautiful and largest lake in the Lake District, Lake Windermere.

St Matthias Church
St Matthias Church, which was completed in 1842, claims to be the oldest, continuously used church in Australia. It was designed by a Launceston architect, Robert de Little, and built in a Colonial Gothic style, by Henry Howard. The first service was held in November, 1843 and it was consecrated on 18 April, 1845 by the Right Reverend Francis Russell Nixon, the first Anglican Bishop of Tasmania.

In his paper The Story of St Mattias' Church, the historian E.C. Rowland writes: "There is no evidence that Dr. Gaunt practised his profession after his arrival, but he planted a vineyard which produced good wine and he was also the owner of sawmills, which  won a first prize in the Great Exhibition held under the aegis of the Prince Consort in London in 1851.
"Dr. Gaunt fulfilled a promise made to his wife before they left England to provide a church if there was none where they settled, when he gave the site and set about the erection of a church at Windermere. Aided by a local subscription of £60 and a grant of £40 from the Society for Promotion of Christian Knowledge (S.P.C.K) he financed the building of the church which was begun in 1842 and completed in 1843. The local newspaper reports that one boat from Launceston laden with bricks for the church was sunk in deep water just before reaching Windermere. It is possible that convict labour was used in the erection. In November 1843, the Archdeacon of Launceston, the Rev. Dr. D.W.H Browne, conducted the service at which the church was opened for public worship. Occasional services were then held in the Church, when the Rev. T.H. Forster officiated. On April 18th, 1845, the first Bishop of Tasmania, The Rt. Rev. Francis Russell Nixon, consecrated the new Church and its cemetery, the first Church in the North which he consecrated. The Rev. A Davenport was appointed Chaplain at Windermere in the same year, after which services were held regularly. Mr Davenport became Cannon of St David’s Cathedral in 1872, when the Cathedral Chapter was first formed, and the Archdeacon of Hobart in 1880. Dr. Gaunt built a cottage for the chaplain and Mr. Davenport was the first to take up his residence there. In later years the centre of the parish was transferred to the west bank of the Tamar, and the cottage reverted to Dr. Gaunt who renamed it ‘The Grange’."
The church's setting is inspirational and it is popular for weddings. The jetty nearby is not only used by enthusiastic anglers but by wedding parties who, looking for something different, make their way across the Tamar from the Rosevears Hotel which lies directly opposite.

* The area was settled in the early 1830s by Dr Matthias Gaunt who had arrived, on the ship Eliza, in Van Diemen's Land with his wife and five sons on 2 May, 1831. They were immediately granted 2,560 acres (1050 ha) on the Tamar River and Gaunt named it Windermere after the largest lake in England's Lake District.

* In 1842 Gaunt donated an acre of his land and spent £100 building a church on his property which he named St Matthias after himself. He is buried in the cemetery.

* Today the church is popular for weddings and there are fortnightly church services on the second and fourth Sunday of each month at 9.00 am

* to admire and debate St Matthias Church - is it really the oldest continuously used church in Australia? 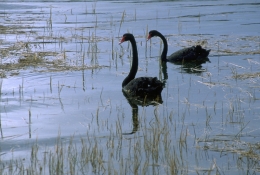 Black swans on the Tamar at Windermere 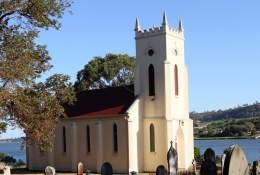